With the sequester, the USPTO has slowed its operation somewhat over the past two months. As a result, fewer patents issued per week in May/June 2013 than in prior months. However, the Office is still on track to issue a record number of patents in 2013 — an approximate 5% increase over 2012. The recent spate of subject matter eligibility cases is not expected to have any discernible impact on this result. The following chart is updated through June 27, 2013 and shows the number of utility patents granted per calendar year with a projection for the second half of 2013 based upon the first-half returns. 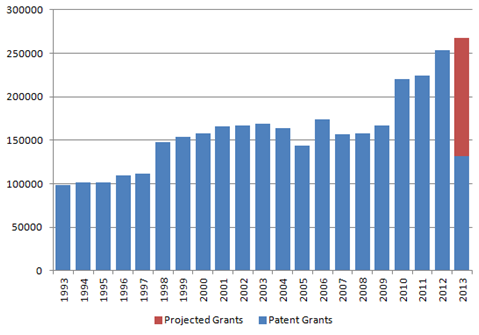