By Dennis Crouch In re Hoffman (Fed. Cir. 2014) (non-precedential decision) Gene Hoffman and David Lund’s patent application is directed to method of weakening the strength of tropical cyclones by delivering super-coolant from an aircraft into the eye of the hurricane. The inventors here have never tested their method, but did provide some preliminary calculations that – they argue – suggest success. 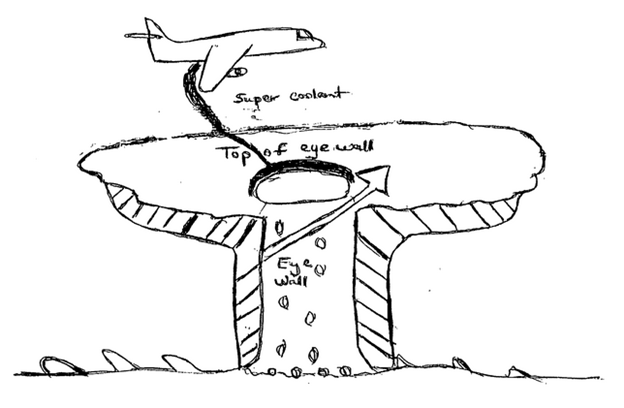 The USPTO rejected the application for failing to enable the claimed invention under 35 U.S.C. 112(a). In particular, the examiner identified three failures: (1) the preliminary calculations contained unexplained assumptions and mathematical errors; (2) the specification noted a need for experimentation to determine the proper amount of coolant to add and the optimal strike time; and (3) a number of weather scientists have expressed doubt as to whether similar approaches would work. In reviewing the rejection, the PTAB affirmed and that decision (rejecting the application) has now been affirmed on appeal. Pending claim 36 is identified as representative and claims:

A process for disrupting a formed or forming tropical cyclone eye wall or eye or center of lowest pressure comprising:

Introduction of a super coolant chemical agent sprayed with force (the super coolant is stored in a vessel under pressure) and or released from pre-measured containers from an appropriate number of large aircraft to reduce the temperature within the eye wall (top to bottom at sea level),

[t]hereby reducing the wind and storm surge of the eye wall or raising the pressure in the eye or center of lowest pressure and converting it back to a tropical rainstorm.

The claim form here does not really follow the standard ordinarily used by professional patent drafters. Here, it appears that claim drafting and prosecution were handled pro-se by the inventors. For more than 150 years, patent law has been seen as an arcane area of law full of traps for non-experts. In some ways, this decision confirms that tradition. The first sub-section of 35 U.S.C. § 112 requires that the patent document disclose enough about the invention so as to enable an artisan skilled in the particular area of science and technology to make and use the invention. The statute reads:

[The patent must disclose] the invention, and of the manner and process of making and using it, in such full, clear, concise, and exact terms as to enable any person skilled in the art to which it pertains, or with which it is most nearly connected, to make and use the same.

35 U.S.C. §112(a). The court has added some gloss to the statute in that precedent allows missing elements from the specification so long as the skilled artisan could fill-in those gaps without undue experimentation. The court also uses the “Wands factors” to help determine whether the disclosure meets the enablement standard. These factors include:

In re Wands, 858 F.2d 731 (Fed. Cir. 1988). In applying these, the Federal Circuit found that there was no doubt that the USPTO’s decision was correct. Although the court did not go into depth in its analysis, one interesting aspect of the decision is that the Federal Circuit identifies skepticism in the scientific community as the most important factor here. The court writes:

And perhaps most significantly, the very efficacy of the method itself is subject to considerable doubt in the scientific community.

In other words, the enablement burden is more difficult to meet when the invention is surprising or when it goes against conventional wisdom. Of course, those same inventions will more easily surpass the central patentability test of non-obviousness. My point here, though, is that patentees with clearly groundbreaking inventions should take extra pause to ensure that the surprising result has been properly enabled.