Recently, Hal Wegner has been circulating and commenting upon the qualifications of patent law professors. For example, he lists whether patent law professors at the Top Ten IP programs as ranked by US News & World Report are licensed to practice at the USPTO, have an “understanding” of international/comparative patent law, or clerked at the Federal Circuit (see below). According to Wegner, these “credentials” are “particularly” and “uniquely” valuable (in some cases, “essential”) for professors to make “optimum” patent policy reform proposals, especially those concerning PTO practice and international harmonization.

(To provide some background, I provided Wegner a list of names of all professors in the U.S. who currently teach and write about patent law at US News ranked and unranked IP programs, with the understanding that he would circulate the list to his readers. After I sent Wegner my list, without my input, he annotated it (along with other names) with various credentials and provided commentary and alternative lists, such as the one reproduced below. Because I believe Wegner’s analysis is flawed—and given my initial participation—I feel personally obligated to respond.) 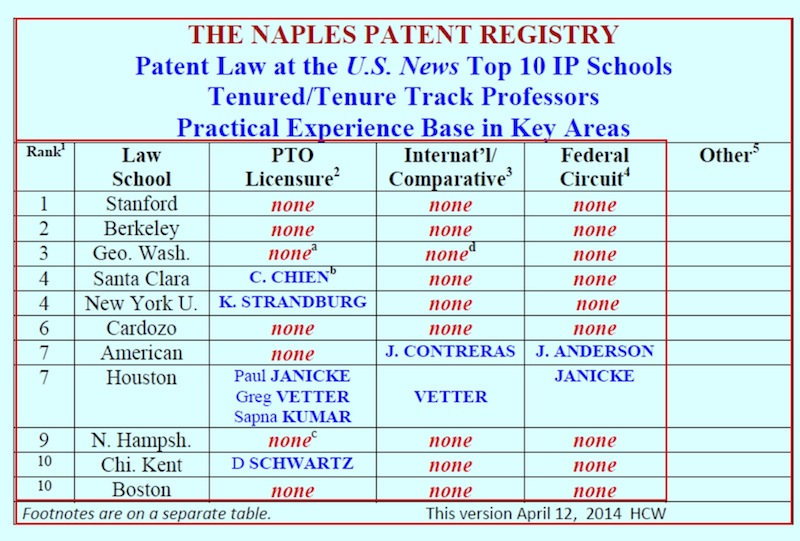 Notably absent on Wegner’s list above are any professors from Stanford, Berkeley, and George Washington (GW), the top ranked IP programs in the nation. (The same holds true for many other schools, both in and outside of the top 10. I focus on the top three schools to underscore the problems with Wegner’s approach.) Rather than effectively denigrate these programs, Wegner should have recognized the transformative role that these schools have played historically (for GW) and more recently (for all three schools) in elevating patent law to a prominent place in the academy and developing unparalleled educational opportunities for future patent professionals and scholars.

Importantly, an unintended implication of Wegner’s discussion is that patent law professors without the stated qualifications—particularly, a patent bar registration number—are unfit to teach and write about patent law more generally. For instance, on his e-mail blog, Greg Aharonian recently circulated the comments of an anonymous patent lawyer who referred to Stanford’s Mark Lemley as “one of a small army of law school academics that have built very successful . . . careers studying intellectual property law, especially patent law, albeit without ever actually having practiced before a patent office, done research, or even studied science or engineering.”

These sorts of criticisms are misguided. First, many patent law professors have extensive patent litigation experience, including on-going experience as “of counsel” lawyers, experts, and consultants. Although having patent prosecution experience is clearly beneficial for teaching and writing about patent law, patent litigation is as well and should not have been disregarded. For instance, Wegner and Aharonian presumably know well that Mark Lemley is a partner at a top-tier IP litigation boutique, Durie Tangri, and spends numerous hours on real-world matters. In fact, he has argued or is scheduled to argue three Federal Circuit patent cases so far this year, has argued before the Federal Circuit eleven times (in addition to four arguments in the regional circuits), and has represented another ten parties on briefs in the court. Additionally, he has been counsel for a party in the Supreme Court twice in patent cases (both patentees, incidentally). Lemley has been the lead author or co-author on 40 amicus briefs in the Supreme Court and the courts of appeals. And if that were not enough, his articles have been cited nine times in Supreme Court opinions and 145 times by courts overall. Finally, he’s conducted extensive empirical analyses of USPTO and judicial practice in many academic papers. (Ah, I forgot to mention that he’s represented parties in 85 cases in the district courts, too.)

So Lemley clearly is highly qualified (in fact, uniquely qualified) to write about and teach patent law. Nonetheless, Lemley often is maligned by practitioners because of a proposal he made (along with now Federal Circuit Judge Kimberly Moore) about a decade ago to restrict continuation practice. Yet, regardless of whether you agree with his views—and I often disagree with him—he’s clearly well-situated to write about and suggest reforms concerning PTO practice, the Federal Circuit, the Supreme Court, and the Patent Act more generally. In this regard, Lemley has written over 125 articles, many of them offering outstanding suggestions to reform the patent system, such as his idea for “gold-plated” patents. Lemley should not be unfairly singled out for one unpopular proposal or simplistic mischaracterizations of his views.

In a response to e-mails Wegner received asking why patent litigation was not listed in his chart, including one of my own, he responded that while patent litigation “may well be the best practice background for a patent academic . . . . no patent faculty seeking to make an optimum contribution to patent policy or harmonization can do so without  someone on the faculty having expertise in international/comparative and Agency practice.” Wegner’s position is too sweeping. Although it is certainly useful to have faculty members who have prosecution experience—and Wegner’s criterion of simply having a patent bar number is in any event not too indicative of such experience—it isn’t necessary to have such experience to make outstanding policy proposals, even when it comes to PTO practice. Indeed, only a few judges at the Federal Circuit itself would meet such criteria. It seems hard to fathom that Wegner believes that the Federal Circuit cannot make an “optimum” contribution to patent policy, including practices at the PTO, given their lack of such credentials. The same should hold true for academics. And to go one step further—as does the anonymous lawyer’s blanket assertion on Aharonian’s e-mail blog that a professor cannot sucessfully “study,” write about, or presumably teach patent law without having worked as a patent prosecutor or an engineer—is simply preposterous.

Second, many patent law professors, such as UC Berkeley’s Peter Menell and Rob Merges (also absent on Wegner’s chart)—in addition to having extensive prior and on-going experience as experts and consultants in patent litigation matters—have spent numerous hours writing casebooks and patent law practice guides. Rob Merges and John Duffy’s Patent Law and Policy is the leading patent law casebook, and contains extensive commentary from its authors. Merges is also co-founder and Senior Policy Advisor of Ovidian LLC, a Berkeley-based consulting and informatics company specializing in assessing and valuing patent portfolios. That experience is invaluable for the next generation of patent law professionals working in the emerging patent “marketplace.” Finally, because Berkeley—like GW and Stanford—offers separate courses in patent prosecution and patent litigation taught by prominent practitioners, it is hard to see how its students are not getting broad, deep, and practical exposure to patent law.

After co-founding the Berkeley Center for Law & Technology (BCLT) in 1995, Peter Menell soon began working with a team of top patent and other IP litigators to provide an annual four-day intensive training program on IP law and case management for federal judges, as well as numerous other national and regional events. That work led to the development of the Patent Case Management Judicial Guide, a comprehensive treatise that has been referred to as “the bible” for judges and litigators. Menell has also worked with district courts on the development and revision of patent local rules and filed amicus briefs in important IP cases. He also served as one of the PTO’s inaugural Edison scholars. His empirical research on patent claim construction with Jonas Anderson, a former BCLT Fellow—in which they reviewed every claim construction order issued by the Federal Circuit since 2000—was cited numerous times in the Federal Circuit’s recent en banc Lighting Ballast decision. Any comprehensive evaluation of patent law programs would value these qualifications.

The same holds true for professors who write about specific topics in patent law, but do not teach it. For instance, Berkeley’s Pam Samuelson is a world-renowned copyright expert and a winner of the “genius” grant from the John D. & Catherine T. MacArthur Foundation. She occasionally writes about software patents, including for her column in the Communications for the Association for Computing Machinery (ACM) journal, which is mainly read by software and computer science professionals. As Professor Samuelson’s work shows, one need not be an expert on every nuance of the patent system, especially the nitty-gritty of prosecution, to make sound reform proposals.

Other academics are permanent and full-time but not on the “tenure-track.” For example, BCLT Executive Director Robert Barr—who directs the Berkeley IP program and organizes numerous IP events there—is former chief patent counsel at Cisco, is licensed to practice before the PTO, and has long been a leader in the Silicon Valley and national patent law community. Along with John Whealan—former Solicitor at the PTO and another highly-regarded national leader in patent law who directs GW’s IP program—Wegner left Barr off the list.

Finally, many patent law professors have significant industry experience. For example, blog commenters on a recent Patently-O post of mine referred to me as “ivory tower” and as having “a lack of ‘real world’ experience.” In fact, before becoming a law professor, in addition to practicing patent litigation for four years, I founded three tech companies, raising nearly $5 million in financing, including being CEO of Unified Dispatch, a software company that makes innovative speech recognition systems for ground transportation companies. At Unified Dispatch, I designed and oversaw most of the company’s software products, which included writing detailed specifications and managing programmers and other engineers, and was the lead inventor on several patent applications and one patent. As part of that process, I also managed our outside patent counsel for several years during prosecution. Before attending law school, I earned an M.S. in Physics. Since becoming a patent law professor, I’ve consulted and served as an expert on an-going basis in patent litigation matters and related projects. So not only is the “ivory tower” label is inaccurate, it also misapprehends the often close ties between academia and practice.

The same sorts of backgrounds and relevant experience hold true for many other academics who teach and write about patent law. For example, Donald Chisum—yes, the author of the leading patent law treatise—is not registered to practice before the USPTO (he majored in philosophy). Granted, practicing before the PTO is helpful to writing about PTO practice, but would anyone doubt that Chisum is sufficiently knowledgeable to do as much?

I commend Hal Wegner’s efforts in calling attention to the patent law programs and scholars (which is why I assisted him in the process). There are clearly limitations to the US News ranking system, and I agree it’s valuable to see the credentials of those teaching at patent law programs across the country. However, it was irresponsible for him to omit the founders and leaders of many of the most important IP programs on his list of academics with “practical experience” in “key areas” merely because they don’t have a patent bar reg #, don’t have a deep understanding of comparative patent law, didn’t clerk for the Federal Circuit, or aren’t technically “tenure-track.” Patent litigation, industry experience, and other credentials are just as relevant.

Even more troubling is Wegner’s assertion that having someone on the faculty with one of his criteria is “essential” for making “optimum” policy proposals. And most troubling is that Wegner provides fodder for commenters such as those on Aharonian’s e-mail blog that professors without such credentials cannot successfully write about or apparently teach patent law more generally, not to mention commenters on this blog calling professors like me “ivory tower,” when it is simply not the case. Wegner and the commenters should do their homework. Otherwise, their “analysis” remains at best misguided and at worst scapegoating.

Berkeley and Stanford serve—and, historically, GW has served (and soon again will serve)—as model programs for training patent practitioners, scholars, and judges. The same holds true for many law schools I have omitted in this short blog post. Rather than denigrate these schools, Wegner would have done better to highlight the tremendous value offered to students and the patent law community more generally from this talented and highly qualified group of scholars.