Guest Post by Prof. Shine Tu.  Dr. Tu is an Associate Professor of Law at the West Virginia University College of Law and a shareholder in PatentCore. His research focuses on large-scale empirical studies of the patent examination system.

This study uses two new patent databases, that code for nearly 1.7 million patents and approximately 12,000 patents that were litigated between 2010 and 2011.  This study determined that litigated patents mainly come from primary examiners who grant between 45-60 patents per year with between three to five years of experience.  These examiners are contributing to the litigated patent pool at a higher rate than expected.  Interestingly, the highest volume primary examiners (examiners who on average grant more than 80 patents per year and have more than 8 years of experience) do better than expected. 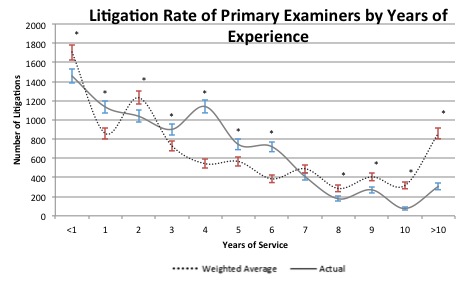 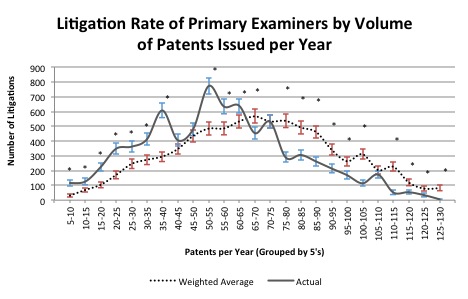 There are many limitations to this study.  First, the database that we use is a broad database but suffers from some selection bias due to the examiner-matching step. Specifically, temporal selection bias occurs in the database since the examiner database contains only those patents that were issued between 2001 and 2012. Accordingly, litigations dealing with “older patents” (i.e., those patents issued before 2001) are not included in our database. Additionally, since we only have data starting from 2001, there may be a “left justification” issue.  Because we start at 2001, examiners who have worked prior to 2001 (inclusive) will be coded as working less years than they actually have worked.  For example, if an examiner started working in 1998 and quit in 2003, our database would code the examiner as working for 3 years, while in actuality the examiner was at the office for 6 years. We are currently segmenting the data to account for these examiners.  Accordingly, our results may be slightly positively skewed.

Another limitation is based on the fact that there are many reasons to bring litigation, but many of these reasons may not represent errors by the patent examiner. For example, a patent could be litigated and found invalid because of inequitable conduct. In this situation, the patent examiner may have issued a valid patent based on the fraudulent information given to her by the applicant. Another example deals with a patent that was found valid, but non-infringed. Here, the litigated patent may have been correctly issued, but litigated due to incorrect interpretation of the scope of the claims. Accordingly, simply because a patent is litigated, does not mean that there were errors made at the patent office.

To address these issues, we are currently working on a study that reviews only those patents that have been litigated to final judgment and found invalid. We then connect these invalidated patents to their corresponding examiners to determine if there are any common characteristics among the examiners who issue invalidated patents. However, we note that the pool of litigations that are litigated to final judgment dramatically reduces the sample size.