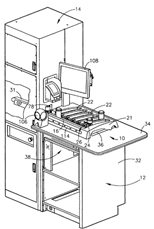 Although the technology at issue here is largely mechanical (a pill collating machine), the case is akin to a genus-species debate and also relates closely to the ‘essential element‘ pseudo-doctrine of Gentry Gallery.

Here, all of the examples of the patented collating machine include a set of sensors used to determine whether a particular holding area is full. Further, the specification suggests that – even at its broadest – the invention includes the sensors: “[T]he present invention broadly includes . . . a plurality of sensors.” However, the claims do not include sensor limitations – with the result being that machines both with and without the sensors could be seen as infringing. Seeing that discrepancy between the specification and the claims, the district court ruled that the original written description does not show that the inventor possessed a collating machine that operated without the sensors and thus that the claims covering machines sans sensors fail the written description test. Judge Murguia wrote:

Based on the record before it, the court concludes that no reasonable jury could find that the inventors were in possession of a collating unit that operated without sensors. Innovation is therefore entitled to summary judgment on its claim of invalidity as to all challenged claims.

On appeal, the Federal Circuit has reversed – finding that summary judgment was improper.

It is common, and often permissible, for particular claims to pick out a subset of the full range of described features, omitting others. A specification can adequately communicate to a skilled artisan that the patentee invented not just the combination of all identified features but combinations of only some of those features (subcombinations)—which may achieve stated purposes even without omitted features.

. . . There is no sufficiently clear language in the specification that limits the invention to a collating unit with the (slotchecking) sensors. And considering what the specification does say, and what ScriptPro highlights as a central purpose of the claimed advance in technology [keeping track of open slots – a function that does not require the sensors], it cannot be said as a matter of law that claims 1, 2, 4, and 8 have a scope incommensurate with what is described as the invention. . . . The term “broadly” qualifies the assertion of inclusion [and] suggests that exceptions are allowed to the assertion of what occurs most (perhaps even almost all) of the time.

Here, the court thought it important – although not determinative – that the original application as filed included the non-sensor claims. Thus, this is not an example of an ex post attempt to expand scope that is most common in written description cases.

The notion is that original claims are part of the specification and thus relevant. However, they are also potentially inadequate (as we learned in Ariad and LizardTech).

Not a Summary Judgment Question: One lens for considering this case by recognizing that the failure of written description is a factual question to be decided by a jury. Although it may not ultimately win on the issue, the patentee presented a factual argument supported by expert testimony regarding what a person of skill in the art would have recognized based upon reading the specification. What the court here ruled is that that presentation of evidence by the patentee was sufficient to defeat the defendant’s summary judgment motion of invalidity. We may eventually see a jury verdict in this case — ~10 years after the lawsuit was originally filed.

103 thoughts on “Specification describes machine with sensors – Can you omit the sensor limitation in the claims?”