It has now been just over 18-months since we started filing patent applications under the new first-to-file patent system mandated by the America Invents Act (AIA) of 2011.  And, slowly but surely, FTF patents are now beginning to issue.  Those new patents also bring us into a new era of Post-Grant-Review-Proceedings (PGR).

My expectation is that PGR will quickly prove itself as an incredibly powerful tool for challenging patents. Importantly, PGR proceedings allow a third party to challenge the validity of a patent on any of the validity grounds that could be raised in court as a defense under 35 U.S.C. 282 – these include novelty, obviousness, written description, enablement, indefiniteness, utility, and subject matter eligibility. This list represents a major expansion of challenge-justifications over inter partes review (IPR) proceedings or reexaminations. These same doctrines have already been available for covered-business-method review (CBM) proceedings and have been used successfully if only on a narrow class of patents (those covering financial business methods).

Two recent PGR proceedings have been filed.  In one case, LaRose Indus. has challenged Patent No. 8,684,420 that covers the popular children’s “Rainbow Loom.”  Although the patent claims a 2010 priority date, the particular application was filed as a continuation in July 2013 and, at least according to the petitioner, added new mater to the claims at that point.  The second case PGR case involves Patent No. 8,598,291 that covers a liquid formulation of a particular nausea control drug used by chemotherapy patients. The petition argues that the claims fail the requirements of written description, enablement, and definiteness.

The most important limitation on the PGR process is the relatively short 9-month window for filing a PGR petition. Namely, the petition must be filed within 9-months of the patent issuance.  This puts some pressure on parties to monitor competitor patents and patent families.  It also provides patent owners at least some incentive to hold-off asserting their patent until after that window has closed (unless the patentee would welcome the review).  I suspect that the set-up in the LaRose Rainbow Loom market will be fairly common. The patentee (Choon) had previously sued LaRose on a previous patent and so LaRose has been closely monitoring the continuation applications.

In thinking about how soon the AIA cases will come on-board, I created the chart below. The chart provides some information on the timing of patent issuance — showing the percentage of patents issued with 18-months of filing and 36-months of filing respectively.  A big caveat for this particular chart is that it looks at the actual application filing date and does not consider the priority date that will typically control whether a patent will be examined under the AIA. Thus, even at the three-year date (March 2015), I would expect that significantly less than half of the recently issued patents would be FTF patents.

You’ll note the trend beginning in FY2011 of issuing more patents more quickly.  I largely attribute the change to two initiatives pushed by David Kappos during his term as PTO Director that resulted in (1) more funding to hire more examiners; and (2) a greater allowance rate.  Those factors have continued through the succeeding interim leadership terms of Terry Rea, Peggy Focarino, and now  Michelle Lee. 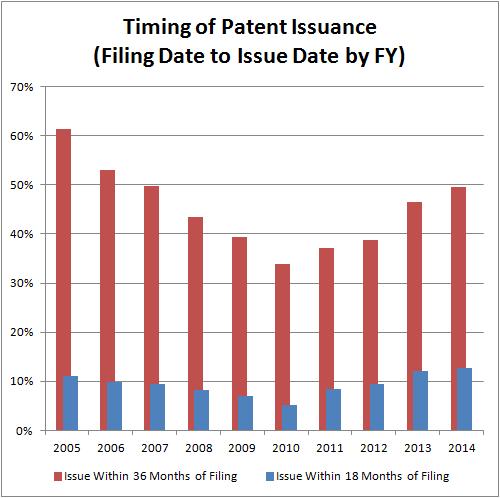