Guest Post by Dr. Kate Gaudry and Prof. Shine Tu.  Professor Tu is an Associate Professor of Law at the West Virginia College of Law.  Dr. Gaudry is a patent attorney with Kilpatrick Townsend.

The Sensitive Application Warning System, or SAWS, program is a secretive program operated by the U.S. Patent and Trademark Office that flags certain patent applications for a heightened level of scrutiny. In October 2014, the PTO responded to one of our requests for information about SAWS. This post discusses the data the PTO provided, highlights areas where it is incomplete, and explains our concerns about the information the PTO declined to provide.

The SAWS program operates like this: If an examiner determines that a criterion applied to an application being examined, he/she is to propose that the application be characterized as a SAWS applications. When an application is entered into the SAWS program, multiple other people (seemingly up to eight or more people) must review and approve examiner-proposed notices of allowances. This enhanced-scrutiny review can negatively impact the applicant. For example, it would likely result in a reduced probability that an application would be allowed, an increased number of office actions issued and an increased pendency. Further, it would appear to prevent the applicant from being able to talk to (via an interview) or even identify the decision-makers controlling an application’s fate. Despite these potential consequences, applicants are not informed when an application is entered into the SAWS program, and the PTO refused to respond to multiple of our requests to identify SAWS application numbers. The PTO instead has insisted that SAWS has a minimal impact on prosecution. (See http://www.corpcounsel.com/id=1202678064286/Secret-PTO-Program-Delays-Patent-Approvals.) This conclusion would be surprising given the structure of the program, and is contradicted by our preliminary data.

Sixty pages of memos indicated that there were approximately 100 SAWS-eligibility criteria. Some criteria seem reasonable: for example, “applications claiming inventions which would endanger individuals, the environment, the security of our nation, or public safety.” However, some criteria seem extremely broad, vague and/or frivolous, such as applications “dealing with inventions, which, if issued, would potentially generate unwanted media coverage;” “disclosing seemingly frivolous or silly subject matter;” “with claims of pioneering scope;” “claiming the prevention or curing of diseases which were previously considered impossible to prevent or cure, such as … Alzheimer’s disease, … [or] HIV infection;” and “[directed to] smartphones and other convergence-intensive devices.”) (A full summary of the released SAWS information and criteria can be found here: http://www.kilpatricktownsend.com/en/Knowledge_Center/Publications/Articles/2014/12/Secret_PTO_Program_Subjects_Apps_To_Heightened_Scrutiny.aspx). Given the breadth and vagueness of these categories, we are concerned that the SAWS program seems to be designed to allow the PTO to arbitrarily heighten the criteria of patentability for certain applications.

The PTO recently granted one or our requests to identify high-level statistics pertaining to the program. An initial report of some of these statistics can be found here [http://www.kilpatricktownsend.com/en/Knowledge_Center/Publications/Articles/2015/01/Secret_PatentExamination_Program_Rare_But_Consequential.aspx]. In sum, the PTO provided data regarding the total number of applications that were flagged for SAWS evaluation in fiscal years 2006, 2008, and 2010 having each of three statuses: patented, pending or abandoned. Additionally, the PTO provided information segmenting these applications based on technology center assignment and prosecution statistics for individual application sets (each set corresponding to a SAWS designation, filing year and current status).

In short, very few applications are evaluated under the SAWS program (approximately 1 in 2500). However, for those that are – contrary to the PTO’s contentions – the PTO’s own data shows that the SAWS program has a sizable impact on prosecution, both in increasing prosecution duration and reduction in allowance rates. 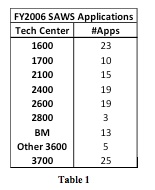 FIG. 1 below breaks this result down by technology center. (“BM” is representative of the business-method art units in technology center 3600, which includes art units 3621-29, 3681-89 and 3691-96.) As shown, SAWS applications are generally substantially less likely than other applications to have issued as patents (FIG. 1A) and are substantially more likely to be pending (FIG. 1B). 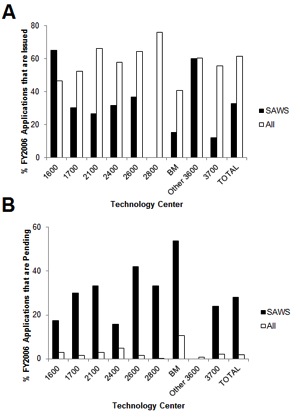 What we can, at least quantitatively, evaluate are those applications that the PTO eventually determined were worthy of a patent. As initially reported in the above-referenced Law360 article, the prosecutions of these patent-worthy applications were dramatically affected. In particular, it took substantially longer to receive notices of allowances. FIG. 2 is a new graph showing the time from application filing to patent issuance for SAWS patents and other patents filed in fiscal year 2006, separated by technology center. 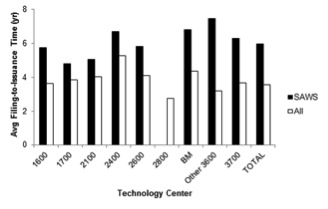 The prosecution delay could be, due to additional office actions issued against SAWS applications. For applications filed in fiscal year 2006 that have issued as patents, the average number of office actions issued per patent was 4.3 for SAWS patents and 2.3 for the corps-wide patent set. Another one of our upcoming articles on IPWatchDog shows the discrepancy in office-action counts and RCE filings for individual technology centers. This increase in office-action issuances and RCE filings likely requires applicants to invest substantially more money in procurement of a patent. (In our Law360 article [http://www.kilpatricktownsend.com/~/media/Files/articles/2014/Secret%20Patent-Examination%20Program%20Rare%20But%20Consequential.ashx], we estimate the additional costs to be roughly $7000.)

The PTO is Not Recognizing the Impact of SAWS

This data seems to suggest that the enhanced scrutiny of SAWS is not innocuous. Nonetheless, the PTO seems to be in denial of the data that the agency itself provided. As reported by Corporate Counsel [link to: http://www.corpcounsel.com/id=1202716358836/Data-Shows-Impact-of-PTOs-Secretive-Patent-Program] a PTO spokesperson said, in response to this data that “any time added to the prosecution of the patent is usually minimal.” Given that the average added delay is three years, this assessment seems to be inaccurate.

The PTO is Hiding its SAWS Classifications

The PTO has been repeatedly asked, by us and by others, to indicate whether particular applications are being evaluated under SAWS and/or to identify all SAWS applications. The PTO repeatedly refuses to do so. The agency asserts that the information is privileged as part of an agency’s deliberative process. Dennis Crouch has previously explained why he believes that this privilege assertion is misplaced. [Link to https://patentlyo.com/patent/2015/01/sensitive-application-warning.html] Even if the privilege was proper (which the authors concur is not for multiple reasons), such privilege in this instance could be waived by the PTO. For the sake of transparency and to allow applicants to stay informed as to the true status of their applications, the PTO should choose to release such information. Such disclosure would also allow applicants to be able to identify who the true decision-makers are in relation to SAWS matters, rather than undergoing frustration with seeming inconsistencies between conversations (at which allowable subject matter is identified) with an examiner and official papers issued by the office (nonetheless rejecting an application).

If we assume the SAWS program is a procedural, and not a substantive, rule, the PTO could have authority to promulgate such a rule. (The PTO does not have authority to make substantive rules.) However, procedural rules must be appropriately enacted. The PTO frequently complies with informal notice-and-comment rulemaking procedures (e.g., as opposed to formal rulemaking procedures). However, with regard to SAWS, neither notice nor comment opportunity were provided.

Up until December 2014 (shortly after our first Law360 publication http://www.kilpatricktownsend.com/en/Knowledge_Center/Publications/Articles/2014/12/Secret_PTO_Program_Subjects_Apps_To_Heightened_Scrutiny.aspx conveying to the public the SAWS information we received), the PTO seemed to have no mention of SAWS on their website or in the MPEP. Even the new PTO website acknowledging the program [http://www.uspto.gov/patents/init_events/Sensitive-Application-Warning-System.jsp] does not include any information about how the program actually works. Rather, it merely speaks to the program’s purpose and downplays effects on applications’ examinations.

Possible property rights seem to be affected by SAWS. Applicants subjected to SAWS appear to be less likely to be patented, and patent issuance is delayed. This delay in issuance may preclude an applicant from protecting an invention during a critical time (e.g., critical in view of a competitive landscape, litigation, or investment opportunity). Despite these consequences, the PTO does not abide by fair procedures in relation to the program.

There is no clear criteria indicating what types of applications will be subjected to SAWS. Rather, the very broad, extensive SAWS-eligibility list could seemingly qualify many more applications to be reviewed under SAWS than the reported 0.04%.

Further, there is no disclosure as to how the program actually operates and which applications are affected. This precludes applicants from challenging or even understanding SAWS designations and immunizes the PTO from improper selection processes.

Our Call to the PTO: Be Transparent about SAWS

The PTO claims that SAWS is a mere quality-control effort, that SAWS applications undergo the same examination review as other applications, and that the SAWS process minimally affects processing delays. Nonetheless, to outsiders, this program is suspicious for at least the following reasons:

If this program is a fair program, we call for the PTO to release the SAWS application numbers and, going forward, to inform applicants when their applications have been selected for SAWS review. We are not alone in this call, as attorneys from a variety of firms [http://www.law360.com/articles/614522/attys-want-uspto-to-open-up-about-sensitive-patent-apps] stand with us in asking why the PTO has kept this program a secret for decades and why the agency is reluctant to be transparent about its prior and current SAWS reviews.

149 thoughts on “Guest Post by Dr. Gaudry and Prof. Tu – Our Call to the PTO: Release SAWS Data”