The Federal Circuit’s decision in MobileMedia Ideas v. Apple is almost comic – with the appellate panel rejecting the district court decisions siding with Apple as well as those siding with MobileMedia.  The chart below highlights the transformation. 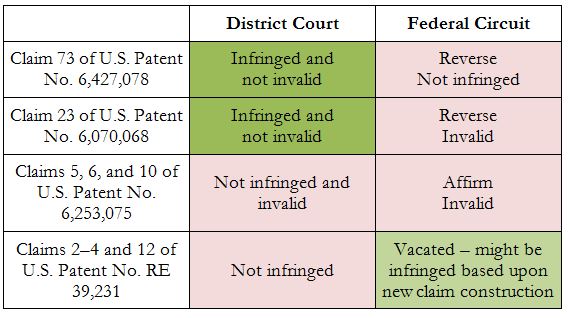 MobileMedia is an MPEG LA company that was formed as a collaboration of Nokia and Sony.

Obviousness: An interesting aspect of the decision is obviousness analysis of Claim 73 of the ‘078 patent.  The law requires that a patented invention represent a significant advance beyond what was previously known in the art. That obviousness doctrine is codified under 35 U.S.C. § 103 and serves to invalidate patents “if the differences between the subject matter sought to be patented and the prior art are such that the subject matter would have been obvious.”

Claim 73 is directed to a mobile phone with a built in camera optics and an “image sensor” along with the requisite control, capture, storage, user interface, and transmitting capabilities being directed through a microprocessor.  (App filed in 1995).

All the Elements in Two References: The prior art here follows the typical obviousness scenario. Namely all of the elements of the claimed invention are found within a collection of prior art documents, but no single reference teaches each and every element. Here those references are, Kyocera (Japanese Pub. No. H6-133081 disclosing camera phone with the image sensor and optics but somehow does not disclose the microprocessor) and Lucent (U.S. Patent No. 5,550,646 disclosing a camera device with an interface, display, and controls operating through a microprocessor).

At this point, we have the parallel scenario that the Supreme Court addressed in the oft cited case of KSR v. Teleflex (2007).  There, the Court noted “a combination of familiar elements according to known methods is likely to be obvious when it does no more than yield predictable results.”  In its flexible approach, the Court noted that such a combination should consider both (1) whether a skilled artisan would recognize the combination as a potential improvement as well as (2) whether the actual combination would be within the skill of the artisan.

[I]f a technique has been used to improve one device, and a person of ordinary skill in the art would recognize that it would improve similar devices in the same way, using the technique is obvious unless its actual application is beyond that person’s skill. A court must ask whether the improvement is more than the predictable use of prior-art elements according to their established functions.

Here, MobileMedia’s expert testified that integrating the Lucent microprocessor would actually require more skill than held by an ordinary skilled artisan (EE with 4-years experience). And, on appeal, the Federal Circuit ruled that the testimony offered “a reasonable basis” for rejecting the obviousness defense.

Fact or Law: In its analysis here, the Federal Circuit gave deference to the jury verdict — re-holding that “the question of whether there was a reason to combine certain references” is a question of fact. (citing TransOcean 2010).  However, that statement of the law appears to conflict with the approach actually taken by the Supreme Court in KSR. In addition, the particularly conclusion here – that the posed combination is beyond the level of skill in the art appears to merge together the various Graham factors in a way that leads directly to the ultimate conclusion legal of non-obviousness.  To me, that looks like the combination here is a conclusion of obviousness, which is a question of law.  The approach is consistent, however, with the approach of allowing a jury to decide all issues of obviousness.

Although this case is in the midst of infringement litigation, the law of obviousness applies equally to prosecution. Here, applicants may be interested in reviewing the expert testimony to see what carried the day in proving that the proposed combination would be beyond the skill of an ordinary skilled artisan at the time of the invention.  Here, the basic issue was not in connecting the elements together but instead in programming the microprocessor to work.

198 thoughts on “Obviousness as a Question of Fact”