One of the main pieces of empirical data being drawn upon by folks arguing for and against various patent law reform proposals is the rate of new patent lawsuit filings.  As the intellectual property scholars’ letter to Congress recently observed, while there were fewer patent lawsuits filed last year than in 2013, that year was itself a record-setting year for patent lawsuit filings.  Professor Matthew Sag’s new study, IP Litigation in the United States District Courts: 1994 to 2014, illustrates the point of rising patent litigation dramatically: in the sixteen years from 1994 until 2010, the annual number of patent lawsuit filings doubled; it doubled again in the three years from 2010 to 2013.

While Professor Sag’s study provides a comprehensive empirical look at intellectual property litigation rates across all areas, over at Lex Machina legal data scientist Brian Howard has dug deeply into the patent lawsuit filing rate numbers to examine whether the America Invents Act led to a reduction in patent lawsuit filings once the anti-joinder provision of the AIA is accounted for.  Even when  controlling for the disaggregation of multi-defendant suits, he finds a rise in patent lawsuit filings during the two years after the enactment of the AIA.  While the more recent period has seen filings turn downward, his findings about the short term effects of the AIA are surprising and worth thinking about further.

Finally, as I’ve noted in the past, I find it useful to think not just about new patent lawsuit filings, which can provide a barometer of future patent litigation activity, but also about currently pending patent litigation and lawsuit termination rates.  In my view, these provide a better (although still imperfect) gauge of what kind of patent activity courts are presently seeing.  Figures 1 and 2 below are updated versions of the pending patent lawsuit data that I’ve previously written about. 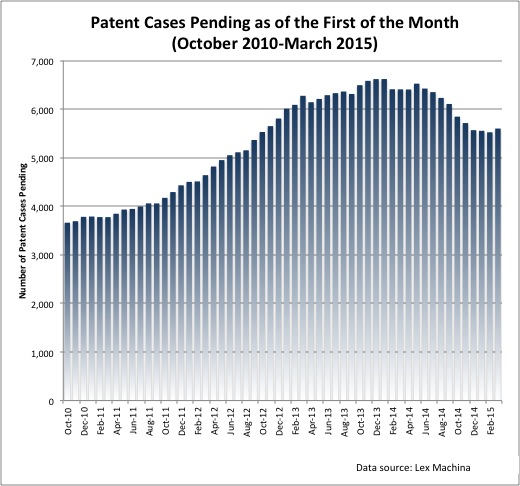 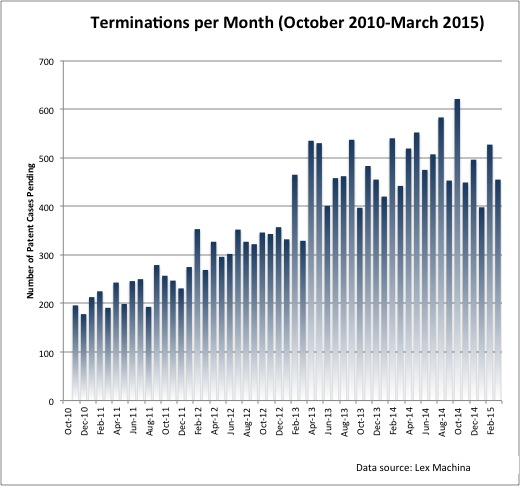 The bottom line for this data is that while pending patent litigation remains below the all-time highs of the late 2013’s and early 2014, this activity has plateaued over the last few months and even rose slightly in February.  Digging a bit under the hood of the data, this rise appears due an increase in filings over that month as opposed to a drop in terminations, with February 2015 seeing about 500 new patent cases filed—a rise of 69 over January despite the shortness of the month.  Given the close attention that is paid to patent lawsuit filing rates, I suspect that this is a point that will be jumped on by many.  The below graph shows the number of patent actions filed, using LexMachina data, on a monthly basis from August 2014 – February 2015. 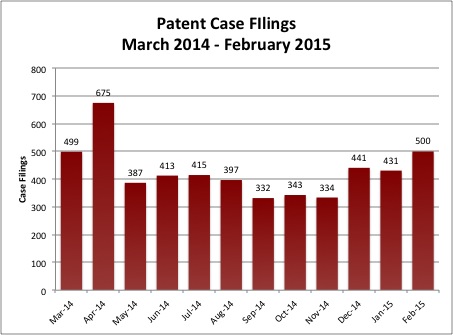