Today, the Federal Circuit heard oral argument in the mandamus petition brought in the TC Heartland case. At stake is where patentees can properly bring their cases, a question that has received an inordinate amount of attention–even from comedic TV shows–in light of the high concentration of patent filings in just a handful of venues.

We have followed this case with interest because, as we have written before, we believe that revising venue may be a reform that the patent system’s diverse stakeholders can agree upon. Although the reasons that plaintiffs flock to Eastern Texas and a few other districts are contested, we believe that a system that incentivizes skating rinks outside of courthouses to curry favor with local juries is far less defensible.

How did we get here? For nearly 90 years, it was settled law that special rules limiting venue governed patent lawsuits. Congress changed the general venue law in 1988, and the Federal Circuit interpreted this as removing the special rule (28 U.S.C § 1400)’s restrictions, enabling plaintiffs to choose, essentially freely, among district courts where to file their patent suits.

Where might we be headed? Petitioners now argue under a variety of theories that the restrictions in 28 U.S.C. § 1400(b) in effect be reinstated, and given greater effect. Other than our concerns about the end result, we take no position at this time on the legal merits of any particular argument. In any event, it’s not our opinion that matters. If the Federal Circuit agrees, patent venue would revert to either (1) defendant’s residency (place of incorporation) or (2) a combination of infringing acts plus a regular-place-of-business. Congressional proposals are expected to both broaden and narrow this definition, though we caution against the development of proposals that make it difficult for the plaintiff to determine appropriate venue without undertaking substantial discovery in the first place or that makes the determination of “real” places of business uncertain.

But the Federal Circuit will not wait for Congress. How significant would a reversion to § 1400 be? Although impossible to predict with certainty, we think it is worthwhile to consider, so we performed an analysis that attempts to model that venue rule. We considered what would have happened in 2015, had the proposed interpretation been in effect then. Last year patent plaintiffs filed 44% of their cases in the Eastern District of Texas. Where would they have filed (assuming that they would have filed at all) had the previous interpretation of Section 1400 rule been in place? That is to say, where would patent plaintiffs file if they couldn’t all go to Texas?

To carry out our analysis, we chose 500 cases at random, corresponding to 665 defendants, filed in 2015. We then carried out three steps, as described in greater depth here. First, we approximated where each named defendant could be sued according to the more restricted reading of the statute, using place of business and incorporation data provided by complaints and facility/location information provided by Reference USA, a widely-used database of business data. Second, we identified, based on where the case was actually filed, and also where the plaintiff had sued in the past, the likely venue of suit. That is, if a plaintiff sued all over the country, then we assumed it would continue to do so. But if a plaintiff sued only in one district, we assumed they would sue again in that district if it could legally do so. Third, we compared the results of the first two steps and determined the percentage of 665 plaintiff-defendant pairs (“cases” for short) that reflected the following “matches”:

The resulting analysis suffers from a few limitations. First, our data sources are likely to contain a modest number of errors and only roughly approximate permissible defendant venues. Second, though we assume that infringement took place in each district where the defendant has a location, this assumption may not hold in every jurisdiction. Third, outside of “exact” matches, it’s hard to tell with certainty where plaintiffs would choose to file – though we assume that plaintiffs plausibly would file where they have before, due to greater familiarity with the court, and that certain matches were “preferred” because we assume that P would prefer to file where others in the P’s class have filed in the past, other factors may trump. Finally, our dataset is small – only 500 cases – though we are in the process of extending the analysis. Still, we believe that the results from this initial analysis are instructive, and share them below.

As shown in Figure 1, we find that though approximately 30% of “cases” would have been able to be filed as they were, 70% of them would not have able to be filed as is. While 8% could have been filed where the plaintiff had filed before, in 62% of cases, plaintiffs would have to file in a jurisdiction they had never filed before, though 41% of the time, a jurisdiction preferred by other plaintiffs of the same time was available. 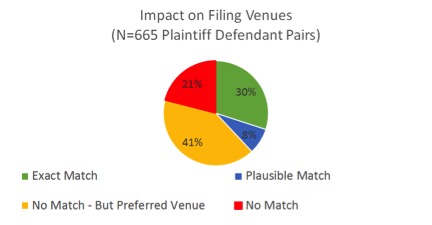 Applying codings for entity type provided by Unified Patents in Figure 2, we find that the rule change would have a greater impact on NPE plaintiffs (26% would have been able to file in the same district vs. 40% of OpCos) than OpCo plaintiffs, but that many OpCos – about 50% – would also have had to file outside of their past venues. This makes intuitive sense as plaintiffs often prefer to file in their home court, that, even if not generically plaintiff friendly, nonetheless are more convenient and represent areas where the plaintiff’s witnesses, as well as employees, are located. 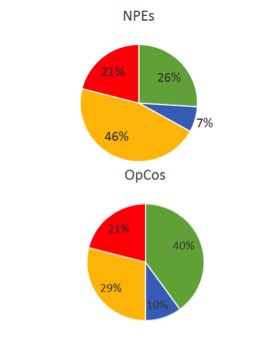 Where would the cases go? We used the steps described above to determine likely venues for all but the “no match” cases, with the results shown in Figure 3. For the reasons described above – principally that we cannot be sure where plaintiffs would sue, particularly outside of their own past patterns – the data presented here are suggestive, rather than definitive, of projected patterns. With these caveats in mind, it appears that the Delaware would be the top venue, capturing 33% of the cases, followed by the Northern District of California with 21% of cases, and the ED Tex, with 11% of the cases.

So, where does this leave us? Many cases would have to move, and not just those filed by NPEs. Even so, a decent number of cases could have stayed in the same location. That Delaware and Northern California would be the most popular is unsurprising given how many defendants are incorporated in Delaware or headquartered in Silicon Valley. Perhaps more surprising is that Eastern Texas remains third on the list, albeit with a much smaller percent of cases. These cases would likely be filed against retailers selling patented goods from stores located in that district, though there were some defendants in our sample that were headquartered there.

In conclusion, changes to venue rules would likely cause real changes to venue locations. Not all the cases would move to Delaware (as some might have expected), but a decent number likely would. Though some plaintiffs would be inconvenienced, there would be much more diversity in patent venues, with many districts seeing more cases than they have in some time, and a few districts seeing many fewer. While we leave analysis of the legal merits to others, we are literally and figuratively of two minds with respect to this outcome. On the one hand, ending the Eastern District of Texas hegemony would be a good thing. On the other hand, one of us has litigated patent cases in unpopular districts and warns that defendants should be careful what they wish for; there is a reason why so many “specialist” district court proposals have been made.

To the extent that some percentage of patent cases have been made possible solely because of favorable venue, we would expect to see dynamic effects as well, should the Federal Circuit recalibrate patent venue to its nearly century old equilibrium. If Congress doesn’t like the result, it can always act.

29 thoughts on “Guest Post: What Would Happen to Patent Cases if They Couldn’t all be Filed in Texas?”