The Patent Office routinely publishes statistics on IPR and CBM proceedings, but their methodology suggests that the petition institution rate is lower than it really is.

Inter partes review and covered business method review have undoubtedly changed patent litigation. No patent assertion campaign or defense strategy is complete without considering the implications of these AIA procedures.

The Patent Office publishes statistics on these new AIA trials roughly once a month. Practitioners can easily see how many petitions are filed in various technology areas, as well as how often claims survive or are canceled.  They say that a picture is worth a thousand words, and this visual and easy-to-read resource gives stakeholders a quick sense of how the new tribunal is affecting patent law.

But as Mark Twain once said, “[f]acts are stubborn things, but statistics are more pliable.” In publishing these statistics, the PTO has made choices in methodology that may underreport the institution rate of IPR and CBM proceedings.

For those unfamiliar with PTAB trial practice, a PTAB proceeding starts with a petitioner filing a petition for inter partes review or covered business method review.[1] See Figure 1 (below). The petition lays out reasons why a claim or set of claims is invalid.

About six months[2] after a petition is filed, the PTAB issues an Institution Decision. See 35 U.S.C. 314(b). In the Institution Decision, the PTAB decides whether or not “there is a reasonable likelihood that the petitioner would prevail with respect to at least 1 of the claims challenged in the petition.” See 35 U.S.C. 314(a).  If the PTAB decides that the petitioner is unlikely to prevail, the proceeding is terminated, and the case is disposed of.

If the PTAB determines that the petitioner may prevail, a trial is instituted.  During this stage, evidence and testimony is presented, along with additional briefing.  Within one year of institution, the PTAB issues a Final Written Decision, in which they decide whether or not claims should be canceled.  See 35 U.S.C. 316(a)(11).

The PTO has been regularly publishing statistics on a variety of aspects of AIA proceedings. One important piece of information to patent owners and petitioners alike is the average rate in which the PTAB institutes a petition for IPR or CBM, i.e., the Institution Rate. Fortunately, the Patent Office publishes exactly these figures.

Depicted in Figure 2 below is one page from the PTO’s published statistics. Their statistics depict a snapshot of every IPR petition filed as of February 29, 2016.  The PTO depicts the number of IPR petitions that have proceeded to each stage, including whether a proceeding was instituted or not, whether the case settled, and whether the instituted proceeding resulted in all instituted claims being canceled, some claims canceled, or no claims canceled. 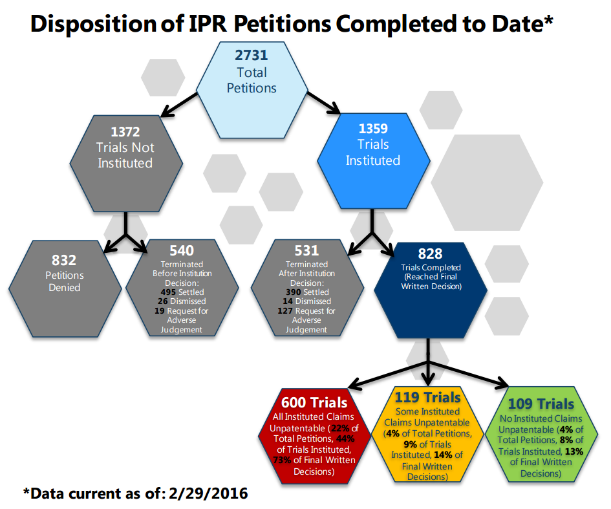 This figure is deceptively simple. The figure states that out of 2731 total petitions, 1372 trials were not instituted while 1359 petitions were instituted.  Of the non-instituted cases, 540 were terminated due to non-substantive reasons.

Therefore, of the institution decisions decided on the merits, the PTAB’s reported Petition Institution rate is 62%.[3]

When I first studied the PTO’s chart and saw that the Petition Institution rate was 62%, I was puzzled. Docket Alarm, compiles statistics like these and more, and found that petitions were instituted in 71% percent of proceedings. See Figure 3. This nearly 10-point difference was too large to be explained.

As it turns out, deriving the overall institution rate from the chart provided by the PTO can be misleading. 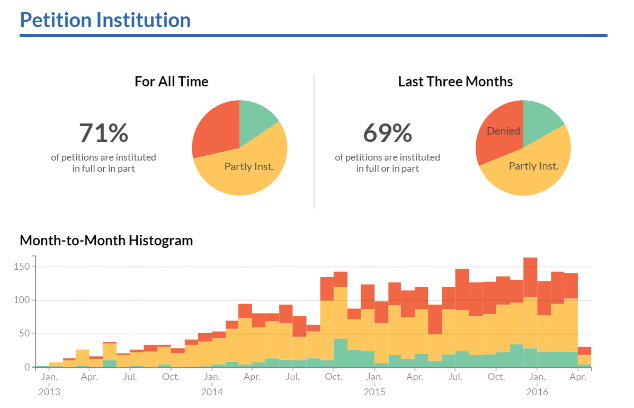 The understand why the PTO’s reported Institution Rate is lower than expected, one must understand the PTO’s methodology, and the implications of the dataset that they used.  Right at the top of the page, their figure states that only proceedings “Completed To Date” are considered in their statistics. See Figure 2.  This seemingly benign statement has profound implications on the result: If a trial is not instituted, it is included in their statistics immediately when the institution decision is published.  However, if a trial is instituted, the decision will not be included in the dataset until the case is disposed, up to a year later.  Petition denials are necessarily included at an earlier point in time than the decisions to institute.  This methodology skews the reported institution rate downward, suggesting that the PTAB is instituting far fewer trials than they are.

The effect is significant, consider the following hypothetical.  Suppose PTAB judges flip a coin to determine whether to institute: 50% of the time they decide to institute, and 50% of the time they decide to not institute.  Further suppose in our hypo that on January 1, 2013, 100 petitions are filed, and no further petitions are filed for the rest of the year.[4]

Given this hypothetical, one would assume that the reported Institution Rate should be 50%, but let’s see how it plays out.

Using the PTO’s methodology in the hypothetical above, the institution rate would be 0%. The 50 petitions that were denied are included in their statistics, while the 50 instituted decisions are not because they are not completed.

Taking the hypothetical to the following year, on Jan. 1, 2014, 100 additional petitions are filed.  Again, on July 1, 2014, 50 petitions are instituted and 50 denied. In addition, the 50 instituted petitions that were filed on Jan. 1, 2013, come to completion.  Using the PTO’s methodology, the institution rate calculated in the second year would be 25%, closer to reality but still a far cry from the “real” institution rate of 50%.

One can continue this hypothetical forward, and while the gap between the reported rate and reality narrows, after five years, the difference between what is reported and the expected institution rate is still 10%.  See Table 1 (below).

Obviously, Administrative Patent Judges do not flip a coin to decide whether to institute, more than 100 petitions are filed in a year, and petitions are not all filed on the first of the year.  However, the basic point holds true: if one only includes “completed” cases in their statistics, non-instituted cases will be over-counted, and instituted cases will be proportionally under-counted.

Because the PTO clearly states at the top of the chart that they are only including completed cases, technically, their statistics are not incorrect. However, as shown above, their methodology can lead one who is not bringing a critical eye to the statistics to believe that the Institution Rate is 10% lower than it actually is. Mark Twain would feel right at home.

[1] There are several other types of AIA trial proceedings, such as Post Grant Review and Derivation proceedings, but they are not nearly as popular as IPRs and CBMs.

[2] Six months is typical, but it can be earlier at the discretion of the court, or later if the petition is not quickly accorded a filing date.

[3] This value is calculated as:

[4] We additionally assume that no parties settle, and that petitions are afforded a filing date on the same day they are filed. These assumptions are immaterial to the substantive point, but make the numbers easier to deal with.

27 thoughts on “By The Numbers: Is the PTO Underreporting the Rate They Institute IPRs and CBMs?”