I have been waiting for the Federal Circuit’s decision in Metalcraft of Mayville (Scag Power) v. Toro.  In my patent law class last semester, we used the appeal of a preliminary injunction order as the basis for our 5th annual Patent Law Moot-Court Competition (sponsored by McKool Smith).  I want to also thank the attorneys at Boyle Fredrickson and Merchant & Gould for being good sports and providing us with documents from the case.

SCAG and TORO are competitors in the lawnmower market.  In 2016, SCAG sued TORO for infringing its U.S. Patent No. 8,186,475 that covers a vehicle (lawnmower) having an operator-platform-suspension-system. This design differs from the more traditional seat-suspension because it supports the “entire body” of the operator and helps reduce harmful shock and vibrations on users.

In the case, the district court issued a preliminary injunction against Toro to cease “making, using, selling, and offering to sell lawnmowers equipped with platform suspension systems that infringe SCAG’s patent.”  Toro appealed both the merits of the infringement case (under a proper claim construction, no infringement) and also the terms of the injunction (Failure of the injunction order to include “reasonable detail” as required by Fed. R. Civ. Pro. 65(d)).  On appeal, the Federal Circuit has affirmed, but with a slightly modified injunction. 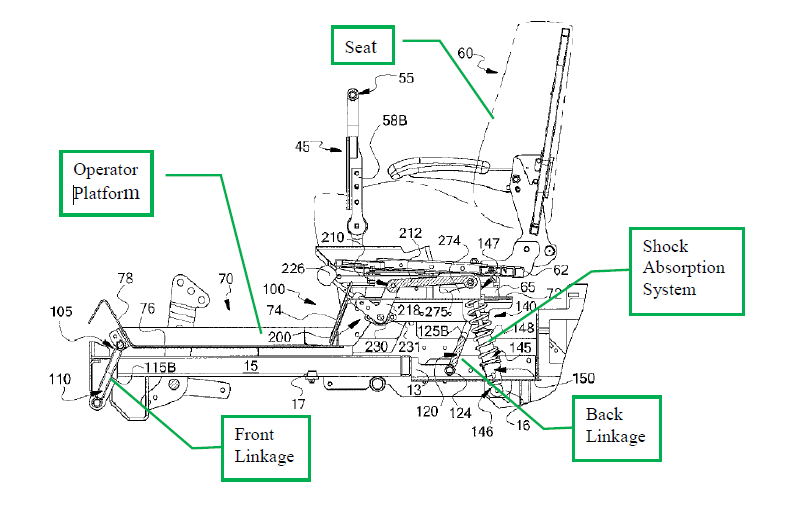 The claims require that the operator platform “support an entire body of an operator” during operation use of the vehicle.  Toro argued that users of its mowers must keep their hands on the hand-controls during operation and – since hands are part of the body – their platform does not support the “entire body.”  On appeal though, the Federal Circuit rejected that argument for narrowing claim scope.  Most importantly, the court found that the claims do not specifically require steering controls mounted to the operator platform.  Moving from there, the court attempts (but in my view fails) to adequately address the core argument:

The court here seems to suggest that the platform must directly support the entire body rather than through a component.  The problem with this argument is the seat (another component attached to the platform) actually supports most of the operator’s body.  For the claim to make any sense, the platform’s support function must pass through these attached components.

Scope of the Injunction: Fed. R. Civ. Pro. R. 65(d)(1) requires that every order granting an injunction to “state the reasons why it issued; state its terms specifically; and describe in reasonable detail—and not by referring to the complaint or other document—the act or acts restrained or required.” Here, the order stated merely that TORO must cease “making, using, selling, and offering to sell lawnmowers equipped with platform suspension systems that infringe SCAG’s patent, U.S. Patent No. 8,186,475.”  On appeal, the Federal Circuit affirmed the order, with the caveat of limiting it to the accused products. “We affirm the preliminary injunction as to the accused products.”