Guest post by Ian McCarthy and Karen Ruckman, both from the Beedie School of Business, Simon Fraser University. This is based on the research article: Why do some patents get licensed while others do not?

If the deluge of reality television shows about the subject is any indicator, the public has an ongoing fascination with both inventors and their innovations. Entrepreneurship programs like Shark Tank or Dragons’ Den offer some entertaining glimpses into how venture capitalists decide upon the kind of people and ideas they want to invest it.

But do these insights extend to the licensing of patents? Not exactly. But for those wondering why some innovations and patents get licensed while others do not, a less intuitive reality television genre might provide more compelling insights. I’m referring here to the reality dating show. If there is a truism from programs like The Bachelor or The Bachelorette, it is that match-making is a complex affair that goes well beyond choices that can be made from reviewing what we know to be true on paper. Fans of these shows—you might secretly be one yourself—note that a much richer set of variables guide the decision-making process on the part of the relationship-seeking protagonists– which often creates a greater degree of unpredictability within the plotlines and consequently a more compelling reason for viewers to watch week after week.

So how does this all relate to the licensing of technology patents? We’ll get there in a minute. But first, it’s worth restating what readers of Patently-O already know: The global licensing of patents is serious business these days. Within just the U.S., it is estimated that the annual value of licensed technologies has increased from $50 billion in 1997 to $200 billion in 2017. As a result, the financial and economic stakes for this form of matchmaking are quite high. Such technology licensing involves the transfer of intellectual property rights between two parties: the owner of the patent (i.e., the licensor), and a potential buyer (i.e., the licensee). It’s a growing opportunity for companies, and an increasingly integral business activity for companies who buy and sell patents in order to develop new innovations and products. When companies aren’t in a position to develop their own patent, perhaps due to their size or a lack of financing or expertise, they are at least able to license it out. Such a proposition offers much for both sides of such a transaction. Yet much remains unknown about the interplay between buyers and sellers in the patent licensing market.

Our study in the journal Industry and Corporate Change sought to address this gap, and answer the question: Why do some patents get licensed while others do not? By focusing on patents that are technologically similar, our analysis has provided new insights into why some patents are more likely to be licensed out. We looked at U.S. biotechnology patents that had been licensed over a period spanning 1993 to 2007, and those equivalent technology patents that were not. Historically, patent licensing has been studied by looking at primary measures of the patent itself—using measures such as patent cites and patent claims that reflect potential patent quality and value. Through a quasi-experiment methodological approach, our study looked at not only these characteristics of the patent, but also the characteristics of the licensor.

And that brings us back to those dating programs. When the Bachelorette whittles down a field of serious relationship prospects from 30 eligible bachelors down to 1, she is making choices beyond the immediate appearance-based qualities of her suitors, such as intelligence and physical attractiveness. She also observes her suitors in a multitude of social, cultural, and athletic environments; and in some cases she visits their hometowns and meets their parents and old acquaintances. In short, the choices made by the Bachelorette (or Bachelor) hinge not just on the intrinsic qualities of the suitors, but also their connections, standing and reputation. So we shouldn’t be surprised when the brother of a famous NFL quarterback is selected in the season finale over other equally-qualified but ultimately frustrated candidates (this actually happened). This shows that perceptions of quality can be garnered by association.

The academic equivalent of this might be found in a PhD student applying for faculty jobs. Two top candidates for a professor posting might hold the same qualifications—number of journal publications, quality of journals where published, research awards, and teaching prizes. With other measures equal, however, the prestige of their institutions will play a major role in the final decision. Rightly or not, organizational reputation matters—candidate qualities are insufficient to explain who gets chosen.

The same phenomenon holds true in the licensing of patents. Some licences happen to be more desirable than others—and they appeal to their prospective licensees through a combination of patent attributes and their organization’s attributes: prestige, experience, brand, and reputation (See Figure 1). When a patent is associated with a licensor of high repute or prestige, it benefits from a halo effect. A patent may be deemed to be more appealing than it really is, if it comes from a company with a strong reputation for producing outstanding technology. Conversely, a groundbreaking patent might be ignored or undervalued if it is from a lesser known licensor.

Figure 1: The allure of patent and licensor characteristics 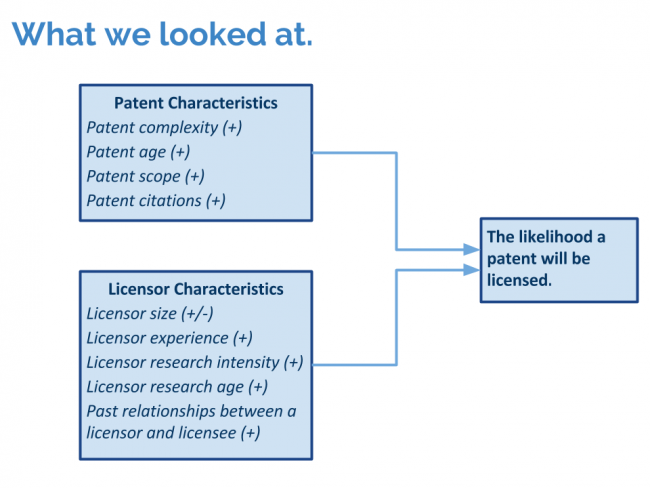 In many ways this boils down to organizational capital, or the status of the licensor. When the qualities of a patent or technology are equal, licensees will seek out other information to make a decision, such as the status of the organization selling the licence. The owners are deemed to have more experience, alongside deeper and broader knowledge capabilities. We are looking at the characteristics of the licensor in terms of what makes them attractive beyond the technology itself. It’s not just the functional quality of the patent that takes priority—the appearance and prestige of the owner also matters. Bluntly put, it’s important to look good at producing good technology.

Granted, this doesn’t always produce reasonable outcomes. A PhD graduate from second-tier university might be just as qualified as a PhD grad from an Ivey League school, after all—but we can predict who stands the best chance of getting the faculty position. Similarly, a worthy patent from a lesser-known licensor might be overlooked in favor of technological similar inventions from licensors of higher repute or standing.

Our findings provide a reminder for licensors of all patents that halo effects are important—they play a major role in framing and licensing technologies. Technological brand and reputation directly influences one’s ability to licence a patent out. Licensees look not only to the qualities of patents, but also to the profile and prestige of their owners. Licensors can’t change these variables overnight, but they should be strategically aware of them. On the flipside, some high-value patents might be ignored or undervalued because they do not have this kind of halo effect working for them.

Ultimately, the matchmaking analogy holds true across different outcomes for patents. Licensors emit reputational signals to licensees, which in turn influence a firm’s success in licensing out patents. Impressions not only matter—they are the driving force in the licensing process for otherwise equal patents.

Acknowledgements: We are grateful to Derek Moscato for his ideas and work on this posting.

95 thoughts on “Licensing matchmaking: the allure of reputation and organizational capital”