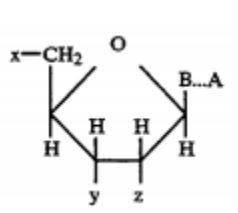 The Federal Circuit’s decision in this case begins with a statement that “this court now has considered this infringement action on three separate occasions over the course of thirteen years of litigation between these parties. We assume the parties are familiar with the background facts, and we therefore recite only those facts relevant to our decision in this appeal.” Enzo/Yale’s asserted patent claims a marked-nucleotide used in genetic research and testing.  The claimed marker is chemically stable and thus an important replacement for the prior art use of radioactive markers.  U.S. Patent No. 5,449,767.  The claims are directed to a particular chemical structure and include the following disputed language: “wherein [Structure] A comprises at least three carbon atoms and represents at least one component of a signaling moiety capable of producing a detectable signal . . . .” (See structure image above).

The problem with the analysis here is that the claims do not – on their face – specifically exclude “direct detection” but instead require that infringing structure “represent at least one component of a signaling moiety capable of producing a detectable signal.”  The exclusion of indirect detection came in Enzo II only after “using the specification to more fully understand what the patentee claimed” and considering expert testimony.  (Reminder here that the district court considered the same evidence and determined that direct detection was covered by the claims).

The Problems: In general, this case highlights the difficulties with DOE Doctrine. By definition, DOE only comes into play when the claim terms literally (expressly?) exclude the accused activity.  At that point, a court is asked to focus in on the function-way-result similarities between the claimed invention and the accused activity — a question that usually goes to a jury.  However, the courts are empowered to short-circuit the process and rule-out DOE if the claims expressly exclude the accused infringing mechanism – seemingly making DOE impossible to ever prove. Sad.

40 thoughts on “Impossibility of the Doctrine of Equivalents?”