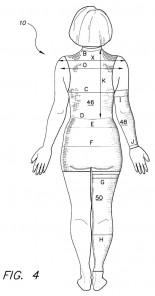 The validity of Smith’s patent turns on proper definition of the claim term “body” as used in U.S. Patent No. 6,732,817. With the basic question being: what is the “broadest reasonable interpretation” of the term “body” as used by the patentee.  In its decision here, the Federal Circuit has reversed the PTAB unpatentability conclusion (ex parte reexam) — holding that the PTO had seemingly forgotten that BRI requires a “reasonable” construction.

The patent is directed to an oil drilling tool that can collapse down to fit through a small borehole and then expand-out to fill a larger borehole.  Claim 28 shown below shows that the claim basically includes two elements, a body and an arm. The claim itself does not include any further express limitations on the Body.  Still, it is clear from the patent document that the claimed

body is something totally different from the human figure shown above-right (from a different patent).  Rather, the specification describes “a generally cylindrical tool body 510 with a flowbore 508 extending therethrough” and “one or more moveable, non-pivotable tool arms 520.”

The PTO interpreted the term in-context but still in a broad manner – finding that the term “Body” can encompass additional components such as the mandrel and cam-sleeve and noting that the specification does not actually define the term.  The Board noted that the term is generic – similar to “member” or “element” that “by itself provides no structural specificity.”  Here, in particular, the claim was directed to the entire tool, but only claimed two parts – the body and arm.  It was perfectly reasonable, according to the Board, for the examiner to interpret Body as including other unclaimed elements of the tool. This broad definition made it easy to find the claims unpatentable based upon a single prior art reference.

Looking through the specification it does appear, indeed, that the patentee did not use the “body” term as a generic “member,” but used it consistently to refer to a cylindrical tool body that was separate and distinct from the other elements of the tool.  However, one important issue that the court did not discuss is that of claim differentiation.  Pointedly, many the claims focus on particular bodies: “tubular body”; “tool body”; and “a body including a plurality of angled channels.”  The court does not consider here whether those seemingly more narrow recitations of the element should be seen as broadening the definition of the bare “body.”