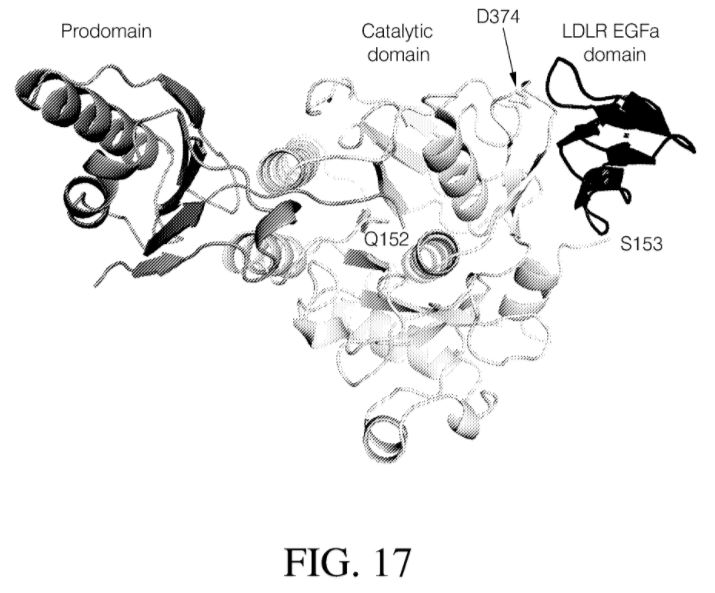 On appeal, the Federal Circuit has vacated the injunction – holding that the district court made reversible errors with regard to written description and enablement.  Before walking through the decision, I’ll note here that the Federal Circuit panel here – made up of Chief Judge Prost, Judge Taranto and Judge Hughes – would not be identified as overly pro-patentee.

The drug at issue works by inhibiting the protein PCSK9 from binding with LDL Receptor (LDL-R), thus leading to a reduction of blood LDL.  Basically, the claimed antibody binds to a particular residue (amino acid) of the PCSK9 molecule in a way that blocks the PCSK9 from then binding and promoting LDL-R. Representative claim 1 of the ‘165 patent is as follows:

wherein the monoclonal antibody blocks binding of PCSK9 to LDL-R.

Looking at the claim – it basically covers all isolated monoclonal antibodies capable of performing the required binding function – and the basic issue in the case is whether that broad claim is sufficiently supported by the specification. On point, the specification describes a number of example antibodies; the screening process that the inventors used to find those examples; and 3D structure of two of the known antibodies, including the antibody that serves as the patentee’s actual drug product (Repatha).

The Written Description and Enablement requirements are both stem from the same sentence in 35 U.S.C. 112:

The specification shall contain a written description of the invention, and of the manner and process of making and using it, in such full, clear, concise, and exact terms as to enable any person skilled in the art to which it pertains, or with which it is most nearly connected, to make and use the same.

Written description focuses on whether the original patent disclosure conveyed evidence that the patentee – at the time of filing – had “possession” of the claimed invention. Ariad.  Most written description challenges arise from post-filing amendments to the patent claim scope, however in Ariad the Federal Circuit made clear that originally-filed claims may lack sufficient written description if the claim covers a wide genus of embodiments and the specification fails to disclose “a representative number of species.”

Post-Priority Evidence: The extent of required written description disclosure depends upon the number of potential species.  However, the district court refused to allow the accused-infringer attempted to introduce such evidence unless it reflected a pre-priority understanding of the science. On appeal, the Federal Circuit rejected that approach – holding that “the use of post-priority-date evidence to show that a patent does not disclose a representative number of species of a claimed genus is proper.”  Note here, the rule here is distinct from the limitation that only pre-priority date evidence is permissible for showing state-of-the-art at filing.

Enablement also focuses on sufficiency of disclosure, but asks the slightly different question of whether, after considering the specification, a skilled practitioner would be enabled to make and use the invention.

Under the enablement requirement, “the specification of a patent must teach those skilled in the art how to make and use the full scope of the claimed invention without undue experimentation.” Genentech, Inc. v. Novo Nordisk A/S, 108 F.3d 1361 (Fed. Cir. 1997).

As with written description, the focus is on enablement at the time the application was filed, however here the court also allows post-priority-date evidence to show that the accused infringers here “engaged in lengthy and potentially undue experimentation to enable the full scope of the claims.” The court writes:

Such evidence could have been relevant to determining if the claims were enabled as of the priority date and should not have been excluded simply because it post-dated the claims’ priority date.

Thus, the district court’s exclusion of such evidence was improper.

In addition to improperly excluding evidence, the Federal Circuit also ruled that the district court antibody-antigen jury instruction relating to written description was also improper. In particular, the jury instructions included the following explanation of the law:

In the case of a claim to antibodies, the correlation between structure and function may also be satisfied by the disclosure of a newly characterized antigen by its structure, formula, chemical name, or physical properties if you find that the level of skill and knowledge in the art of antibodies at the time of filing was such that production of antibodies against such an antigen was conventional or routine.

The essential problem with the jury instruction given in this case is that it effectively permitted the jury to dispense with the required finding of a written description of the invention. . . .  A jury would naturally understand the instruction to permit it to deem any antibody within the claim adequately described merely because the antibody could easily be “produc[ed]” (and, implicitly, used as an antibody).

The decision here repudiates statement to the contrary from Enzo that are here characterized as dicta.  On remand, the jury will likely also be asked to consider whether – in this particular case – “the chemical structure of an antigen [provides] structure-identifying information about the corresponding antibodies.

85 thoughts on “Federal Circuit: Antibody-Exception to Written Description Does Not Exist”