For the past few years, I’ve been working on a project with the working title “the Federal Circuit Database Project.”  The goal of this project is to develop an accurate, reliable and transparent database containing information about the Federal Circuit’s patent law-related decisions that would be of interest to scholars, commentators and policymakers.  In keeping with the public nature of the University of Iowa College of Law, I wanted the database to be accessible and usable by anyone.

The first stage of that project, now called The Compendium of Federal Circuit Decisions, is complete.  The Compendium contains records for all documents released on the Federal Circuit’s website in an appeal arising from the USPTO or District Courts.  In practice, this means all written opinions back to late-2004 and all Rule 36 affirmances since mid-2007, along with a smorgasbord of orders and errata.  Each record contains multiple pieces of information about those documents, including whether the decision was precedential, who the authors are, whether there is a dissent or concurrence, the year of the decision, and more.  The data and its interface was structured from the ground-up in a format that would be useful for people seeking quantitative data about the court’s decisions, rather than for the purposes of traditional legal research.  The data export feature allows for all the information to be used in your favorite analytical toolset.

In order to kick off the Compendium, I wrote a short article describing the database and reporting some core descriptive statistics about the court’s decisions in appeals arising from the UPSTO and District Courts.  The draft of that article, called The Landscape of Modern Patent Appeals (forthcoming Am. U. L. Rev.) can be accessed here.  It’s still in production–the graphs, in particular, are low-resolution placeholders.

Below are graphs that might be of particular interest to readers of this blog: the types of nonprecedential decisions in appeals arising from the USPTO and District Courts.  The paper goes into more detail, but the short of it is that the frequency at which the court used Rule 36 affirmances fell substantially in 2017 (for district courts) and for both 2016 and 2017 (for the USPTO). 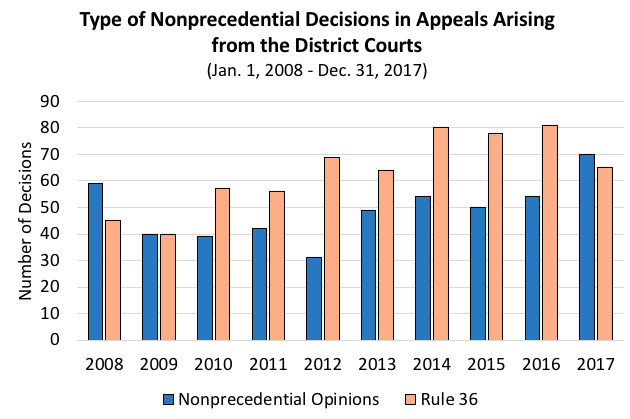 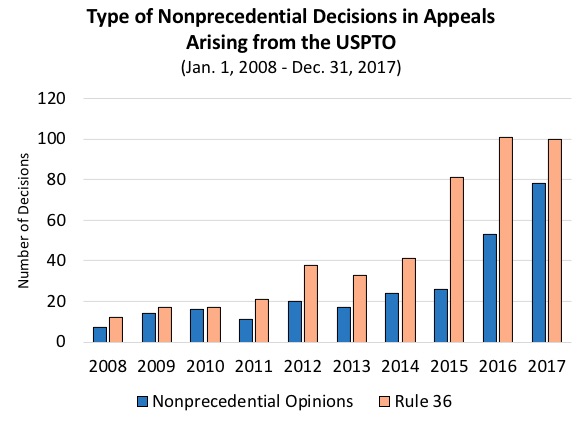 There are many more descriptive statistics and graphs in the paper, including the proportions of Federal Circuit decisions that arise from the PTAB & BPAI versus the TTAB, degree of agreement among panel members, the rate of the court’s production of precedential opinions, and even per-judge authorship data.

Although the project is now at its first milestone, there is much more to be done.  Future stages include adding new types of information to the records (such as subject-matter issues and disposition), adding documents in appeals arising from other sources, particularly the ITC, and improving the on-the-fly graphical functionality.  Comments and feedback on the project are welcome if you email me directly.

Note: In order to continue with the soft opening, and to avoid the possibility of stress-testing the Compendium, I intentionally did not include a link directly to the database in this post.  The Landscape of Modern Patent Appeals does contain the link. I’ll add it to PatentlyO in the near future.

12 thoughts on “The Landscape of Modern Patent Appeals”