In a 50+ page majority opinion, the Federal Circuit has affirmed a district court obviousness judgment.  Judge Taranto penned the majority opinion and was joined by Judge Dyk. Judge Newman wrote in dissent — arguing in 20+ additional pages that the majority improperly discounted the objective indicia of non-obviousness. On news of the invalidity decision, Acorda’s stock price dropped 25%. 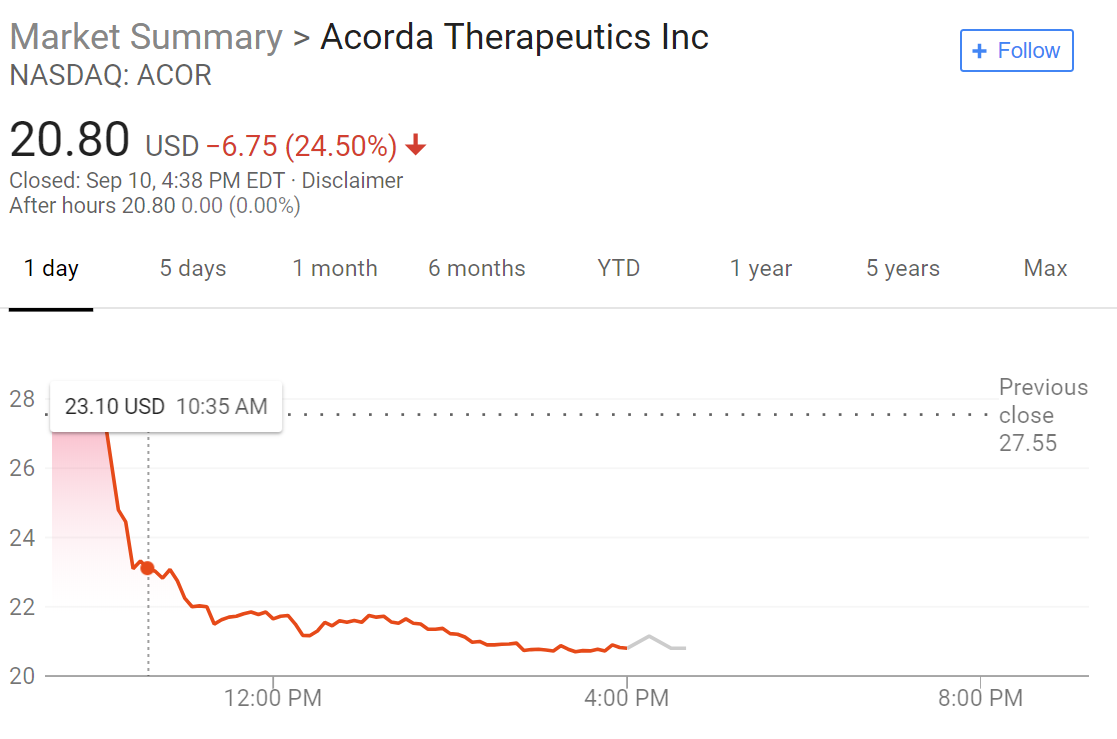 Acorda’s branded drug Ampyra is the only approved pill proven to “help improve walking [speed] in adults with multiple sclerosis (MS).”  The patents don’t cover the 4-AP drug itself — 4-AP was already publicly known — but cover particular apparently important tweaks in administration and dosage. (U.S. Patent No. 8,007,826; No. 8,663,685; No. 8,354,437; and No. 8,440,703).  Acorda also exclusively licensed an earlier patent (the Elan patent) that broadly covered use of 4-AP to treat MS (but without the tweaks).

In general, these secondary indicia must be linked to the innovation.  Thus commercial success will be discounted if due to marketing wizards rather than the invention itself.  The big deal with this decision is that the court focused on a new way to discount the proven secondary indicia.

Remember that broad Elan patent exclusively licensed by Acorda.  The majority explains that Acorda’s commercial success and the long-felt need for advances were due to the roadblock set-up by that patent. “The risk of infringement liability for marketing in the US would have provided and independent incentive [for third parties] not to develop the invention of the Acorda patents, even if those inventions were obvious.” (internal quotations eliminated; this holding, the appellate court finds was supported by the trial record).  Although the Elan patent was a US patent — and thus did not block research (FDA Research Exemption) nor did it block international sales, the majority explained that those caveats are “not shown to be weighty.” Several Amici filed briefs in support of the patentee — however, the Federal Circuit found that the friendly arguments failed for lack of proffered evidence.

Writing in dissent, Judge Newman went to the heart of  matter:

The district court observed that the objective indicia, viz. commercial success, long-felt but unmet need, failure of others, and copying, could change the result, yet discounted its weight on the theory that the patentee had a “blocking” patent.

The consequences of this new legal theory are large, as the amici curiae advise. Had the court’s approach to the law of obviousness been in effect when Acorda took up the study of 4-aminopyridine after decades of failures by others, it is questionable whether this new treatment for multiple sclerosis would have been discovered and pursued. The loser is the afflicted public.

Thus, Judge Newman would have reversed the lower court obviousness decision and reinstated the patent validity.

No doubt, the patentee will petition for writ of certiorari.  The 50+ pages of majority opinion appear designed as a mechanism for showing that the case is being decided upon complex facts — a situation less favor for Supreme Court review.  In particular, the holding does not create a per-se approach but rather simply affirms that that challenger provided evidence that was not overcome by the patentee.

I want to think through how this cuts — most new patents are directed to products or methods that are already covered by one or more prior patents.