In this appeal, the Federal Circuit has largely sided with the patentee Seoul Semiconductor — affirming the jury verdict on induced-infringement and validity.  However, the panel split on the issue of damages — with the majority finding that the damages verdict was not supported by the evidence.  In particular, the court ruled that the SSC’s expert had included non-infringing sales in her calculations.  Judge Stoll authored the majority opinion that was joined by Judge Hughes. Judge Newman wrote in dissent and would have let the jury verdict stand.

The patent at issue here claims a method of backlighting LED displays — used in lots of TVs. Back in 2012, Enplas filed for declaratory relief, but the jury sided with the patentee on all counts — finding the patents valid and infringed and awarding $4 million as a reasonable royalty for the life of the patent. (Verdict Form Below). 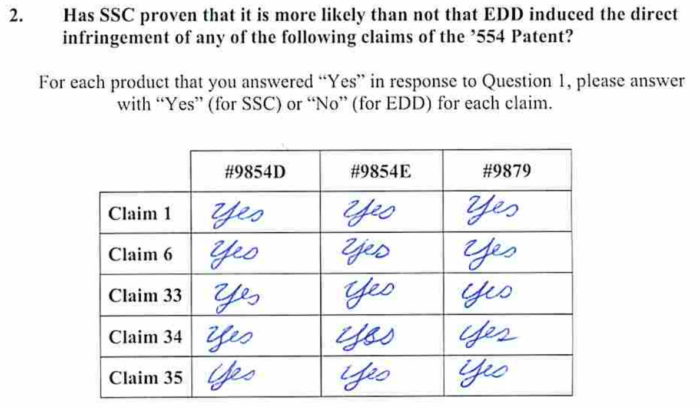 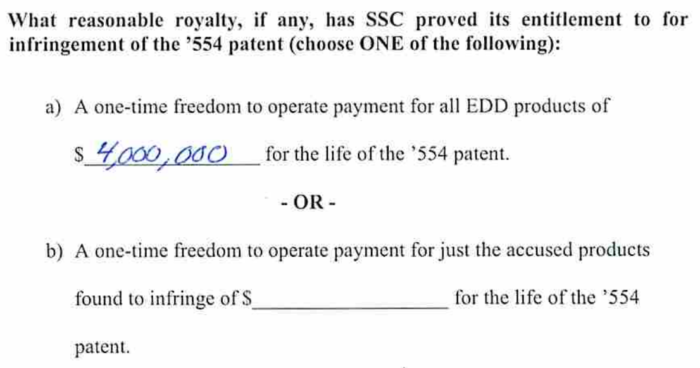 (b) Whoever actively induces infringement of a patent shall be liable as an infringer.

Unlike ordinary direct infringement, inducement requires specific intent to cause the infringement.  This requires knowledge of the patent and that the acts being induced “constitute patent infringement. Global-Tech Appliances, Inc. v. SEB S.A., 563 U.S. 754, 766 (2011). At trial, the patentee showed that the defendant knew of the patents and had been informed that its products were infringing once combined into TVs. “In addition, SSC presented evidence that Enplas provided its customers with product specifications that recommended infringing configurations for its accused lenses.”

Note here, that Enplas made lighting products that it supplied to other manufacturers – particularly TV makers.  Enplas products themselves didn’t fully practice the invention until used in a certain way by the TV manufacturers.  In the appeal, Enplas argued that it didn’t “know” that its lenses would be used in the infringing way.

As an issue of law, the Federal Circuit agreed with the accused infringer that “mere knowledge of possible infringement is not enough” for a finding of inducement.  However, in this case, the circumstantial evidence was enough for the jury to find knowledge of infringing use by customers and intent to induce that infringement.

The Federal Circuit called this a “close case.” Truthfully though, but it doesn’t appear close in the way described by the court since the infringer (1) had knowledge of the patents and (2) was directly informed that customers using its instructions would be infringing.

Damages: The damages case here was similar to a convoyed damages situation.  The patentee’s expert testified that the reasonable royalty for the accused lenses would have been $500,000.  However, the expert testified more “pragmatic license” negotiations would be for a broader freedom-to-operate license that would include additional similar (i.e. non-infringing) products as well as future developed infringing products.  That broader license would go for $4,000,000.

On appeal, the Federal Circuit rejected this approach to calculating damages because it goes beyond compensation for the infringement.

Here, SSC’s expert opined that Enplas and SSC would have agreed to a $2 to 4 million royalty based on a royalty base comprising sales of non-accused lenses. This testimony cannot support the jury’s damages award, for § 284 and our precedent proscribe awarding damages for non-infringing activity. Thus, the jury’s $4 million award for infringement of the ’554 patent cannot stand. . .

According to SSC, because its expert  characterized her use of the volume of sales of nonaccused lenses as a “paid-up, lump sum royalty” to ease an “administrative burden,” her application of a royalty to non-accused lenses was acceptable. We disagree. Regardless of the characterization by SSC’s expert, damages calculated by applying a royalty to sales of non-accused lenses cannot support a jury’s verdict on damages. To be sure, we have held that a jury may award a lump-sum, paid-in-full royalty in lieu of a running royalty on future sales. See Lucent. But that lump-sum must be based on an estimate of the extent of future sales of accused products, not on past sales of non-accused products.

The result here is that on remand the damages are likely cut down to $500,000 instead of $4 million.

Writing in dissent, Judge Newman suggests that the statute only sets a floor for damages — not a ceiling.

Neither side argues that the jury’s damages award was not adequate to compensate for the infringement. No argument is presented that the jury awarded less than a reasonable royalty for the use made of the invention. Nonetheless, Enplas argues on appeal that an improper theory was presented by SSC’s damages expert and, thus, the jury verdict is fatally flawed. Enplas is mistaken, in law and in reality, as well as in contravention of standard litigation procedures. . . .  The lump-sum reflects a reasonable royalty that the infringer would have been willing to pay on hypothetical negotiation under the circumstances that existed.

Judge Newman suggests here that if the patentee’s expert testimony was flawed then it should have been either challenged under FRE 702 (Daubert) or exposed on cross-examination or via counter-presentation of evidence.   The infringer did not raise any appeal on those issues.