For the past several years, I have been conducting an annual patent law moot court competition at Mizzou. This year – the eighth annual – the case was was captioned as an appeal of a recent dismissal by District Court Judge Indira Talwani in Cardionet, LLC v. Infobionic, Inc., 2018 U.S. Dist. LEXIS 177305, 2018 WL 5017913 (D. Mass October 16, 2018).  In her decision, Judge Talwani dismissed the case for failure to state a claim — ruling CardioNet’s heart monitor patent is directed to an abstract idea rather than a patent eligible invention. U.S. Patent Number 7,941,207 (“the ‘207 patent”).  The moot court is sponsored by McKool Smith and so the winner receives $1,000. 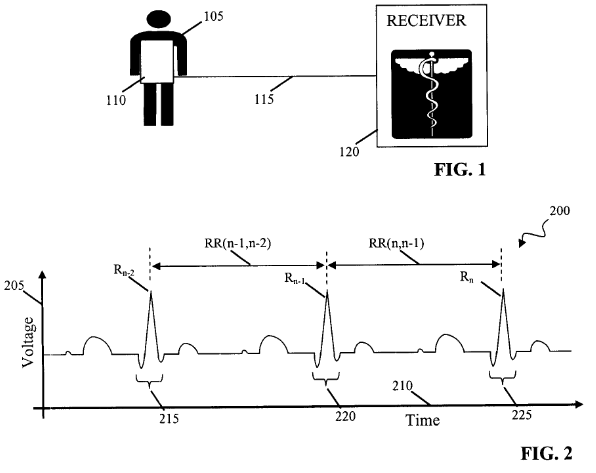 In the mock appeal, the patentee raises two issues:

The patent here covers a device for diagnosing and monitoring heart arrhythmia — particularly atrial fibrillation and atrial flutter.  The basic setup uses standard portable-heart-monitor equipment to get ECG signals.  With those signals, the patentee measures variability in beat-to-beat timing of the heart and also ventricular-beat timing.  Those two measures can be used then to diagnose a-fib while ruling out other arrhythmia. Claim 1:

a beat detector to identify a beat-to-beat timing of cardiac activity;

variability determination logic to determine a variability in the beat-to-beat timing of a collection of beats;

relevance determination logic to identify a relevance of the variability in the beat-to-beat timing to at least one of atrial fibrillation and atrial flutter; and

3. The device of claim 1, wherein the variability determination logic is to compare times between R-waves in three successive QRS complexes to determine the variability in the beat-to-beat timing.

CardioNet sued InfoBionic for infringement in March 2017. Rather than filing an answer, InfoBionic filed a Motion to Dismiss for “failure to meet the pleading standard of Twombly and Iqbal and for patent ineligibility of the ‘207 patent pursuant to § 101.” While the district court was considering the briefed motion, the Federal Circuit decided Aatrix and Berkheimer but did not permit supplemental briefing regarding material facts at issue in the case. The district court then granted the motion to dismiss with prejudice – finding the claims invalid as directed to an abstract idea. The court explained “the innovation of the … patent may be to use  computer equipment and logic to monitor the variability of beats, but nothing in these claims places any limitation on that abstract idea.”

I still struggle with failure-to-state-a-claim motions in this particular situation because it confounds the ordinary approach to procedure in federal civil litigation. Namely, in ordinary litigation, the complaint does not need to anticipate defenses (such as invalidity) and plead facts to get around those defenses.  Rather, the complaint is where the patentee makes its prima facie case of infringement.  That said, the courts are disagreeing, at least de facto.

Question: How would you argue this appeal?

CardioNet has filed its notice of appeal, but briefing is not due in the actual case until January 2019.

155 thoughts on “Is this Heart Monitor Merely an Abstract Idea?”