Artist Christopher Boffoli is known for his detailed photographs contrasting small people with large food. In 2015, Atemis LLC allegedly posted a couple of images of Boffoli works on Facebook and mis-attributed the works to other artists in the same small-people-large-food genre.  Atemis has a food-ordering app called “Let Eat Go” and the FB posts were in conjunction a FB page for the app. 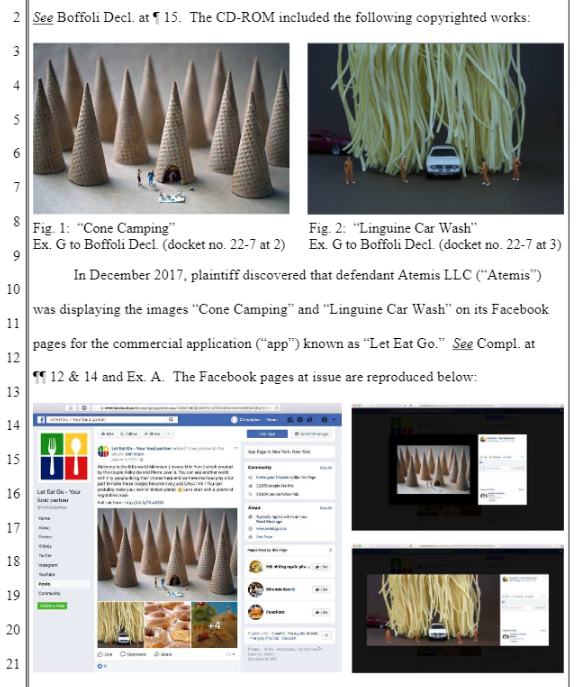 Atemis did not show up to court and so the clerk awarded default under FRCP 55(a).

Entering a Default. When a party against whom a judgment for affirmative relief is sought has failed to plead or otherwise defend, and that failure is shown by affidavit or otherwise, the clerk must enter the party’s default.

When the complaint asks for a “sum certain,” then the court clerk will simply enter that amount as the default judgment. R. 55(b)(1).  Here, the plaintiff asked for $150,000 as a statutory damages for willful infringement.  However, the district court implicitly ruled that 55(b)(1) doesn’t apply — perhaps since the copyright act expressly puts the calculation of statutory damages in the hands of the judge.

Here, the court first ruled that the evidence submitted in its motion for default judgment was not sufficient to prove willful infringement.  The court then found that $15,000 was the “just” amount.

Boffoli has been a frequent copyright litigant — having filed more than a dozen additional infringement suits over the past decade.