This appeal combines twelve different inter partes review (IPR) proceedings. In each case, the PTAB Board sided with the patentee — holding that the claims of Lilly’s U.S. Patent 7,772,209 were not proven invalid.  On appeal, the Federal Circuit has affirmed.

Premetrexed disodium is a drug treatment for malignant mesothelioma that works as a folate antagonist — blocking cell usage of folic acid necessary for rapid DNA replication.  The drug has major side effects addressed by the Lilly patent.  In particular, the claimed invention calls for a pre-treatment of a patient with folic acid and vitamin B12 in order to reduce the risk skin rashes, fatigue, etc. 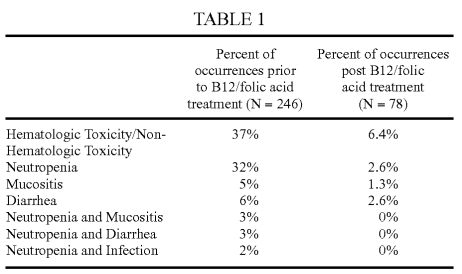 The patent itself calls the idea here “surprising[] and unexpected[]” — since the pre-treatment with folic acid does not appear to reduce the therapeutic efficacy of the premetrexed disodium whose intent is to reduce folate availability.

The prior art already taught pre-treatment with folic acid, but not the combination with vitamin B12. The PTAB found the addition of vitamin B12 a non-obvious step — especially when considered in light of the FDA’s express skepticism of the treatment approach.

The challengers here focused on an obvious-to-try argument — pointing out that some of the side-effects of premetrexed disodium suggest vitamin-B12 deficiency.  On appeal, however, the Federal Circuit explained that other side-effects pointed away from a vitamin-B12 deficiency. Thus, according to the court, the PTAB’s conclusions of nonobviousness were supported by substantial evidence.

Post-Invention Statements to the FDA: In its application for a new drug treatment, Lilly explained to the FDA that the prior art “suggested that pretreating with folic acid and B12 was a no-risk, predictable way to lower pemetrexed-induced fatalities by lowering pretreatment homocysteine levels.”  This statement suggests strongly that the invention was obvious.  However, the Court rejected the post-invention statement by Lilly as “made through the lens of what they had invented” and therefore not actually indicative of the pre-invention prior art.

Patent Eligibility: Patent Eligibility cannot be challenged in IPR proceedings. Still, on appeal the patent challengers argued that the claims here are so far beyond the pale of eligibility that the court should simply reject the claims as a matter of law.  When questioned regarding appellate jurisdiction, the challengers cited the Administrative Procedures Act requirement that “a reviewing court shall decide all relevant questions of law. . . . This Court’s review is not limited to the grounds considered by the Board (either implicitly or explicitly) where the question is one of law. See In re Aoyama, 656 F.3d 1293, 1299 (Fed. Cir. 2011) (holding that this Court could reach indefiniteness for the first time on appeal since it is a question of law).”

On appeal here, however, the Federal Circuit refused the chance to opine on eligibility — holding that IPR proceedings are limited only to obviousness and anticipation, and appeals are likewise limited.

21 thoughts on “Eligibility Cannot be Raised in IPR Appeal”