The Federal Circuit has ordered dismissal of On Semiconductor’s IPR petitions against several patents owned by Power Integrations.  The basic issue on appeal was interpretation of the time-bar under 35 U.S.C. 315(b)

(b) An inter partes review may not be instituted if the petition requesting the proceeding is filed more than 1 year after the date on which the petitioner, real party in interest, or privy of the petitioner is served with a complaint alleging infringement of the patent.

The statute here is clearly drafted, with the basic ambiguity questions being (1) what counts as a “real party in interest or privy of the petitioner” and (2) whether “served with a complaint” requires a summons under FRCP R. 4 – and what if service is waived?  This case focuses on a third question — (3) real party in interest as of when?

Back in 2009, Power Integrations sued Fairchild Semiconductor for infringing the patents at issue and has won two separate $100+ million jury verdicts (both of which have been rejected).  A third trial on damages is now likely for later this year (since the patent claims are no longer cancelled). 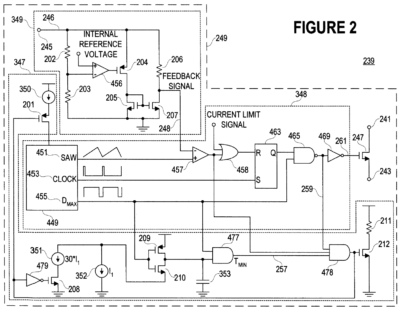 In 2015, ON (petitioner here) agreed to purchase Fairchild (in a confidential agreement). Prior to completion of the acquisition, ON filed the IPR petitions. On September 19, 2016, ON Semiconductor completed the acquisition.  Then, later that week, September 23, 2016, the USPTO issued its institution decision and ultimately held the challenged claims unpatentable as obvious. [Final Written Decision]

Throughout the institution phase, the patentee challenged institution on time-bar grounds — arguing that Fairchild was served with a complaint more than one-year before the IPR petition filing; and that Fairchild is a Privy of petitioner ON.  Q.E.D.

The Board, however, sided with petitioner holding (1) the focal point is the status of the parties at the time the petition was filed (thus the subsequent merger does not deny institution); and (2) that “there was insufficient evidence of record to establish control and therefore insufficient evidence to establish privity between Fairchild and ON at the time the petition was filed.”  The Board also denied additional discovery into the admittedly confidential relationship.

On appeal, the Federal Circuit has reversed that decision holding that privy relationships developed post-petition but pre-institution should be considered. Thus, the merger (clearly creating privity and Real Party in Interest (RPI)) pre-institution with a time-barred company prevents the IPR from being instituted.   For its decision, the court looked particularly to the language of the statute which focuses on institution – “may not be instituted if . . . ”

The Board’s decision under § 315(b) is whether to institute or not. The condition precedent for this decision is whether a time-barred party (a party that has been served with a complaint alleging infringement of the patent more than one year before the IPR was filed) is the petitioner, real party in interest, or privy of the petitioner. In other words, the statute specifically precludes institution, not filing.
When the Board finds that an IPR is barred under § 315(b), it denies institution. It does not reject the petitioner’s filing. The focus of § 315(b) is on institution. The language of the statute, in our view, makes privity and RPI relationships that may arise after filing but before institution relevant to the § 315(b) time-bar analysis. . . .

Result here is that the claims are no longer cancelled – and so the new trial on damages against Fairchild should move forward (barring a settlement).

*** Save this for another day: the case includes important and interesting discussions of issue preclusion and agency deference.