In a non-precedential decision, the Federal Circuit has affirmed the district court’s holding that Grecia’s asserted claims invalid as indefinite.  The claims include a means-plus-function limitation, but an example of the underlying mechanism was not disclosed in the specification.

In the years leading up to the Patent Act of 1952, several courts (including the U.S. Supreme Court) severely limited the ability of applicants to use functional claim limitations (rather than structural) in order to obtain broader patent protection.  See, for example, Halliburton Co. v. Walker, 329 U.S. 1 (1946) (barring functional limitations at the point of novelty). Traditionally, patent attorneys had drafted these functional limits in “means-plus-function” language.  In Halliburton, for instance, Walker’s invalidated claim required “means … for creating pressure waves of known frequency.”

Section 112 ¶ 6.  Although this provision left patentees in a much better position than under Halliburton, most patent drafters attempt to avoid having claims fall under its ambit — preferring instead to rely upon quasi-functional limits that include some amount of structure and some amount of function and that do not use the magical words “means for.”  That approach is preferred because, under the statute true means-plus claims are construed narrowly — to cover only the “corresponding structure” that was actually described in the specification (“and equivalents thereof”).  In addition, as this case reiterates, a means-plus claim will be deemed invalid as indefinite if the specification does not actually disclose a corresponding structure.

It used to be much easier for attorneys to slip through the eye of the needle — but in recent years the gap has tightened as the Federal Circuit ruled that “nonce words” should not be seen as structural. (Is the eye too small, or the camel too large?)

Here, the patent claims a “customization module” that the district and appellate court found to be equivalent to a “means for customization.”  In Williamson v. Citrix, the Federal Circuit previously explained that “‘Module’ is a well-known nonce word that can operate as a substitute for ‘means.'”

After finding “customization module” to invoke 112 ¶ 6, the court then found that the specification did not provide any specific disclosure of how such a module would actually work.  Grecia’s patent is focused on computer implemented technology. In that context, the court has repeatedly held that disclosure of the associated computer algorithm can be sufficient (and is often required). Here, however, the specification did not include such an algorithm:

Notes: The patent does discuss the “customization module” a few times and includes an image (below), but it is all very mushy.

According to an embodiment of the present invention, the customization module 206 facilitates adding one or more of a banner, a logo, an image, an advertisement, a tag line, a header message and textual information to the user access panel of the encrypted digital media. 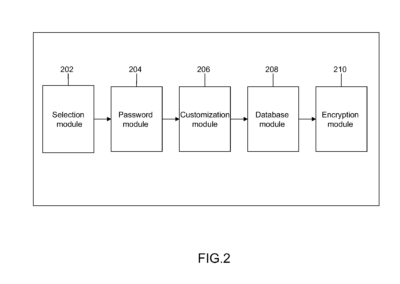 107 thoughts on ““Customization Module” is a Means-Plus-Function Element; Indefinite Without Disclosed Algorithm”