U.S. Patent No. 7,224,275 in particular claims a garage door opener that includes a status-condition-data-transmitter to know if the door is open or closed without looking.  The jury found that Techtronic willifully infringed and the patent not invalid.  The district court then awarded enhanced damages, attorney fees, and injunctive relief.

On appeal , the Federal Circuit has overturned the verdict — holding that the claims are invalid as directed toward the abstract idea of “wirelessly communicating status information about a system.” Alice Step 1. Further, the claims do not include any inventive concept under Alice Step 2. All of the physical elements in the claim were admittedly “well understood in the art” and claimed in a generic fashion.  The only arguably new element is that the actual information being transmitted is “a status condition signal that: corresponds to a present operational status condition (open or closed).

a controller having a plurality of potential operational status conditions …;

a movable barrier interface operably coupled to the controller;

For its part, the N.D. Ill district court (Judge Leinenweber) had concluded that the claims are directed to “garage door openers that wirelessly transmit data . . . us[ing] a particular manner of sending and experiencing data.” 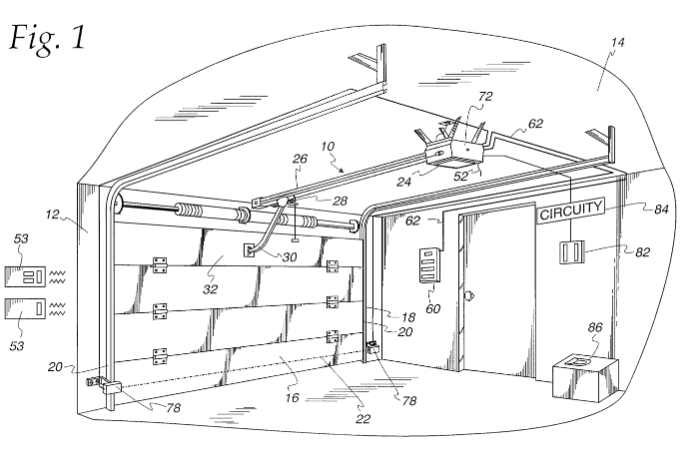 In reviewing the case, the Federal Circuit placed the invention here within the context of the art — finding that the “only described difference between the prior art movable barrier operator systems and the claimed movable barrier operator system is that the status information about the system is communicated wirelessly, in order to overcome certain undesirable disadvantages of systems using physical signal paths—additional cost, exposed wiring, and increased installation time.”  From that framework, the court easily found the claim directed to an abstract idea.

On Alice Step 2, Chamberlain argued an inventive step — since it proposed a new garage door opener “that includes an integrated controller and a wireless transmitter to transmit a status signal.”  Nothing of record in the case provided evidence that such a setup was “well-understood, routine and conventional to a skilled artisan.”  On appeal, the Federal Circuit rejected this approach finding that the patentee “misunderstands our case law.”

The appropriate question is not whether the entire claim as a whole was “well-understood, routine [and] conventional” to a skilled artisan (i.e., whether it lacks novelty), but rather, there are two distinct questions: (1) whether each of “the [elements] in the claimed [product] (apart from the natural laws themselves) involve well-understood, routine, conventional activity previously engaged in by researchers in the field,” and (2) whether all of the steps “as an ordered combination add[] nothing to the laws of nature that is not already present when the steps are considered separately” Mayo. In other words, beyond the idea of wirelessly communicating status information about a movable barrier operator, what elements in the claim may be regarded as the “inventive concept”?

Here, the court found that once the abstract idea was removed, nothing in the claim remained except for conventional and well known elements.

The lawsuit also included a second Chamberlain patent that that the jury had also found infringed and not anticipated.  U.S. patent No. 7,635,966.  The second patent was directed to a garage door opener that includes a rechargeable battery backup for use if the normal power supply is temporarily unavailable. On appeal, the Federal Circuit affirmed the no-anticipation jury verdict — holding that the single prior art reference was “less than clear” and thus the jury had room to make its factual determination.

On remand, the district court will need to re-do its remedies analysis, including enhanced damages, attorney fees, and injunctive relief now that only one of the patents is infringed.

Improper Venue. Venue was apparently improper under TC Heartland. However, that decision was released only three months before trial.  The defendant requested a transfer of venue within 30 days of the Supreme Court decision.  However, that request was denied. On appeal, the Federal Circuit affirmed — holding that 28 USC 1406(b) provides the court with authority to reject venue transfer requests that are not “interpose[d] timely.”  The court writes:

Here, a 30 day delay isn’t bad at all — except in the context of upcoming trial.

Final note on the case and evidence. The defendant had petitioned the PTAB for inter partes review of the ‘966 patent. The PTAB however, denied institution.  The district court allowed that denial to be admitted as evidence.  However, the judge gave a limiting instruction to the jury — that the legal standards may differ.  On appeal, the Federal Circuit found no abuse of discretion.