The Kansas jury sided with Sprint — finding all five patents infringed and not invalid and awarding a $140 million reasonable royalty verdict. 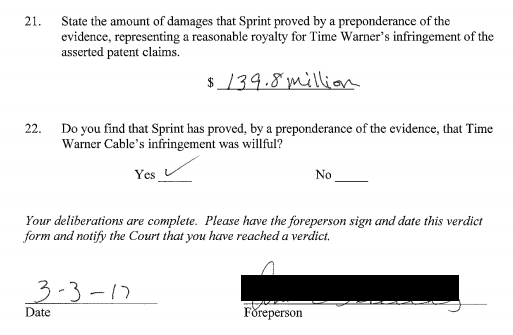 On appeal, the Federal Circuit affirmed judgment – albeit in a 2-1 split.  Time Warner has now petitioned the Supreme Court on two questions of patent law: damage apportionment; and written description requirement.

In its petition, Sprint explains the basis for damages — that they should be calculated as adequate to compensate for the infringement” — no more and no less.

Apportionment: For over 150 years, courts have struggled with the apportionment issue for improvement or component patents.  The question is how to ensure that full damages are awarded for infringement of the patent; but simultaneously avoiding an award of damages for non-patented features.  In its 1884 decision, the Supreme Court wrote that patentee “must in every case give evidence tending to separate or apportion the defendant’s profits and the patentee’s damages between the patented feature and the unpatented feature.” Garretson v. Clark, 111 U.S. 120 (1884), quoting Garretson v. Clark, 10 F. Cas. 40, 44 (C.C.N.D.N.Y. 1878).  In its opinion, the Federal Circuit concluded that apportionment is implicitly achieved by applying the Georgia-Pacific factors “under proper instructions.”  The petitioner here calls BS on that implicit approach.

Written Description: The patent here claims voice communication via “packet communication” that is clearly broad enough to encompass the accused Voice-over-Internet-Protocol (VoIP) systems.  However, the patent specification does not disclose or discuss VoIP, but rather asynchronous transfer mode (ATM).  ATM uses packets, but mimics legacy circuit-switching by establishing a virtual circuit (something not done by an IP system). As IP has proven itself capable and less expensive, it is largely replacing the ATM approach.  The petition here argues that the breadth of claims are not supported by the written description.

In its opinion, the majority sided with the patentee — noting that that IP technology “is not expressly excluded” by the specification and that the document refers to ATM as one possible “broadband system.”  The “such as” language “strongly suggests that the patents are not limited to ATM technology.”  Here, the court also concluded that a lightweight disclosure was acceptable since IP systems were known in the art as a form of broadband.

Judge Mayer wrote in dissent. He concluded that VoIP should not be understood as within the disclosure since the specification repeatedly focused on ATM style virtual circuits with no disclosure of other packet networks. “[T]he specification’s disclosure makes sense only in the context of ATM technology.”

37 thoughts on “Damages for Improvement Patents: Are the Georgia-Pacific factors sufficient?”