This is the second appellate decision this month involving these two parties and Gamon’s  patented rack for displaying and dispensing cans. As in Campbell Soup I, this decision stems from an IPR challenge filed by Campbell Soup against a Gamon patent. The difference – while Campbell Soup I involved design patents; Campbell Soup II focuses on the related utility patent. 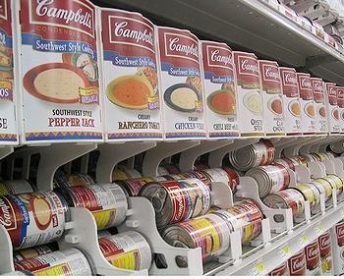 These patents are all part of a big patent family that started with a 2002 provisional application followed by a non-provisional in 2003, then the utility patent at issue here (US Patent 8,827,111), followed later by the design patents at issue in Campbell Soup I. The design patents do not appear to claim priority to the provisional (since that is not allowed under the law).

In the utility case, the PTAB partially instituted Campbell’s requested IPR but declined to institute as to some of the claims and some of the grounds.  Under SAS, that partial institution was improper and thus the case is remanded “to address the non-instituted claims and grounds in Campbell’s petition.”  SAS Institute, Inc. v. Iancu, 138 S.Ct. 1348 (2018) (all claims challenged) as expanded by Adidas AG v. Nike, Inc., 894 F.3d 1256 (Fed. Cir. 2018) (all grounds challenged).  As discussed below, the court also addressed the PTAB’s holding in favor of the patentee as to the instituted claims (particularly claim 27). 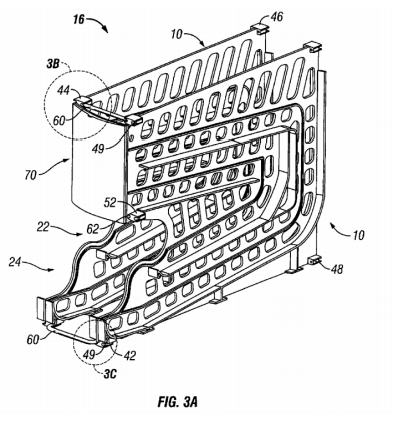 The claimed dispenser has a few interesting features — the most important is that its design that allows a customer to replace a can that had been removed. The basic approach is to have two chutes of cans that snake their way down the structure.  At the bottom, the lower chute and upper chute each have a flange to stop cans from rolling off, with the upper stopper offset rearwardly to leave a space for replacing a can. “This feature allows the customer to replace a product that they decide not to purchase.”  The prior art had two-chutes with an offset upper chute, but apparently was not offset enough to create a stable pocket for replacement.  (Prior art shown in drawing below) 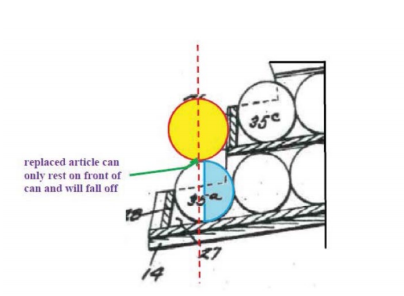 Campbell noted that the replacement feature would work if someone used smaller cans — noting the prior art statement that “[o]bviously, the device may be made … in any desired size to accommodate varying sizes of cans to facilitate the dispensing thereof.”  Note Campbell’s argument:

The dispenser claimed in Weichselbaum—without any modification to the structure of the device—is capable of the functionality described in limitation [9] when Weichselbaum is used with cans smaller than those shown for illustrative purposes in its figures.

On appeal, the Federal Circuit sided with the patentee — holding that the cans are part of the prior art design.  Thus, “changing the [relative] size of the cans . . . is a modification” of the prior art reference. In referencing the “obviously” quote from the patent (recited above), the Federal Circuit held that the statement could be interpreted as indicating a change in can size could be accommodated by a change in dispenser size.   Thus, “substantial evidence” supported the PTAB’s findings regarding the differences between the prior art and the claimed invention that served as a foundational fact for the PTAB’s obviousness conclusion.

As a separate reason for affirmance, the Federal Circuit concluded that the patentee’s objective indicia of nonobviousness are “sufficient to affirm” the not-proven-invalid conclusion.  The Federal Circuit did not review these findings in particular, but the PTAB held particularly:

Note here that the commercial success element is a bit interesting and unusual.  The “success” identified by the PTAB is not that the patented device is a huge commercial success, but instead that it led to more sales of cans — i.e., it worked well for its purpose.

Design Patent Obviousness: How to Pick a Primary Reference