By Sarah Burstein, Professor of Law at the University of Oklahoma College of Law

Gamon Plus has filed a petition for rehearing in its design patent dispute against Campbell (previous Patently-O coverage of the case by Professor Crouch here).

Like the majority and the dissent in the panel decision, the petition does not directly address the main difficulty raised by this case—namely, how should we apply the design patent “primary reference” test for multi-article designs?

According to Gamon Plus, its two patents claim “designs of displays developed by Appellee Gamon Plus specifically for the display of Campbell Soup cans in stores.” Here are the illustrations Gamon Plus included in its petition for rehearing: 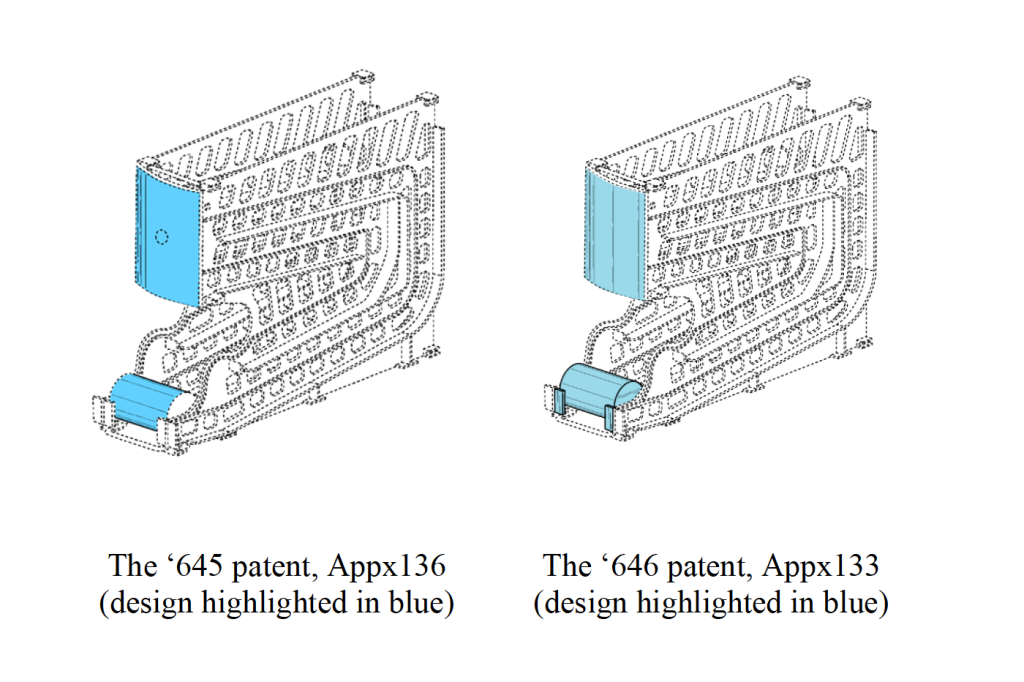 However these claims are interpreted (a matter of much dispute in this case), they are each clearly directed to what we might call a “multi-article” design. Each design defines parts of the shapes of separate articles—a dispenser and a can.

The problem is that the design patent “primary reference” requirement was created in the context of—and implicitly assumes—a single-article design. The lesson in Durling and Rosen was that you can’t create a Franken-article to serve as a primary reference. If the patent (or application) claims a design for a table, you can’t splice parts of different tables together to form a single, hypothetical table. You have to find a table that actually exists (or a sufficient description thereof) in the prior art.

But what happens when the design extends over separate articles? Gamon Plus (and Judge Newman, in dissent) seem to argue that there must be a single reference that explicitly discloses both articles being used together in the same way. That can’t possibly be right—especially on the facts of this case.

Gamon Plus conceptualizes its design as a “display” with a label and a can with “specific dimensions” is placed “at a specified relative location spaced below the [dispenser] label.” But Gamon Plus didn’t invent that can shape. To the contrary, as quoted above, Gamon Plus says the dispenser was designed specifically for Campbell’s Soup cans.

The only shape that Gamon Plus invented was the shape of the dispenser. That shape may be defined by and adapted to the shape of the can. And it may be meant to display that can in a particular position. But a patentee should not be able to effectively immunize a design for one article from § 103 scrutiny merely by claiming the “design” is really the use of that article with some other (unoriginal) article.

Side note: As someone who’s studied design patent nonobviousness for a long time, the thing I found most surprising thing about this decision was that the majority thought Linz looked similar enough to be a primary reference—hypothetical can or no hypothetical can. In recent cases, it’s been hard to see much blue sky between “basically the same” (the primary reference standard) and “the same” (the anticipation standard), at least as the former is applied by the Federal Circuit. For more on some of these cases, and design patent nonobviousness more generally, see this article and this post. If Campbell signals a shift away from that overly strict application of the test, that would be a welcome development.

9 thoughts on “Guest Post: The real puzzle in Campbell Soup v. Gamon Plus”