Three commenters to John Welch’s TTABlog were recently sued for defamation after criticising an attorney Lee Thomason who lost a case before the TTAB. I know both John and Lee (who recently retired as a clinical professor at OSU) which makes this a bit more interesting and unfortunate.  Prof. Eugene Volokh has written more about the new lawsuit on his blog Volokh Conspiracy.

To be clear, the TTAB case was not simply lost on the merits. Rather, the TTAB issued a precedential decision cancelling Corcamore’s SPROUT registration as a sanction for bad behavior:

Respondent has been engaging for years in delaying tactics, including the willful disregard of Board orders, taxing Board resources and frustrating Petitioner’s prosecution of this case. In view thereof, Petitioner’s motion for sanctions in the form of judgment against Respondent also is granted pursuant to the Board’s inherent authority to sanction.

SFM v. Corcamore (TTAB 2018). Thomason represented Corcamore but was not personally sanctioned by the Board.

In his post, Welch did not identify Thomason by name but did make the comment: “What about a sanction against counsel?”

Three folks (all trademark attorneys) then added comments noting: (1) the attorney Thomason was a professor at The Ohio State; (2) the board “certainly ought to sanction” such behavior; (3) that the attorney is likely to blame because this is a procedure issue; and (4) that the attorney has been previously called out for unprofessional conduct. 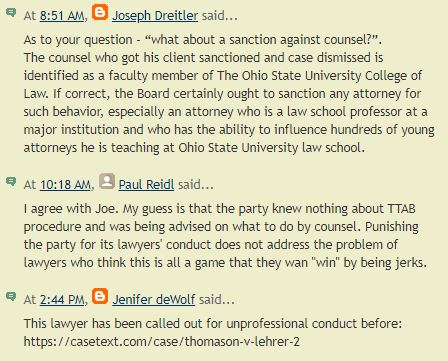 The new defamation lawsuit filed in Federal Court in Kentucky accused Dreitler, Reidl, and deWolf of “volitional contacts with readers in Kentucky of the defamatory comments.” Prof. Volokh, whose expertise is defamation (inter alia), reviewed the filing and suggests that the claim will not stand, but promises an attempt to keep readers updated.

26 thoughts on “Take care Patently-O Commenters — Lawsuits are in the Air. ”