In this case, the PTO refused to grant Charles Fote’s patent covering a Broker-Mediated Payment System after concluding that the claims lacked eligibility.  On appeal, Fote argued otherwise — especially considering the PTO’s new (limited) approach to eligibility examination.  The Federal Circuit though refused to bite and simply affirmed the PTO determination without issuing any opinion under its internal R. 36. 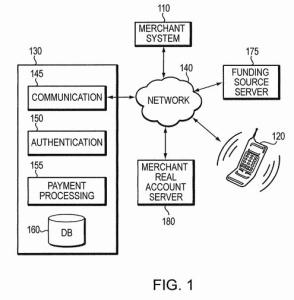 In a recent request for extension of time, Fote has indicated his plans to ask the Supreme Court to review the propriety of the Federal Circuit’s no-opinion judgments:

The petition for certiorari will contend that in cases like this one, where the administrative agency arguably erred in its analysis of the proposed patent claims and failed to properly apply the law, the use of one-word summary affirmances under Federal Circuit Rule 36, which effectively prevents review of the merits of the panel decision en banc or by this Court, is impermissible.

[Fote petition to Supreme Court for extension of time]  Although the patent application appears to be unpublished, the file-history was included in the Federal Circuit briefing. [JointAppx].

Representative claim 8 is directed to a “telecommunication system” that includes a brokerage server, a funding server, and also an electronic communications devices that are designed to provide certain authentication signalling to facilitate a payment. The claim itself is 1,200+ words 5x longer than a typical independent claim. In briefing, Fote explained that:

By dividing responsibilities for the payment and the information among multiple third parties, the payment system invented by Fote avoids the privacy and security vulnerabilities that would otherwise arise if a conventional third-party intermediary were employed in an electronic environment. . . .

[Although the] system involves conventional computer components[;]… [t]he system’s novelty and inventiveness, which have been acknowledged by the Patent Office, lie in the specific payment techniques it implements.

In its briefing, the PTO responded that the claims can be seen as parallel to the settlement risk mitigation system in Alice Corp. and that the Board’s decision was correct:

The Board properly concluded that the claimed invention is directed to patent ineligible subject matter. Claim 8 recites a system for transferring electronic payment from a payer to a payee that utilizes a third-party intermediary to prevent disclosure of the payer’s confidential information (i.e., the identity of the payer’s funding source and real account) to the payee.

Under step one of the Supreme Court’s two-step framework, the Board rightly determined that the claim is directed to a fundamental economic practice, which is an abstract idea. As the Board found, the use of a third-party intermediary to securely transfer funds between two parties is akin to the use of a third party to mitigate settlement risk, which was held to be abstract in Alice. . . .

At step two of the eligibility analysis, the Court rightly determined that the additional claim limitations do not transform the abstract idea into an inventive concept. Each of those limitations merely recite conventional computer components that perform generic computer functions. Although the Board did not cite to this Court’s decision in Berkheimer v. HP Inc., 881 F.3d 1360 (Fed. Cir. 2018), the Board did provide factual support in the specification to support its findings that the claim elements were well-known, routine, and conventional.

Gov’t Brief before the Federal Circuit.  The actual merits are rough here for the petitioner, but these are the cases that often make good procedural law.

27 thoughts on “Does an appeal deserve an opinion?”