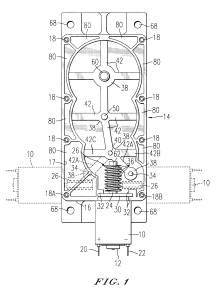 In a divided opinion, the Federal Circuit affirmed the district court’s summary judgment against the patentee Molon — holding that a 2006 covenant-not-to-sue remained in force despite a subsequent 2007 settlement agreement stating that prior covenants “concerning the subject matter hereof” are “of no further force or effect.”

The Subject Matter of a Contract: The majority opinion penned by Judge Lourie and joined by Judge Hughes concludes “that the two agreements concern different subject matter” and and thus finds the merger and cancellation clause inapplicable.  Writing in dissent, Judge Reyna came to the opposite conclusion since both the 2006 covenant and the 2007 settlement agreement focused on a license to practice the ‘915 patent.

Judge Reyna in dissent. Judge Reyna appears to have the better argument — although not good enough to convince Judges Lourie and Hughes.  Further, Nidec’s counsel Rudy Telscher did an excellent job marshaling Illinois cases that supported his client’s position.

The difference in interpretation between these judges is a matter of contract interpretation under Illinois law. Unfortunately, the majority’s statement of Illinois law is not too helpful: “Illinois courts have cautioned against defining ‘subject matter’ too broadly or too narrowly.”

Some Background on the First Lawsuit: Molon sued Markle-Korff on family-member patent (US6054785), and the defendant responded with a declaratory judgment couinterclaim against Molon’s Patent (US6465915).  At that time, Molon was not interested in litigating the ‘915 patent and issued the 2006 covenant-not-to-sue.

Molon hereby forever covenants not to sue Merkle-Korff for patent infringement … under …
the ’915 patent … with respect to any and all products previously or presently made,
used or sold by Merkle-Korff in the United States. …

2007 Covenant. The district court dismissed the ‘915 patent claims but that first lawsuit continued with Molon’s originally filed infringement claims regarding the ‘785 patent.  In 2007 the parties settled the ‘785 lawsuit with an exclusive license agreement that extended beyond the original lawsuit itself to include more than a dozen Molon patents (including foreign patents and the ‘915 patent).  A difference between the 2006 covenant and the 2007 settlement was the scope of license.

Fast forward to 2016 — Molon filed a new lawsuit against Nidec — successor in interest to Merkle-Korff.  The new suit alleges that Nidec is selling beyond the Kinetek market and the big question here is whether the original broad covenant is still in effect.

For the majority, the big difference between the two promises is exclusivity:

Id.  The holding here then is that the original covenant was not cancelled — and so the patentee has no case.

One interesting additional issue not addressed here is the extent that a unilateral covenant-not-to-sue can be revoked, even by agreement. If we think of the covenant as a conveyance (of property rights), a revocation would ordinarily be insufficient to transfer rights back to the patentee. Rather, we would need an express conveyance or release.  A covenant-not-to-sue could also be seen as an abandonment of rights — something like a ‘release.’  Historically courts have distinguished between a release and a covenant-not-to-sue, although that distinction appears to have lifted based as covenants now operate as a complete bar to a subsequent underlying action rather than their historical role of only creating a breach of contract action. See Skilstaf, Inc. v. CVS Caremark Corp., 669 F.3d 1005, 1017 (9th Cir. 2012).

11 thoughts on “Cancelling a Covenant-Not-To-Sue”