Most patent infringement litigation reaches the Federal Circuit under the “final judgment rule” which creates appellate jurisdiction over cases “appealed from a final decision of a district court.” 28 U.S.C. 1295(a)(1).  Final decisions “are decisions that end litigation on the merits and leave nothing for the court to do but execute the judgment.” Slip op.; Coopers & Lybrand v. Livesay, 437 U.S. 463, 467 (1978).  Thus, in a patent case involving infringement claims and invalidity defenses, both must be resolved before appeal.  (Note here, that there are some, albeit limited, options for interlocutory appeals prior to final judgment).

In Amgen, the district court issued an infringement decision (against Zydus) but did not resolve questions of whether the asserted patent is valid and enforceable — explaining that:

The Court has not yet held trial on Zydus’ bifurcated invalidity counterclaims and defenses. . . . An invalidity trial will be scheduled by this Court if necessary following disposition of appeal proceedings.

Zydus brief.   Amgen also did not challenge jurisdiction in its briefing.  However, the appellate court is obligated to ensure itself of jurisdiction before moving forward.

At oral arguments, the appellate panel recognized the problem and questioned Zydus’s attorney during oral arguments who – after consulting with his client in the courtroom – agreed to “give up” its invalidity defense. [Oral arguments beginning at min 18].   In its decision, the Federal Circuit found that concession sufficient to cure jurisdiction. “Zydus’s representation effectively cures the jurisdictional defect in its notice of appeal because the contingency identified by the district court—Zydus’s potential invalidity defense and claim—is nullified.”

Too Short Analysis: The Federal Circuit did not cite any precedent or statute to support its conclusion that the oral-argument waiver can cure the lack of final judgment.  The procedure principles here fall within the umbrella of “cumulative finality.”  Most courts have accepted the notion that a premature appeal can be cured by a subsequent entry of final judgment by the district court.  However, some courts have taken an alternative approach. Here is how Prof. Lammon explained the situation in his recent article:

The general rule cannot be stated any more precisely, however, because the cumulative finality doctrine is currently a mess.

Bryan Lammon, Cumulative Finality, 52 Ga. L. Rev. 767 (2018).   In his article, Lammon explains that the Eighth Circuit along with the Federal Circuit have traditionally held the narrowest views of cumulative jurisdiction and has previously required appellants to re-file their case after a proper final judgment rather than curing appellate jurisdiction on the fly.  Lammon does not address whether the Federal Circuit should be following its own law on this issue or instead be applying the law of the regional circuit court of appeals.  In a separate paper on finality, Lammon also explains that the meaning of “final decision” is not quite the simple definition that I used above.

The federal courts have given the term “final decision” a variety of meanings. Those meanings often deviate from–and are occasionally inconsistent with–the standard definition… 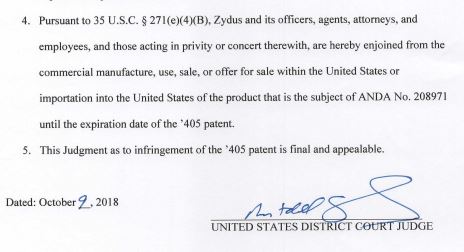 Thus, it looks to me like Zydus’ attorney had a proper grounds for jurisdiction without giving-up its invalidity defense.

If you want it, Claim it

= = = = =
Prof. Lammon has also briefly written about the case on his blog “FinalDecisions.org“.
Hide comments