The PTAB sided with Microsoft — finding the challenged claims of Mira’s two challenged patents obvious. U.S. Patents 8,848,892 & 9,531,657.  On appeal, Mira hired new counsel and argued for an alternative claim construction of the term “contact list.”  Figure 1 in the claims is described in the patent as “the database structure of contact list of present invention.”  The idea here is to have a “memo” interface tightly incorporated into a contact list. 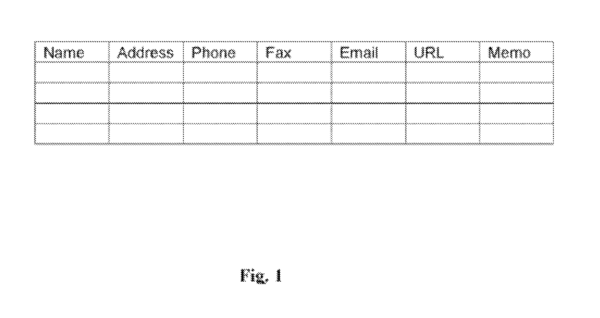 Microsoft’s attorney Chris Carroway responded to the appeal with a motion for sanctions:

An appeal is not a mulligan. While a party is certainly free to retain new counsel to pursue an appeal, that new counsel is not free to raise new arguments that could have been made, but were not made, on behalf of the client before the first tribunal. An appeal premised on such new arguments—arguments waived because they were not presented to the first tribunal—is futile and, therefore, frivolous.

MicrosoftMotionForSanctions.  Mira then responded with a discussion of de novo claim construction — arguing that the main question on appeal is the correctness of the Board’s construction — which was vigorously argued before the Board.

In the appellate court, sanctions for frivolous appeals are handled under Federal Rule of Appellate Procedure R. 38:

If a court of appeals determines that an appeal is frivolous, it may, after a separately filed motion or notice from the court and reasonable opportunity to respond, award just damages and single or double costs to the appellee.

FRAP 38.  In its judgment, the Federal Circuit did not delve into the merits of either claim construction or the sanctions. Rather, the court (1) issued a R.36 affirmance of the Board’s decision in Microsoft’s favor and (2) denied the sanctions without explanation.  The oral arguments included some limited discussion of whether sanctions can apply to a appeal that is weak on the merits — or must there be additional misconduct or failed lawyering.

Underlying the IPR is a pending lawsuit in West Virginia involving the patents at issue. That case has been stayed since 2017 – pending resolution of the IPR proceedings. The court now won’t have to decide Microsoft’s pending motion to dismiss on 101 and for improper venue.