After Andrea sued Apple for infringing its U.S. Patent 6,363,345 (noise cancelling audio signal processing), Apple responded with two inter partes review (IPR) petitions.  The PTO initiated both petitions and eventually cancelled all of the claims except 6-9.  Apple then appealed – asking that they all be invalidated. 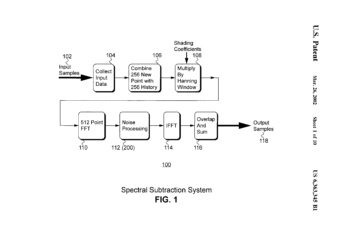 The invention sets noise-thresholds for a set of frequency groups and subtracts-out amplitude beyond a calculated “future minimum value.”  Claim 6 does this on a periodic basis.

In the original IPR ‘626 petition, Apple argued obviousness of the claims based upon Hirsch over Martin.  In its responsive briefing during the IPR, Andrea argued that Martin does not disclose the “future minimum value” as claimed in claims 6-9.  Then in reply, Apple explained that obviousness becomes clear when seen over multiple periods (sub-windows).  However, the Board refused to consider Apple’s reply – finding that the multiple sub-window argument “raised a new theory of unpatentability for the first time in its reply brief.”

On appeal, the Federal Circuit reversed this holding — concluding instead that the reply brief did not offer a new argument:  “Its reply still asserted that claims 6–9 would have been obvious over Hirsch and Martin [and] relies on the same algorithm from the same prior art reference to support the same legal argument: that Martin
discloses the … “future minimum” limitations of the asserted claims.”  In its decision, the Federal Circuit distinguished prior cases where the reply brief cited to new evidence or new portions of already cited evidence.

The issue here is age-old. A good reply brief should do more than simply rehash the exact statements found in the original brief. At the same time, the reply should not be introducing new arguments that go beyond the original brief.  Consider the following interesting article: John F. Muller, The Law of Issues, 49 Wake Forest L. Rev. 1325 (2014)

On remand, the PTAB will now consider Apple’s reply brief and whether its argument is sufficient to render the claims obvious.

8 thoughts on “What Counts as a New Argument in Reply”