Attorney Fees following Voluntary Dismissal: I recently posted a note on the Keith Manufacturing decision allowing for an attorney fee motion following a Fed. R. Civ. Pro. R. 41(a)(1)(A)(ii) stipulated dismissal with prejudice.  Mossberg involves attorney fees following a R. 41(a)(1)(A)(i) dismissal without prejudice.  The appellate court ultimately refused to award attorney fees against Mossberg because the dismissal was “without judicial imprimatur” and thus leaving no “prevailing party.”  As I note bellow, Keith and Mossberg are in some tension, even though both were penned by Judge Hughes and published less than 1-week apart.

(a)(1)(A) Voluntary Dismissal by the Plaintiff Without a Court Order:

… [T]he plaintiff may dismiss an action without a court order by filing:

(i) a notice of dismissal before the opposing party serves either an answer or a motion for summary judgment; or

(ii) a stipulation of dismissal signed by all parties who have appeared.

(B) Effect. Unless the notice or stipulation states otherwise, the dismissal is without prejudice.

Following dismissal, Timney asked for attorney fees — arguing that it won the lawsuit. Although the lawsuit was dismissed without prejudice, the collateral cancellation meant that Mossberg would not be able to sue again. Complete win for Timney.

The court in exceptional cases may award reasonable attorney fees to the prevailing party.

While the district court’s statement of the law is off a bit, the Federal Circuit affirmed the holding that attorney fees are not available for this type of voluntary dismissal.  In particular, the court decision does not need to be “on the merits,” but it must result in a “material alteration of the legal relationship of the parties” and “be marked by judicial imprimatur.” CRST Van Expedited, Inc. v. E.E.O.C., 136 S. Ct. 1642, 1646 (2016).  CRST involved a Title VII action for employment discrimination.  That provision of the Civil Rights Act of 1964 includes a “prevailing” party provision for attorney fees that is similar to the Patent Act (“the court, in its discretion, may allow the prevailing party … a reasonable attorney’s fee.”).

Both Mossberg and Keith were penned by Judge Hughes.  Hughes is seemingly a good choice for these cases because of his decades of experience as a civil litigator at the Department of Justice.  But, the two cases are in tension.

In Mossberg, the court explains that there was not “judicial imprimatur” because the case was voluntarily dismissed by the parties under R.41(a)(1).  In distinguishing from prior cases where courts had dismissed cases on non-merits grounds, Judge Hughes writes “[i]n this case, there was no such final court decision [because a] properly filed Rule 41(a)(1)(A)(i) voluntary dismissal becomes effective immediately upon plaintiff’s filing of the notice of dismissal. . . . Because there is no final court decision here, Timney cannot be a prevailing party for purposes of attorney’s fees under § 285.”

Keith also involved a voluntary dismissal under R.41(a)(1) and did not require a court order. Judge Hughes explained this as part of his decision:

In April 2017, the parties filed a stipulation of dismissal with prejudice pursuant to Rule 41(a)(1)(A)(ii). Such a dismissal requires no court order.

In his decision in Keith, however, Judge Hughes held that the voluntary dismissal without a judicial statement counted as a judgment for attorney fees purposes under Fed. R. Civ. P. 54(d)(2)(A).

Judge Hughes should have included a statement in Mossberg distinguishing Keith. There are two basic ways to distinguish these: (1) Keith focused on the “judgment” language found in R. 54(d) while Mossberg focused on the “prevailing party” language of 285. That distinction is strictly true, but both judgment and prevailing party indicate a sense of judicial action and the court offers no reason why that element of the analysis should be different for the two different statutes. (2) A second way to distinguish the cases is that Keith was a dismissal with prejudice; while Mossberg was without prejudice.  The dismissal with prejudice is accompanied by substantial judicial action if the parties ever attempt to relitigate; while the dismissal without prejudice is seen as a full reset.

As you might guess from the parties, the case involves a trigger assembly for a firearm. 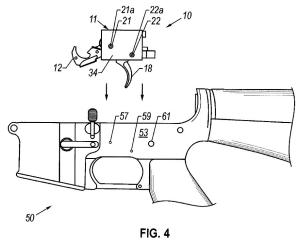