As TM owners willingly give up their racially disparaging and gender stereotyping marks, are there ways to ensure that the marks are not reoccupied by others wanting to free ride on their fame and infamy?

Quaker Oats says it plans to phase out its “Aunt Jemima” brand. The character has long been criticized as a stereotypical representation of black women as inferior servants. In recognition of the problem, the Company had been gradually revising the brand’s image and considering when might be the appropriate time to phase it out altogether. Of course, if taking a bold stand against racism had been their true intent, they would have taken much more decisive action to drop the brand long ago.

It’s also amazing that the brand knew that Aunt Jemima was racist and then instead of just changing it, they chose to instead slowly phase out the racism over time. That is so ridiculous. Can you imagine you caught your partner cheating and instead of stopping, they said, Yeah, yeah. You’re right baby. This is so wrong. I think I’m going to slowly start phasing out all of my affairs. From now on no sex, just hand stuff.

Amidst protests following the wake of George Floyd’s untimely death, Quaker Oats proclaims it truly does plan to take action to recreate the brand, although you would not know that from looking at its website one week after the announcement. As the screenshot below illustrates, no indication of abandonment appears on their pancake mix or syrup web pages. 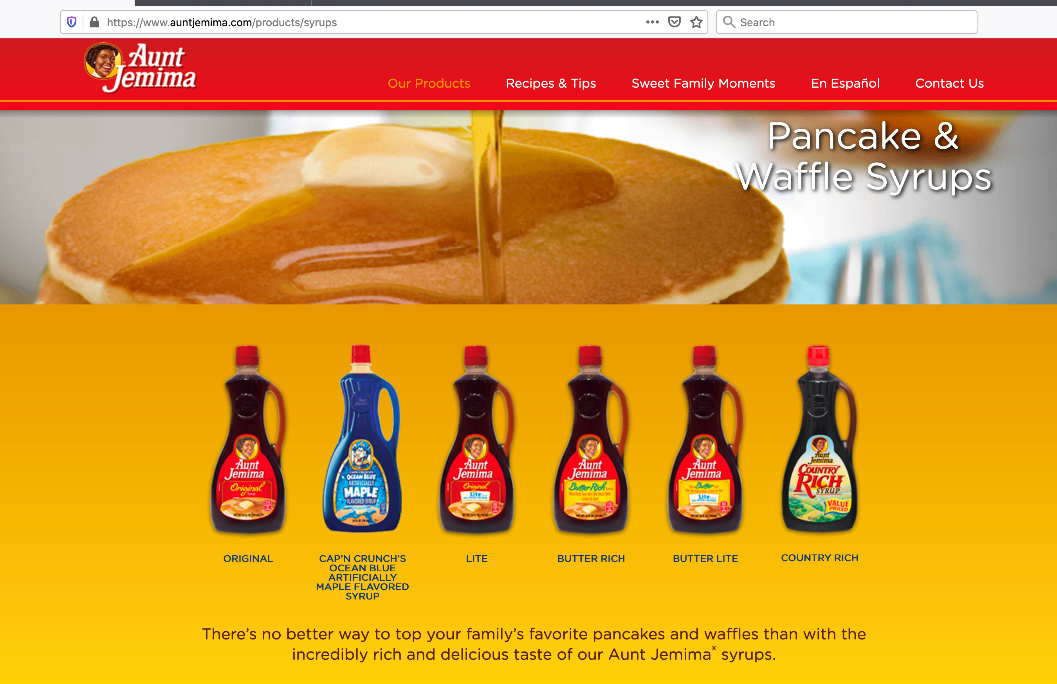 The current plan is hardly inspiring. It appears to be: “Let’s keep the admittedly racist mark in place until a suitably less racist substitute has been crafted.”

One of the potential ways to challenge a third-party registration of a racist brand was eliminated in 2017. For years Section 2(d) of the Lanham Act blocked registrations that disparaged a group of people. But despite this bar, the “Aunt Jemima” mark (and so many other disparaging marks) registered anyway.  Some however, were blocked or cancelled (including the Washington Redskins mark) on that basis before the Supreme Court held the bar unconstitutional in Matal v. Tam 137 S. Ct. 1744 (2017). Since that decision, the First Amendment right to free expression permits citizens to seek registration of racially offensive trademarks.

After Tam, the Quaker Oats plan to abandon the Aunt Jemima mark raises an interesting question: what if a third party were to seize the opportunity to pick up the well-known mark and double down on the racist stereotype? Are there strategies that Quaker Oats can use to minimize any consequential harm? For a fun take on what such a highjacking looks like, go here https://southpark.cc.com/clips/vlg1j1/from-one-redskin-to-another to see what happens when the Southpark kids adopt “the Washington Redskins” for their start-up after the registration was cancelled. Contrary to the suggestion in that episode, there at least a couple of strategies that may work.

The easiest option is to lean on the USPTO’s examiner corps. Even if the company ceases using the mark, the company’s portfolio of registrations will remain on the Principal Register until, one by one, they expire. If a new entrant to the syrup and pancake mix market applies to register “Aunt Jemima,” the Examiner would look at the Principal Register and see if any confusingly similar marks are still live. I predict that as long as Aunt Jemima lives on the Principle register, the marks will block others from registering confusing similar brands. We will not have to wait long to see if my prediction is right because on June 18, 2020, an individual in California applied to register “Aunt Jemima” for “Pancake mixes; Maple syrup; Pre-mixed pancake batter; Table syrup.” Something at the USPTO would have to go terribly against the norm for this application to succeed. Quaker Oats owns five registrations (and one pending application) for the brand, and some will not be up for renewal until 2025. Even if Quaker Oats took no action against the current applicant, the mark’s continued presence in the USPTO’s TESS data will give trademark examiners a clear and easy way to deny registration of the mark to anyone else until the last Quaker Oats “Aunt Jemima” mark expires.

This practice reveals that some trademark owners can succeed in blocking new entrants years after use has stopped. Although the Lanham Act ties trademark rights to use, for the sake of efficiency, USPTO trademark examiners treat third party federal registration as an irrefutable heuristic for use in office actions. When an Examiner blocks an application because the proposed mark is confusingly similar to one already registered, the USPTO treats the facts in the registration as true. Because Quaker Oats would not be a party to the applicant’s registration proceeding, USPTO examiners will not look into allegations of abandonment without Quaker Oats present to defend its brand. The company’s current “Aunt Jemima” registrations will be more than sufficient to deny the new entrant registration. However, if Quaker Oats opposed the registration, the new entrant could raise the defense of abandonment. Therefore, Quaker Oats would be smart to stay quiet and let the USPTO take care of the matter. If the new entrant had the chutzpah to seek cancellation of the Quaker Oats federal registrations, they would have to respond to the applicant’s claim that “Aunt Jemima” was available because Quaker Oats abandoned use of the mark and expressed a clear intent not to resume its use.

Beyond the arena of registration, there are alternatives for Quaker Oats to explore if someone were to actually start using the “Aunt Jemima” mark in commerce, whether or not the new entrant sought registration. The Lanham Act is broad enough to assert a claim against a new adopter even if the original trademark owner abandoned the mark as a matter of law as long as consumers still draw a connection between the “Aunt Jemima” mark and Quaker Oats. The language of 15 USC 1125(a) may support a cause of action for false sponsorship, false affiliation or false designation of origin or state unfair competition if a new entrant used the mark in commercial advertising in a way that causes Quaker Oats harm.  Contrary to what the Redskins (the football team not the start-up) owner claimed in the South Park skit, there actually is something a trademark owner can do, and much that the USPTO will do for a trademark owner both before and after the mark has been abandoned.