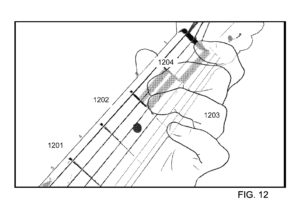 Ubisoft (Rocksmith) and Yousician are competitors in the music-lesson software market.  Truthfully, I really enjoy using these tools — their main problem is the added screen time.

In 2018, Ubisoft sued Yousician for infringing its U.S. Patent 9,839,852 covering an “Interactive Guitar Game.”  Before the opening act even started, the district court dismissed the case on failure-to-state-a-claim. Fed. R. Civ. Pro. 12(b)(6).  In particular, the court found the claimed invention to be improperly directed to an abstract idea. On appeal, the Federal Circuit has now affirmed.

The claims at issue are directed to functional software stored on a computer drive — “a non-transitory computer readable storage medium with a computer program stored thereon.”  The claimed software is designed “present an interactive game for playing a song on a guitar” by causing the computer processor to take the following steps:

show finger notations on a display device (corresponding to the song to be played by a user);

receive audio input from the guitar that corresponds to the song played by the user;

generate a “mini-game” targeted to improving the user’s skills associated with problematic portion.

Human tutors have worked in the music lesson world for a long time. Some folks are self-taught, but it is a pretty big deal to have responsive computer software that actually works for helping learn guitar.  Within the claim, you can see hints of major developments of (1) accurately assessing performance and then (2) motivating learning through gamification.  The problem with the claims is that they are written in broad functional form without actually claiming how the results are accomplished.  In particular, the claims could be transformed by expressing the algorithms for assessing performance; changing difficulty level; or generating the mini game.  Taking all this a step further, the court looked to the specification and found only a description of “these steps in functional terms and not by what process or machinery is required to achieve those functions.”

Without those specifics, the court held that this is just taking a human tutor’s method and saying “do it on a computer.”

[The steps here are] thus no different from the ordinary mental processes of a guitar instructor teaching a student how to play the guitar.

62 thoughts on “Gentlemen. It has been a privilege playing with you tonight.”