Evolution Concept’s U.S. Patent No. 8,756,845 covers an AR-15 semi-automatic rifle converted to have a small fixed-magazine. (Sold as the AR Maglock).  The patent explains that the motivation for the change is to avoid the proposed “Assault Weapons Ban of 2013” in the wake of the Sandy Hook Elementary School Shooting.  That Bill (never passed) would have banned certain semi-automatic weapons with a detachable magazine.  However, California’s assault weapon ban created a market for the modification.  My understanding is that the proposed modification here is easy to undo as well in case someone wanted to go-back to having removable magazines. 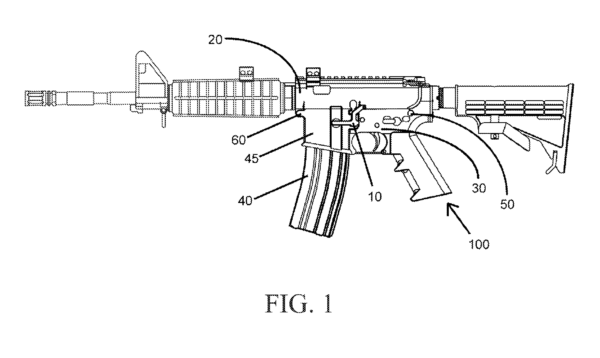 Evolution sued competitor Cross Armory for infringement and after some amount of litigation, the parties entered into a courthouse settlement agreement that Cross would pay 19% royalty for its sales of “every accused product.”  The parties also agreed to give Magistrate Judge Berg (who mediated the settlement) “authority to achieve finality regarding disputes” about the settlement and agreed that any decision by Judge Berg would be “FINAL AND BINDING WITH NO APPEAL.” The expectation here was that a more fully and complete agreement would be forthcoming.

Cross then refused to pay the amount Evolution thought it was owed.  Judge Berg ordered Cross to pay the money–finding that certain “kits” were also licensed products requiring royalty payments. Judge Berg also ordered the parties to sign a finalized agreement that he approved.

Cross then petitioned the Federal Circuit on writ of mandamus, which the court has now denied.

Right to Appeal: The court began its brief analysis with discussion of Cross’s waiver of its right to appeal.  The court explained “That agreement would seem on its face to waive further review of these decisions, or at least suggest that we should not exercise our discretion to review them.”

On the merits: The court went on to look a bit into the merits of the case — holding that “Cross has not shown a clear and indisputable right to its requested relief” and thus is not deserving of a mandamus order.

Cross’s basic argument was that its “kits” were not supposed to be included in the term ‘accused products.’  On appeal, the Federal Circuit noted that the original courthouse settlement agreement did not define the term.  However, Cross “consented” to having the Magistrate Judge decide all disputes regarding the settlement.  Further, there is no presentation of “any judicial usurpation of power or clear abuse of discretion” that might require action by a superior court.