By Colleen V. Chien, Professor of Law; and  Jonathan Collins,  Zachary J. Daly , and Rodney Swartz, PhD, all third-year JD students; all at Santa Clara University School of Law. This post is fourth in a series about insights developed based on data released by the USPTO.

“To truly advance innovation and human progress, we must all work to broaden the innovation community and make sure everyone knows that they, too, can change the world through the power of a single idea.”

As we wait for a life-saving COVID vaccine, each new day reminds us of the inequalities that the pandemic has laid bare. 30% of public school children lack internet or a computer at home, making school reopenings an urgent priority. Black and brown people, are dying at a much higher rate from Covid due to a complex set of factors, and are at higher risk of lacking access to prescription drugs because of cost.

Though only one part of the larger innovation ecosystem, the patent system has an important role to play in advancing inclusive innovation. Below we build on the USPTO’s recent leadership and the AIA’s recent inclusionary policies (regional offices, pro se/bono supports, fee discounts) to provide a few ideas: being a beacon for the innovation needs of underrepresented populations, addressing the patent grant gap experienced by small inventors, diversifying inventorship by diversifying the patent bar, and developing and reporting innovation equity metrics. These ideas draw upon the paper by one of us, Inequalities, Innovation, and Patents and earlier work, and the ongoing efforts at the USPTO to “broaden the innovation community.”

Historically, innovation for underrepresented and underresourced groups has been underfunded. For example, Senator and VP candidate Kamala Harris recently introduced a bill to fund research on uterine fibroids, which, though receiving scant research attention, disproportionately impacts African-American women at a rate of 80% over their lifetimes. Closing the broadband access gap will require innovative technology solutions to deal with the “last mile” problems that face rural and underserved populations. The USPTO can use its powers to accelerate innovation to meet the unique needs of underrepresented and underresourced groups, including, as was done in the context of the Cancer Moonshot initiative, identifying relevant patents and applications and combining patent data with external data sources for example from agencies like the National Institutes of Health and Food and Drug Administration. These efforts bring connect patented inventions to “upstream funding and R&D as well as downstream commercialization efforts.” To speed COVID innovation, the agency has taken a number of other steps including deferring or waiving fees, prioritizing examination, and launching a platform to facilitate connections between patent holders and licensees. These capacities could be directed to priority equity areas, which are positioned to benefit especially when private and public funding is at stake.

Expand Equality of Opportunity by Addressing the “Patenting Grant Gap”

When startups and innovation entrants patent, good outcomes often follow: first-time patenting is associated with investment, hiring, and economic mobility. But in many cases, the applications submitted by small entity inventors don’t actually turn into patents. Using open government data helpfully made available by the USPTO Open Data Portal (beta) we find, as documented in Fig. 1 below from the paper, that small entities are less likely to succeed when they apply for patents: by our estimate, applications filed 10 years ago have turned into patents 73% of the time vs. 51% for small/micro entities, a 40%+ difference.

Others including work by former USPTO Chief Economist Alan Marco, have reached similar conclusions. Empirical studies have also found that inventors with female sounding names, or who are represented by law firms that are less familiar to patent examiners are less likely to get patents on their applications than their counterparts. 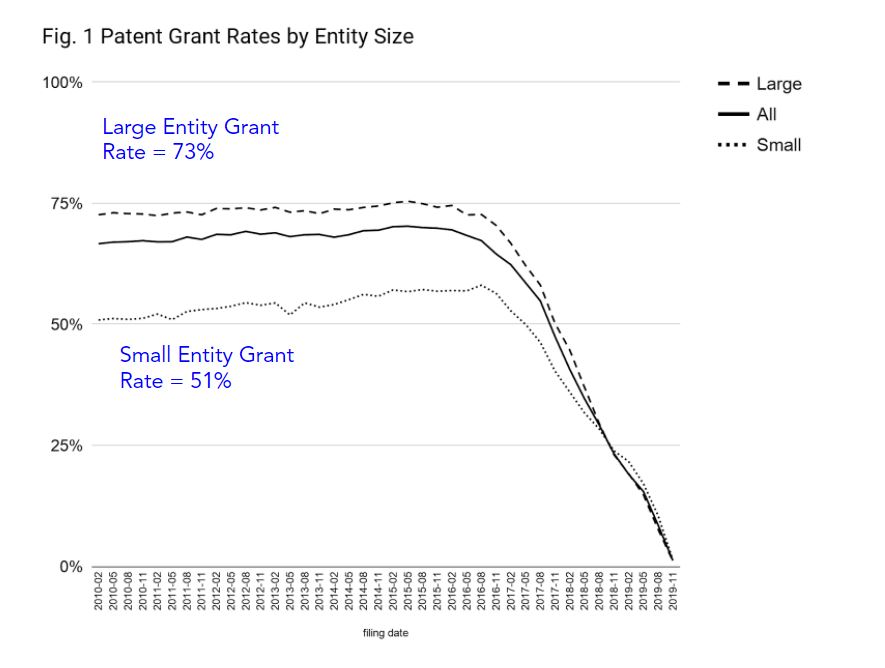 The difference in allowance rates may be due to any of a variety of factors, for example, a higher abandonment rate or differences in the types of patents sought. The possibility of implicit bias – based on inventor, or firm name – is also worth investigating further; the USPTO isn’t the only federal agency where the possibility of bias has been documented. But no matter the reason, ungranted applications to underrepresented groups present not only potential equity problems for society but also economic problems for the agency: applications that never mature into patents don’t generate issuance and maintenance fees.

One solution may be to try to improve the quality of underlying applications. As previously documented using PTO office action data, the applications of discounted entities are much more likely to have 112 rejections, and in particular 112(b) rejections. (Fig. 5A) A lack of “applicant readiness,” as described by examiners, may be one culprit. 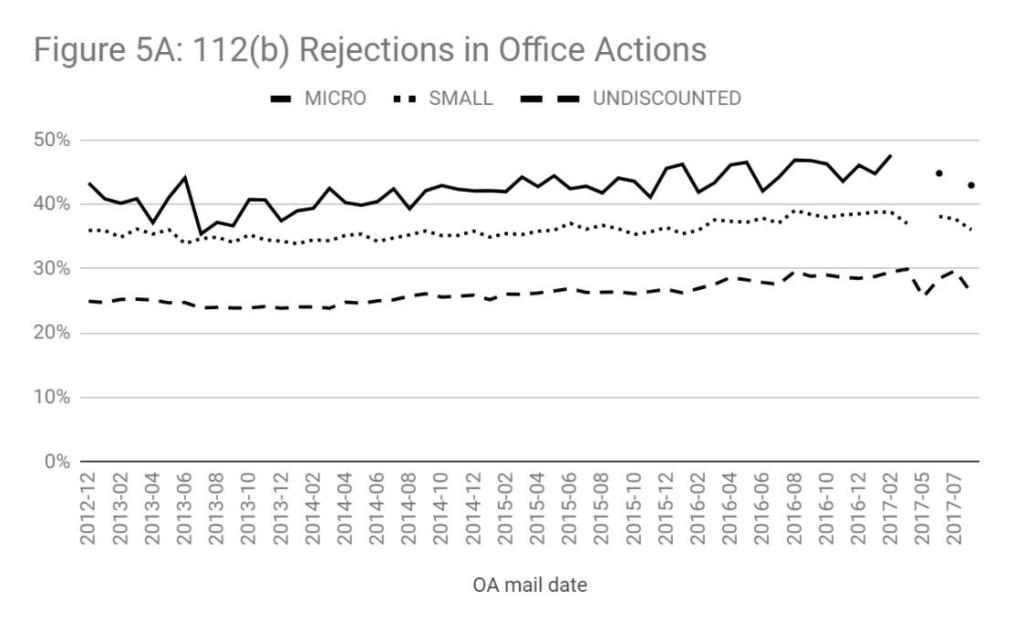 A promising approach as discussed previously by one of us would be to democratize access to drafting tools and aids, which are often used by sophisticated applicants to, for example, check the correspondence between claim terms and the specification. Using error correction technology to level the playing field in government filings, through public and private action, is precedented. Improved application quality advances the shared goal of compact prosecution, and to that end it is encouraging to see that the Office of Patent Quality Assurance, in their ongoing work to improve applicant readiness, is reportedly working to “identify opportunities for IT to assist with quality enhancements early in the process.” Such efforts could go a long way to address both the equity and economic challenges described above. We encourage continued investigation and prioritization of public and private efforts to address the “patent grant gap” in support of broader inventorship and participation in innovation.

As argued in the paper, patenting is a social activity that depends on social connections -“who you know and who you can call upon.” But access to patent talent is uneven – Sara Blakely, the founder of Spanx, has reported that she could not find a single female patent attorney in the state of Georgia to file the patent upon which she built her billion-dollar undergarments empire. To sit for the patent bar generally requires a science, technology, or engineering degree. But because of their underrepresentation among STEM, engineering, and computer science graduates, women, Black and Hispanic people are disproportionately excluded from participation.  The technical degree requirement particularly disadvantages those with design experience but not engineering degrees, who are often women, and who might otherwise want to prosecute design patents over fashion or industrial design, Christopher Buccafusco and Jeanne Curtis have noted. Relaxing the technical degree requirement would enable diversification of the patent bar, in support of diversifying inventorship and entrepreneurship.

Develop and Prioritizing Innovation Equity Metrics and What Works

While each year the number of new patent grants is announced, perhaps the patent statistic that has catalyzed the most action recently is the USPTO’s groundbreaking Progress and Potential series of reports which, for the first time, officially documented that only 12-13% of American inventors are women, and Director Iancu’s leadership and his staff on the issue. This report has prompted conferences and toolkits, and spurred companies to revisit their patent programs and pipelines. As additional resources are invested into making innovation more inclusive, “innovation equity metrics” that take advantage of the granularity, quality, and regularity of patent data, and that track, for example “inventor entry” and “concentration” and the geographic distribution of patents, as demonstrated in the paper, are worth investing in. Improved data collection, for example, of race and veteran status data, and federation and coordination with other datasets, for example held by the Small Business Administration, or in connection with the Small Business Innovation Research program, and Census could go a long way. Doing so would allow for more regular reporting and analysis of the overall health of the innovation ecosystem, which, by a few measures appears to be waning: as described in the paper, patenting by new entrants is down while the concentration of patent holdings is up. Surveys of underrepresented inventors, and what have been enablers and blockers, can also lend inform the development of policies of inclusion.

Though only one part of the larger innovation ecosystem, the patent system’s long-standing commitment to a diversity of inventors and equal opportunity position it well to answer the call of the current moment, for greater inclusion in innovation. We encourage readers with concrete ideas about how to advance inclusion in innovation, through the patent or other governmental levers, to submit them to the DayOneProject, which is collecting ideas for action for the next administration. For more, also check out the recent Brookings Report on Broadening Innovation by Michigan State Prof. Lisa Cook, a leading economist (see, e.g. the NPR Planet Money podcast, Patent Racism, about her work).

The authors represent that they are not being paid to take a position in this post nor do they have any conflicts of interest in the subject matter discussed in this post.  Comments have been disabled at the authors’ request.

45 thoughts on “Guest post: Advancing Inclusive Innovation and Entrepreneurship through the Patent System”