Chicago patent attorney Kevin Keener recently filed the following action in N.D. Ill. Federal Court.  You’ll note that the name of the patentee was filed under seal as was any identifying information about the asserted patent.  The infringers are unknown but likely “foreign” individuals and unincorporated businesses who are selling infringing items to US customers via Amazon.com and other “infringing webstores.”  Amazon has not been named as a defendant. 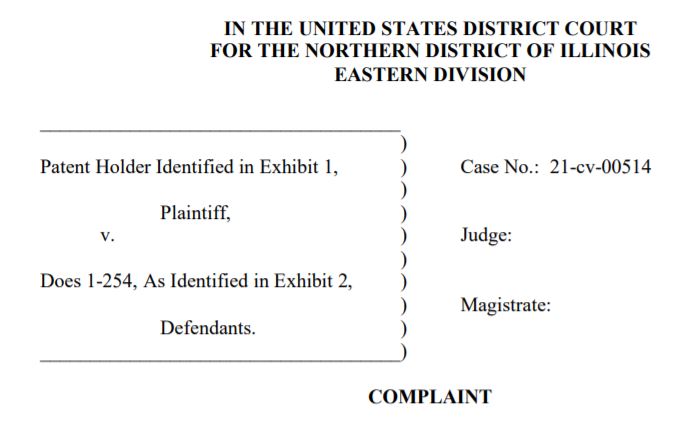 The patentee argues that the secrecy is important because of the “risk that Defendants will transfer assets or destroy evidence upon learning of Plaintiff’s identity and patent.”  The case has been assigned to Judge Matthew Kennelly as part of the Patent Pilot.

The complaint twice refers to its “design” and never to an “invention.” This makes me think it is likely a design patent case.

Although the defendants are unknown and are believed to be foreign, the patentee alleges that the N.D.Ill. “Court has personal jurisdiction over Defendants in that they transact business in the State of Illinois and in the Northern District of Illinois.”  Regarding venue, the complaint alleges lots of potential connections, but fails to cite the statement in 28 U.S.C. § 1391(c)(3) that a foreign defendant “may be sued in any judicial district.”

Presumably, the plaintiff may be seeking an immediate temporary restraining order under R.65.  However, the rules limit the court’s ability to act and at least require an “affidavit or a verified complaint” stating particular facts which  “clearly show that immediate and irreparable injury, loss, or damage will result to the movant before the adverse party can be heard in opposition.” Id. It is possible that such a document was filed under seal.