In 1966, the US Supreme Court decided Graham v. John Deere, and established the framework for adjudging obviousness under the 1952 Patent Act. In the processes Graham’s plow patent was deemed obvious.  In this new case, Deere is looking to invalidate Richard Gramm’s patent. This time though the patentee prevails. 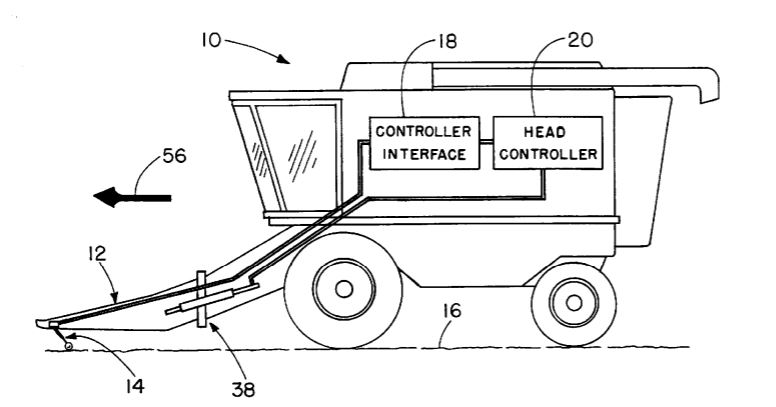 Gramm’s  US Patent No. 6,202,395 covers a sensor and controller for the head-height of a combine harvester.  The case is interesting because of its similarity to the spring-loaded shear in the 1966 case. Here, “a flexible sensor arm that engages the soil and is
dragged across the ground” as the giant tractor rolls along.

The particular novel aspects of the invention here appear to be related to what happens when the Combine is placed in reverse — we don’t want to bob to snap off.  The solution is a spring (“biasing means”) for keeping the arm at an incline but allows for displacement when you reverse.  The spring then uses Hooke’s Law to encourage the sensor arm to return to its original position. 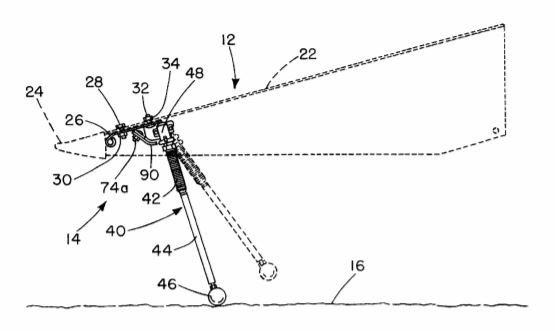 Deere petitioned the USPTO for inter partes review (IPR). Although the Board granted the petition, it eventually sided with the patentee and found that none of the challenged claims had been proven obvious. The case has included some partial institution mix-up following SAS, and the CAFC has previously affirmed the holding with regard to some of the claims, this appeal is related to claims 12-26.

Claimed Biasing Means: That spring discussed above – the claims require a “biasing means for urging said arm to a selected inclined orientation relative to
vertical …”  The parties agree that the claim term is properly interpreted as means-plus-function because “biasing” is a functional limitation rather than structural. Further, the patent document discloses a “coiled spring” that performs the claimed function. Thus – as required by the text of 112p6, the claim limitation is interpreted as requiring a coiled spring “and equivalents thereof” that performs the same function.

In the IPR, this limited view of “biasing means” was helpful to the patentee because it narrowed the scope of prior art that read upon the invention.  On appeal, the Federal Circuit confirmed that the prior art reference (US3611286) did not disclose the biasing means. An image from the prior-art patent is below.  To be clear, the reference does disclose a coiled spring, but it did not operate in the same way — to urge the arm to move toward an “inclined orientation.”

The true key controversy of the appeal was really about whether this issue should be reviewed de novo as a claim construction dispute or instead with substantial deference as a factual finding regarding the scope of the prior art.  As usual, the appellant wanted de novo review, but the Federal Circuit refused:

First and foremost, we reject Deere’s attempt to obtain de novo review of a factual finding by reframing it as though it presents a claim construction issue. . . . .

Here, after construing the biasing means limitation, the Board determined that [the prior art] did not teach the first function of the biasing means. That is a factual finding subject to appellate review for substantial evidence. . . . Deere attempts to contort the Board’s opinion by suggesting that the Board actually misconstrued the claim in such a way so as to not read on the teachings of Cleveland. We are not persuaded by that argument, which seeks to blur the clear delineation in the law between the two steps of the invalidity analysis.

Judgment Affirmed in Favor of Patentee