The first jury sided with Amgen, the patentee, finding that Regeneron had failed to prove that the asserted patents lacked enablement or written description.  On appeal, the Federal Circuit vacated the resulting final judgment and ordered a new trial based upon errors in evidentiary rulings and jury instructions.  On remand, the second jury again sided with Amgen.  The district court though favored the defendant and awarded Judgment as a Matter of Law (JMOL) for lack of enablement. On appeal, the Federal Circuit has affirmed. 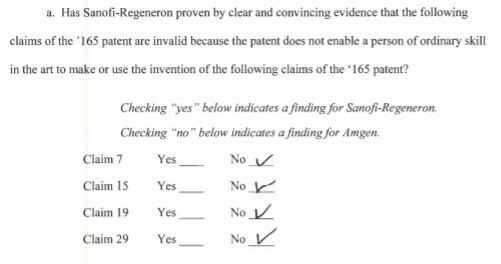 [Image of second verdict above]

The patents at issue claim monoclonal antibodies used to help reduce LDL-C levels. US8829165 and US8859741.  Amgen’s product is evolocumab (Repatha) and Regeneron’s product is alirocumab (Praluent).  Both drugs have been shown to be effective and each sell for around $14,000 per year.  In the lawsuit, Regeneron admitted to infringement, but challenged the patent’s enablement — arguing that the claims extend well beyond what was taught in the specification.

Anyone reading the claims will quickly notice that the claims are claimed functionally — the claims are basically directed to all monoclonal antibodies that bind to a particular portion of the protein PCSK9 and consequently block PCSK9 from binding with the LDL-C.

‘165 patent.   Sanofi argued to the jury that the claims encompass millions of potential antibody candidates and that the specifications lack sufficient guidance to allow a person of skill in the art to practice the full scope of the claims without undue experimentation in the form of substantial trial and error. Amgen provided contrary testimony: “The jury heard evidence from which it could conclude that the number of distinct antibodies within the claims was around 400.”  After hearing both sides, the jury found the claims enabled. But, Judge Andrews rejected the jury verdict and sided with the patentee — holding that no reasonable jury could have found otherwise.

Enablement: The patent act requires that the patent specification “enable any person skilled in the [relevant] art . . . to make and use” the claimed invention.  35 U.S.C. 112(b).  Like obviousness, enablement is a question of law based upon a collection of factual findings.  The Federal Circuit generally considers the Wands factors in enablement cases — particularly when asking whether the gaps in disclosure require undue experimentation.  The Wands factors:

The functional claim language and resulting potential for so many compounds fitting within the claim scope focus attention on the final factor — claim breadth. Although Amgen appears to have provided guidance and framework for creating and testing the efficacy of each of its claimed compounds, the problem is that there are many thousands of potential compounds — only some of which will actually work effectively as claimed.

[T]he scope of the claims is broad. While in and of itself this does not close the analysis, the district court properly considered that these claims were indisputably broad. . . . If the genus is analogized to a plot of land, the disclosed species and guidance “only abide in a corner of the genus.” AbbVie (Fed. Cir. 2014). Further, the use of broad functional claim limitations raises the bar for enablement, a bar that the district court found
was not met.

Although the court identifies the limitations in the claim as “functional” rather than structural. These particular functional limitations are important because they direct researchers in how to go about identifying compounds covered by the claims.  In other words, its not surprising that researchers would say that their invention is compounds that bind to PCSK9 — because that is exactly how they have been screening for the compound.  Amgen suggested a randomization-and-screening roadmap as a pathway for figuring out which antibodies would bind with PCSK9.  On appeal though the Federal Circuit held that that the the amount of experimentation was too much.

The functional limitations here are broad, the disclosed examples and guidance are narrow, and no reasonable jury could conclude under these facts that anything but “substantial time and effort” would be required to reach the full scope of claimed embodiments.

We therefore conclude that, after weighing the Wands factors, the court did not err in concluding that undue experimentation would be required to practice the full scope of these claims.

Slip Op.   Note, the court took care to suggest that it may be possible to enable an entire genus, but only perhaps. “We do not hold that the effort required to exhaust a genus is dispositive. It is appropriate, however, to look at the amount of effort needed to obtain embodiments outside the scope of the disclosed examples and guidance.”

In this case the burdens are important.  The jury found that the defendants had not met their burden of clear-and-convincing evidence of invalidity.  The district and appellate courts considered the same evidence and flipped — holding that the only reasonable outcome that a jury could reach is that the claims were proven invalid with clear and convincing evidence.

Amgen argued that that the potential breadth of the claims was “artificially inflated” by Sanofi; that the “millions” number was contested on the facts; and “A reasonable juror could easily have rejected Sanofi-Regeneron’s argument [as not] clear and convincing.”   On appeal, the Federal Circuit notes that they are “not concerned simply with the number of embodiments but also with their functional breadth,” although the court later appears to side with the defendant in concluding that “the evidence showed that the scope of the claims encompasses millions of candidates.”

This is a big case for enablement and I expect to see a petition for rehearing — likely with substantial focus on the standards for reviewing and rejecting a jury’s factual findings.

82 thoughts on “Functional Claim “Raises the Bar for Enablement””