Here is a fairly easy to understand video about  how this work:

The likelihood of winning an appeal certainly depends upon the merits of your case.  The second most important factor is the level of deference afforded to the lower-tribunal.   The Federal Circuit gives deference to any factual findings made by the PTAB in its IPR decisions.  In particular, a PTAB finding of fact will be affirmed if it is based upon “substantial evidence.”  The words “substantial evidence” might sound like a lot of evidence, it is actually a quite easy threshold.  A decision is based upon “substantial evidence” if it is supported by “more than an iota” of evidence or if “a reasonable mind might accept the evidence to support the finding.”  On the other hand, questions of law are reviewed without deference — de novo.

Obviousness is a question of law reviewed de novo.  However, the ultimate conclusion of obviousness is always based upon a large number of factual findings, “including the scope and content of the prior art, differences between the prior art and the claims at issue, the level of ordinary skill, and relevant evidence of secondary considerations.”   See my simple tip-of-the-mountain drawing below. 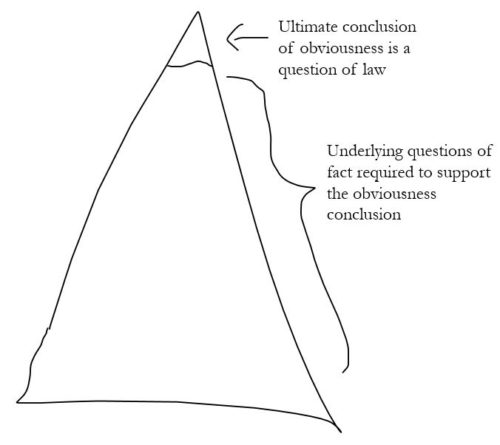 Here, the patentee challenged three factual findings by the Board, and the Federal Circuit found that each finding was supported by enough evidence to pass muster.  The three topics: motivation-to-combine; and two reasonable-expectation-of-success arguments.

The patentee argued someone skilled in the art would not have been motivated to combine an allyl capping group into a sequencing-by-synthesis approach.  Their particular argument, was that a prior art reference indicated some problems with use of the capping group and thus discouraged its use.  As supporting evidence, Columbia pointed to the fact that other researchers ceased related experiments after the reference was published.  On appeal, however, the Federal Circuit noted that this “teaching away” argument requires “clear discouragement” which was not proven. Although the reference did not show the experiment to be a smashing success, it also was not a failure.  Thus, while researchers might have considered better alternatives based upon the reference, it did not actually teach-away.

While it may be true that … scientists ultimately chose to research alternative capping groups, “just because better alternatives exist in the prior art” does not mean that an inferior alternative “is inapt for obviousness purposes.” Quoting In re Mouttet (Fed. Cir. 2012).

Thus, the PTAB’s finding of motivation to combine was supported by substantial evidence.