For the most part, Certificates of Correction are boring, simple, and quite common. 35 U.S.C. § 254 & 255 provide for correction of minor mistakes by the PTO and applicant respectively.  PTO mistakes are fixed when a mistake is “clearly disclosed by the records of the Office.”  For applicant-mistakes, the correction is allowed for “clerical or typographical nature, or of minor character” made in good faith.  Larger mistakes should be corrected via Reissue.  Errors can also be corrected as part of a reexamination or AIA trial (such as inter partes review).  In most cases applicants prefer the certificate of correction route because the procedures and approval process tend to be much more patentee friendly.  And, the minor corrections are more likely to have retroactive effect against past infringers.

The PTO grants the vast majority of requests for correction.  The most common denials are based upon the patentee’s failure to submit the correct forms. 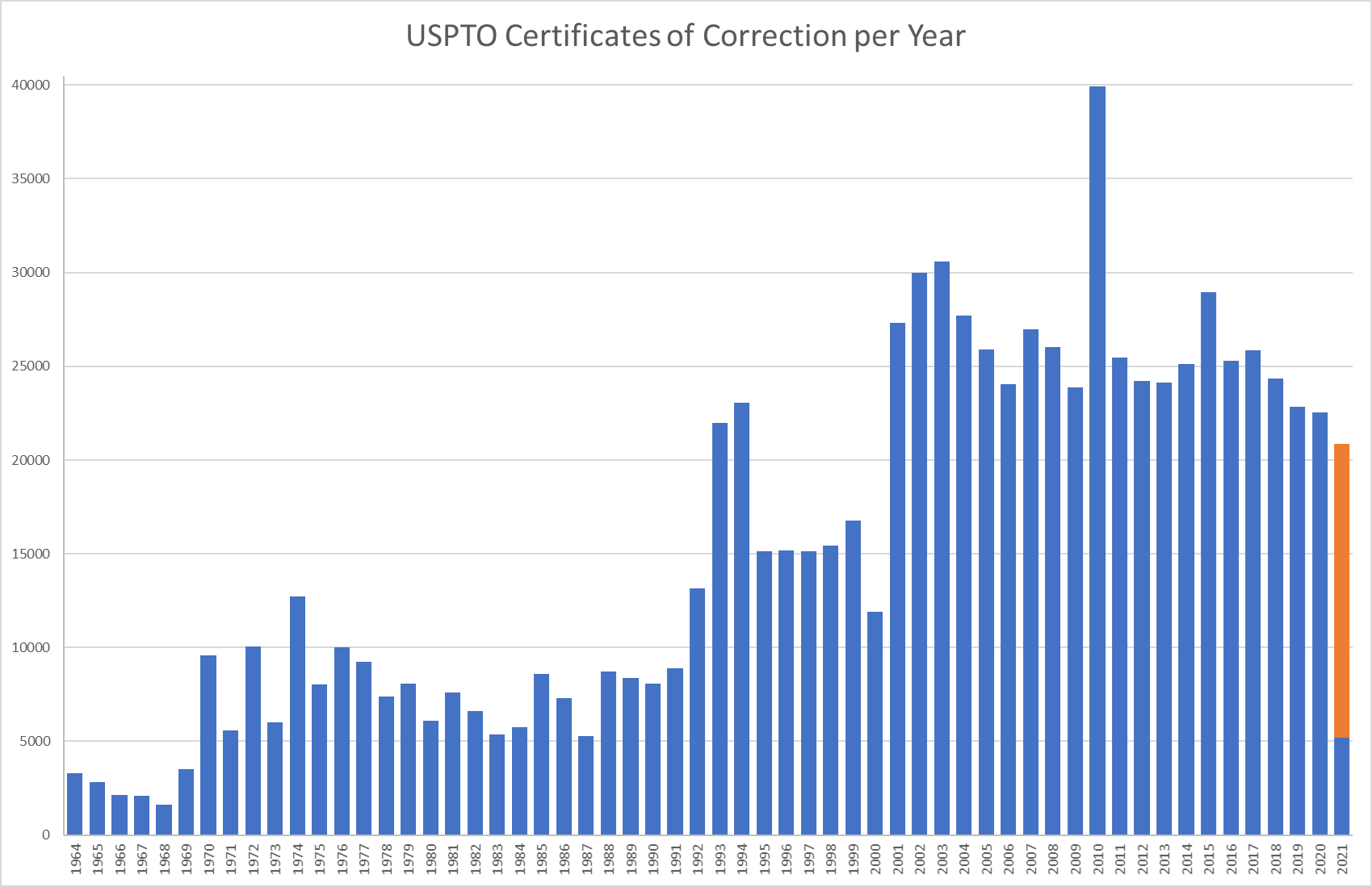 The chart above shows the number of certificates of correction issued by the USPTO each year with a forecast through the end of 2021.* The chart shows a fairly small downward trend over the past several years.  Although the trend above is fairly small, I believe that it will actually prove dramatic — with a ~50% reduction in the number of corrections issued moving forward.  We can see forecast with some more clarity in the chart below.

The next chart shows the percentage of patents that have been corrected (patents grouped according to the date they issued).  Since this data only goes through March 31, 2021, only a very small percentage of patents issued in 2021 have been corrected. There simply has not been enough time for the patents to issue and be corrected within this three month period.  On the other hand, the pre-2020 data is fairly accurate because  85%+ of corrections are typically issued within the first two-years of issuance.** 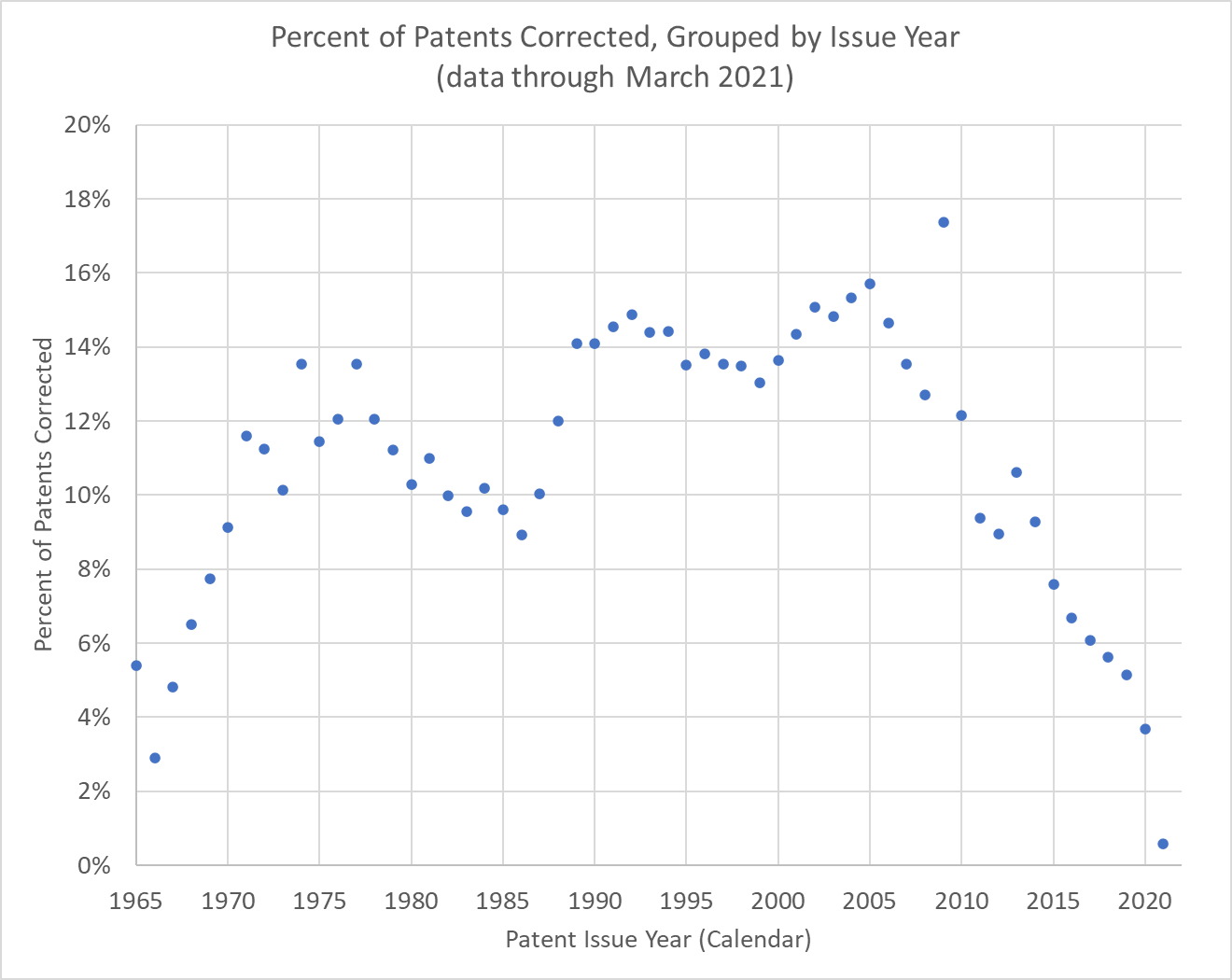 I wrote above that patentees would generally prefer to amend claims as part of a certificate of correction rather than within an AIA trial.  The correction process is simpler, there is no opposing party, and the PTO rarely demands much evidence.

In Honeywell Intl. Inc. v. Arkema Inc., 939 F.3d 1345 (Fed. Cir. 2019), the Federal Circuit chastised the PTAB for creating roadblocks against a patentee from seeking correction in the midst of an AIA Trial.  The court explained that “the Director has not delegated its Section 255 authority to the Board.”  Id.  After the court decision, Honeywell was permitted by the PGR Panel to file a petition for Certificate of Correction of the priority claims.  “Honeywell’s mistake was inadvertently, i.e., unintentionally, failing to include a claim to the priority of three other Honeywell applications.” The petition was filed in May 2020 and is still pending before the Petitions Office.

The method of claim 25, wherein the data set includes a candidate’s name . . .

Here, the second “wherein” was clearly a typo and the petitions office agreed to the correction.  When the correction got back to the Board, the panel refused to take the correction into account — explaining that “shifting the scope of this proceeding to consider the corrected claims could impede the Board’s ability to meet its statutory deadlines. By declining to give effect to the correction, we keep the proceeding properly moored to the Petition that was the basis for instituting this trial.”  A final written decision is not yet issued in the case.

SIPCO, LLC v. Emerson Elec. Co., No. 2018-1364 (Fed. Cir. May 3, 2018) involves a situation where the Certificate of Correction issued after the PTAB decision cancelling the claims, but before the appeal was heard.  Rather than deciding the case, the Federal Circuit ordered the PTAB to address “what, if any, impact the certificate of correction has on its final written decision in this case.” Id.   On remand, the PTAB held that

** The large bump of 2009 patents was associated with a retroactive change in patent term adjustment calculation.  A cumulative frequency chart is provided below using certificates of correction issued Jan 2014 through March 2021. 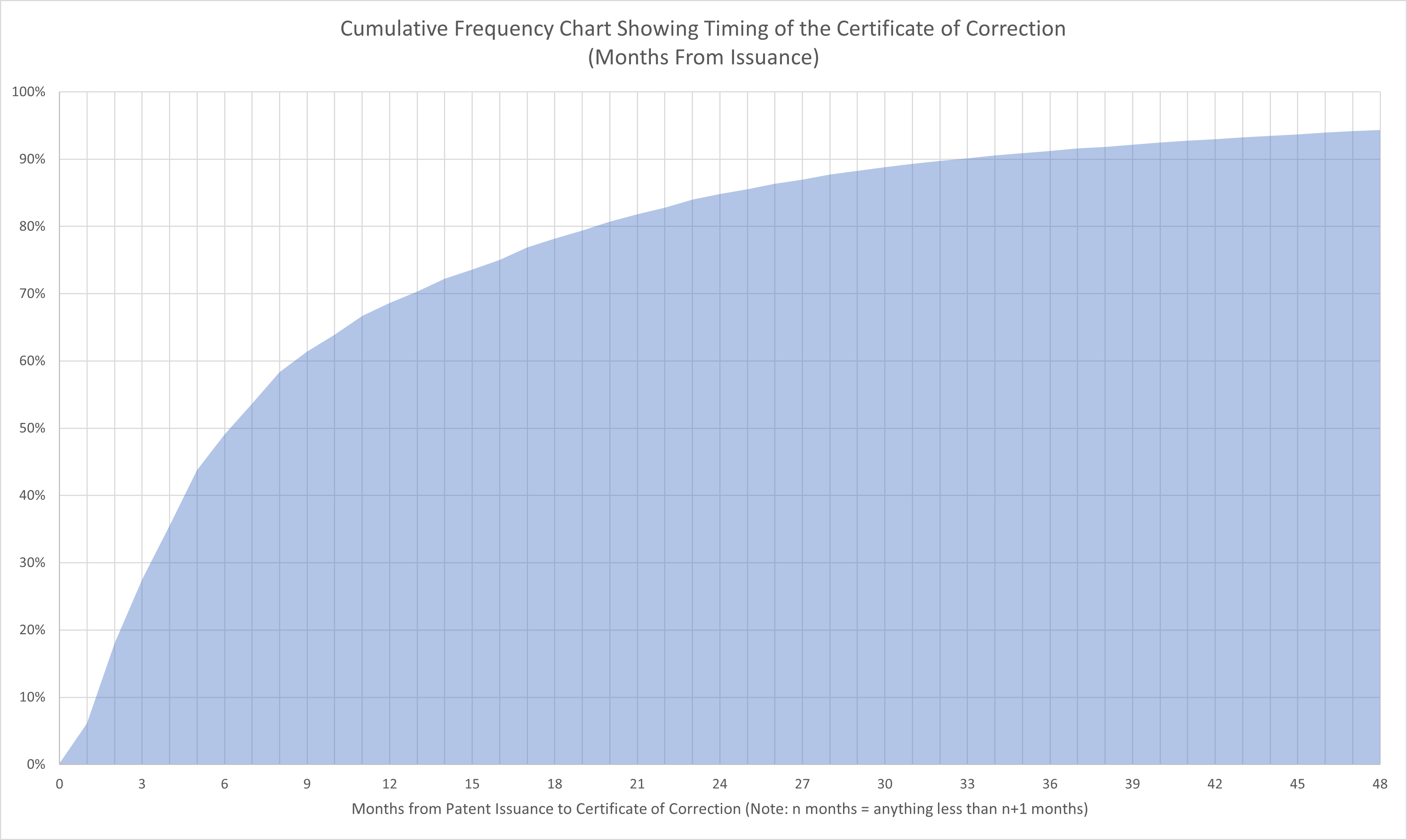 17 thoughts on “Certificates of Correction 2021”