The district court dismissed WhitServe’s patent infringement complaint with prejudice — finding the claims ineligible as a matter of law.  On appeal, the Federal Circuit has affirmed. WhitServe is the brainchild of patent attorney and inventor Wesley Whitmyer of Whitmyer IP Group.  The patent at issue here. U.S. 8,812,437. 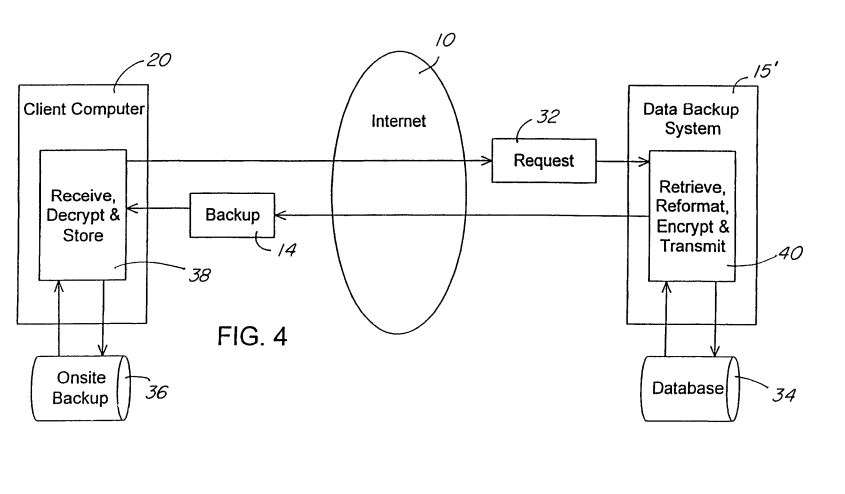 Claim 10, the focus of the case, is directed to an internet-based data-backup system and requires expected capability of “requesting, transmitting, receiving, copying, deleting, and storing data records.”  In the appeal, the Federal Circuit found that these activities are abstract ideas: “Such transmitting, saving, and storing of client records is a fundamental [and longstanding] business practice” and therefore an abstract idea.  Data storage at a generalized level is the focus of claim 10 and therefore claim 10 is “directed to an abstract idea.”

Here the system disclosed in claim 10 claims the computer function of maintaining data records, including storing records at different sites for  added protection. This is an abstract idea.

Slip op. In its analysis, the court considered WhitServe’s argument that its physical arrangement of the components offered a specific and technological improvement.  On appeal, however, the court rejected those arguments. The basic issue was that the claims (and specification) are all discussed at a too-high of a level of generality.  I see the following sentence as the key take-away line from the case:

Id. Adding the tech-features within the claim would certainly have been sufficient. Also, the court may well have accepted these same claims if the technical improvement had been simply disclosed in the specification with sufficient detail.  Of course, this implies that such a sufficiently-technical solution was available to the inventor.  This line also effectively eliminated the possibility of recovering the claim under Alice/Mayo Step 2.

The claims recite generic computer components performing routine conventional functions. Viewing claim 10’s elements in combination does not alter our conclusion because the claims lack a non-conventional and non-generic arrangement. Accordingly, we conclude that the ’437 patent does not disclose an inventive concept  and, as a result, does not transform claim 10 into patent eligible subject matter.

As part of its argument regarding eligibility, WhitServe had presented evidence of inventiveness, including secondary indicia of non-obviousness.  On appeal, the court disregarded that evidence as irrelevant.

Objecti[ve] indicia of nonobviousness are relevant in a § 103 inquiry, but not in a § 101 inquiry.

a central computer accessible by at least one client computer at a client site via the Internet for outsourced data processing;

wherein the location is accessible by the at least one client computer without using the Internet.

46 thoughts on “Want an Eligible Patent: Explain the Technological Advance in Sufficient Detail”