The chart below shows a measure of patent grant rate for a group of 30,000 recently completed patent prosecution cases. I reported earlier on the grant-rate differential based upon entity size classification: Large>Small>Micro. For this chart, I also added-in a second variable of whether the patent application filings were submitted by a registered US patent attorney or agent. As you might expect, those non-represented cases showed a much lower grant rate.

The most surprising result: Overall in this sample, I found that over 99% of patent applicants were represented by a US patent practitioner. An important note here is that the focus of this study was non-provisional utility application filings. I expect that the rate of true pro-se applications would be much greater if we looked at provisional patent applications. 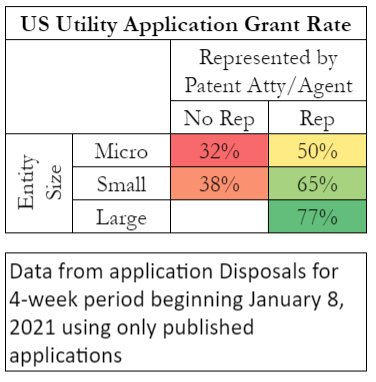 I collected data of “disposals” for a four-week period during early 2021. I coded my database to consider each published patent application and whether (1) a patent issued in the case; or (2) the application was abandoned during the four-week period. I also coded each case according to its entity size and also whether a US patent attorney/agent had participated in the case. To calculate the grant rate, I simply divided the number of issued patents by the total disposals (issued patents + abandoned applications). Note here that this calculation is a bit different from the disposals that the USPTO uses for its examiner counts.

Entity type (Micro, Small, Large) is available from USPTO documents for each published patent application. It was more difficult to determine whether a particular applicant was represented. About 90% of the cases include a listing of one or more registered practitioners representing the parties. That linkage is typically created when the applicant files a power of attorney. For about 8% of the cases, I was able to look through the correspondence addresses for law-firms, individual attorneys, and applicants known to employ patent attorneys in order to conclude that they were represented. The final 2% required a case-by-case inspection. For each of those, obtained a copy of the application data sheet (if any) to see whether an attorney/agent had signed. In cases without an application data sheet, I looked for some responsive filing to determine whether it had been so signed.

I limited the scope of cases to only those that had been published because the files unpublished abandoned applications are not available for inspection. This likely skews the data somewhat because Small & Micro entities are somewhat more likely to file non-publication requests. However, about 90% of applications are published and so the impact of unpublished cases should not be too great.

In this sample, 74% of cases were tied to large entities; 23% to small entities; and 3% to micro entities. There are some important caveats regarding these entity sizes. Generally, a small entity can still be quite large. The basic cutoff is 500 employees. In addition, patent application at issue cannot have been licensed (obligated) to a large entity.

§ 121.802 What size standards are applicable to reduced patent fees programs?

A concern eligible for reduced patent fees is one:

(a) Whose number of employees, including affiliates, does not exceed 500 persons; and

(b) Which has not assigned, granted, conveyed, or licensed (and is under no obligation to do so) any rights in the invention to any person who made it and could not be classified as an independent inventor, or to any concern which would not qualify as a non-profit organization or a small business concern under this section.

13 CFR § 121.802. In addition, non-for profits (including universities) count as small entities without any limit on size.

Micro entities are a creation of the America Invents Act of 2011 and allow for reduced fees for individuals without much patenting experience (<5 prior applications filed for themselves) and who are not unduly wealthy (<3x median US household income). Again though, universities can count as micro entities. In my sample, a number of the small and micro entities are universities with a higher grant rate than the average for their category.

Generally, the USPTO requires non-human legal entities to be represented by a patent practitioners.  Of the 22,000+ large entity filings in my sample, I found only 4 that were not represented by a US patent attorney/agent. Those cases appeared to me to be ones where the filer should have claimed small or micro entity status.

10 thoughts on “Grant Rate by Size and Representation”