There are two interesting patent provisions being debated in the Senate as amendments to bipartisan Endless Frontier Act S.1260.  Although it is difficult to tell exactly what will happen, the EFA Bill as a whole is likely to pass through the Senate. Both amendments were proposed in a bipartisan manner by Sens Tillis (R) and Leahy (D) and so also carry some weight.  This is being pushed through the Senate and so there are unlikely to be any hearings on these amendments.

Requirement of Recording: Most patent owners record their ownership interest, but many do not.  The proposal would require expressly require recordation of any foreign ownership:

[N]ot later than 90 days after the date on which a patent, or any interest in a patent of not less than 10 percent (in the aggregate), is assigned to any foreign entity or person, [the USPTO shall] require the recording of that assignment.

In addition, the proposal creates a penalty for failure to follow the recordation rules:

No party may recover, for infringement of a patent in any litigation, any monetary damages for any period in which ownership with respect to the patent is not properly recorded in accordance with the requirements of this subsection.

Since the current rules do not require recordation, it is unclear to me if this penalty would only apply to the new foreign ownership recordation requirement or would it apply to all forms of ownership.  Read my redline version of the proposal here: RedlineOfAssignmentProposal. 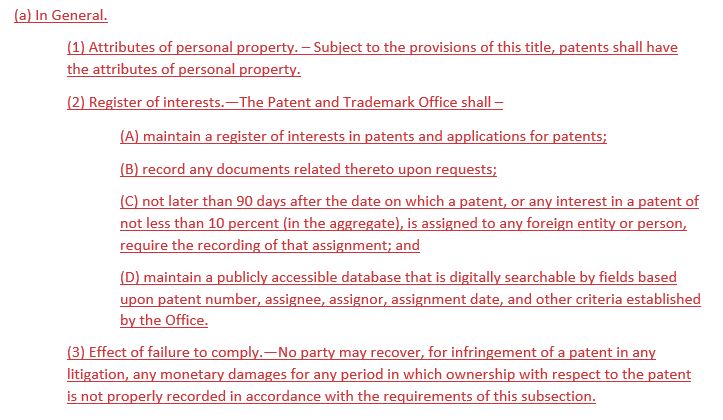 Although most patentees record their ownership, many do not. Non-recording is especially common among patent assertion entities.  As such, this proposal could potentially have a big impact (depending upon how it is interpreted) and would ate least generate further litigation regarding its applicability and effective dates.

41 thoughts on “Recordation Requirements and a Certificate of Unenforceability”