I wrote previously about Tiffany Cunningham who has been nominated to join the Court of Appeals for the Federal Circuit. Judge Wallach is set to take senior status at the end of May 2021. 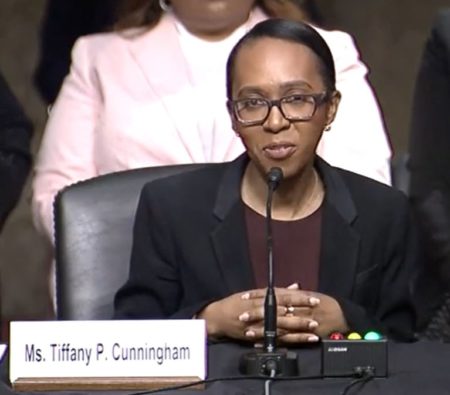 Today the Senate Judiciary Committee held its hearing on Cunningham’s nomination.  The Senate is quite busy to day and her nomination is not considered truly controversial as such there were only a few questions and statements.

Sen Durbin (Chair) and Sen Grassley (Ranking Member) both indicated that they would support the nomination (as did all other Senators who spoke).

Sen Booker: It is amazing that we are still doing “firsts.” Congratulations.

Sen Coons: Will you ensure access to independent inventors and small start-up companies?

Sen Grassley: Will you take a hard look at takings jurisprudence and protect personal property in cases from the Court of Federal Claims?

These days there is often not much to learn from the hearing because the nominees are coached to evade and generally answer along the lines of “Thank you for the question, I will endeavor to faithfully apply the law to the facts of the particular cases before me.”  The only real answer of interest telling came in response to a question from Senator Grassley.

Grassley: “Do you think it is appropriate for district judges to actively create favorable patent venues in their courts?”

Cunningham: Federal Judges should not be “really taking into consideration what sorts of cases they might want to appear before them.”

I expect that Cunningham will be confirmed by the Senate within the next few weeks.