Here, the CAFC has vacated a PTAB IPR decision based upon a sua sponte claim construction. The court found that the agency did not provide the notice and opportunity to respond required by the Administrative Procedures Act (APA).

Intel filed six different IPR petitions challenging Qualcomm’s US Patent No. 9,608,675.  The PTAB complied and cancelled the challenged claims as obvious.  On appeal here, the Federal Circuit has vacated and remanded — holding that the Board’s sua sponte claim construction in its final written decision was unfair to the patentee because it did “failed to provide Qualcomm adequate notice of and opportunity to respond.”

The invention here relates to mobile phone signal amplifiers, and particularly to  “power tracking” circuitry used to measure the the power amplification over multiple signals and carriers. (“a plurality of carrier aggregated transmit signals”, exemplary claim 1). 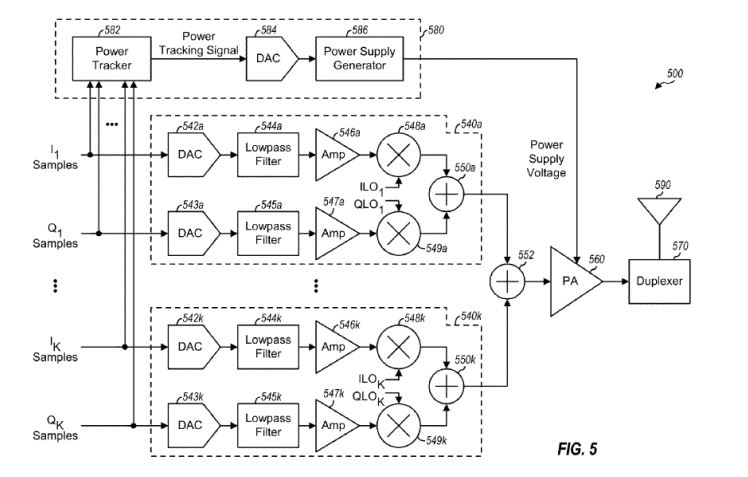 The patent makes clear that a key purpose of using multiple signals is to increase  a user’s transmission bandwidth, but exemplary claim 1 does not expressly require that result. Still, Intel asked the PTAB to construe the “plurality of carrier … signals” as having the purpose “to increase the bandwidth for a user.”  Although Qualcomm disputed portions of Intel’s proposed construction, it did not argue against that port. It simply was not at issue, most likely because the same patent claim had already been construed in a separate case before the ITC using that exact language.

During a post-briefing claim construction hearing, a PTAB judge asked Intel’s attorney for textual support in specification for the proposed “increase the bandwidth” construction.   At that point, the attorney responded that Intel would also “be comfortable” with removing the bandwidth portion as an element of the construction.  The judge later responded during the hearing that “we’ll think about whether [that limitation is] necessary.”  Qualcomm’s attorney did respond raise the issue during the hearing. And, prior to that time, the issue of increased bandwidth was not in dispute.  The following day, the Board issued its claim construction that followed Intel’s proposed approach, but without the “increase the bandwidth” requirement.

On appeal, the court found this process improper as a violation of the Administrative Procedures Act (APA) process requirements.

Collectively, these rules require that the patentee has notice of any grounds for cancelling its claims and also an opportunity to fully argue those grounds. The notice requirement does not require a formal summons served by a U.S. Marshall, but rather the Board must consider whether the parties should anticipate that the particular question is at issue.  In prior cases, the Federal Circuit found found when the PTAB “change[d] theories midstream or depart[ed] from a construction it previously adopted.”  Here, the situation was slightly different – an agreed upon claim construction.  Still, no one would anticipate that

Here, the patent owner agreed with the increased bandwidth requirement proposed by the petitioner. . . . it is . . . difficult to imagine either party anticipating that this agreed-upon matter of claim construction was a moving target. And, unlike with disputed terms, it is unreasonable to expect parties to brief or argue agreed-upon matters of claim construction. This is particularly true here given that a separate agency (the Commission) had already adopted the increased bandwidth requirement for the claim term. Accordingly, under the circumstances of this case, the Board needed to provide notice of and an adequate opportunity to respond to its construction.

One Judge?: The opinion makes note that only one judge (of the three-member panel) asked a question regarding the claim construction and then the same judge also made a comment indicating that panel will “think about” whether the particular limitation is necessary.

Slip Op. I believe the appellate court is trying to imply that questions or comments from a single judge provides less notice than if two or even three of the judges had made comments on point.  I have not previously heard of this partial tribunal doctrine.

So what. Errors generally must be meaningful in order to be appealable. Harmful errors vs harmless errors.  However, the Federal Circuit noted an ongoing open question as to whether an agency’s failure to comply with the APA requires harm.

Intel cites WesternGeco to assert Qualcomm’s APA challenge requires a showing of prejudice. We need not address whether WesternGeco requires such a showing because Qualcomm was prejudiced here.

In particular, Qualcomm had repeatedly argued that the prior art did not
“disclose the increased bandwidth requirement.”  “By removing that requirement [from the claims], the Board eliminated an element on which Intel bore the burden of proof.”

2 thoughts on “Adequate Notice and the Administrative Procedures Act”