Duncan Ironmonger and Simon Burgess founded the UK companies Scuf Gaming and also Ironburg with the goal of reengineering the gaming console.  Corsair purchased the companies in 2019, but by that time the litigation with Valve was well underway.  Ironburg won a $4 million judgment regarding two patents (now on appeal) and the district court stayed the litigation regarding U.S. Patent Nos. 9,289,688 and 9,352,229.  Those two patents are the subject of this appeal. 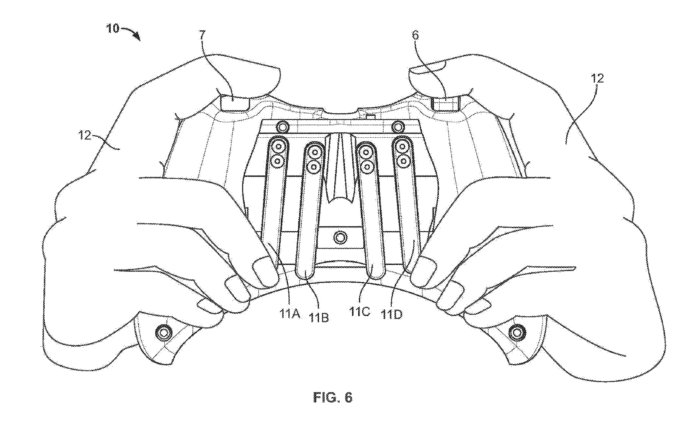 After being sued for infringement, valve filed inter partes review (IPR) petitions challenging the validity of Ironburg’s US Patent Nos. 9,289,688 and 9,352,229.  The Board split its decision, cancelling some claims obvious and left others in place. On appeal, the Federal Circuit has sided with Valve — upholding the obviousness determination and holding that the remaining claims may also be invalid.

The focus of the appeal is whether the purported “Burns” reference should count as prior art. Valve submitted a printout of Burns and argues that it was a printed copy of an online review of a Scuf controller from 2010.  The same reference had been submitted and cited in both patents, although Valve submitted a more recent print-out. 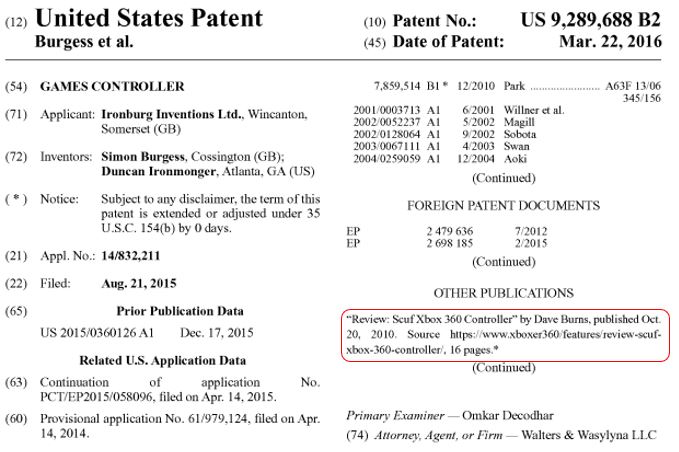 Authentication: Before relying upon a documented evidence, it must first be authenticated — a showing that the document “is what the proponent claims it is.” Fed. R. Evid. 901(a).  Here, the Board found that the Burns printout submitted by Valve had not been authenticated as the same document cited during the examination.  On appeal, the Federal Circuit quickly rejected that finding — holding instead that the new submission can quickly be authenticated by comparison.

Slip Op. The Board had refused to compare the two documents since Valve had not presented any testimony that the two were substantially identical.  On appeal here, the Federal Circuit found that the comparison here needed no testimony because the comparison was not burdensome. (10 pages, 23 images).

Isenburg also argued that the document had not been shown to be a prior printed publication. On appeal, the Federal Circuit found “overwhelming evidence” that the reference was prior art.   In particular, one of the inventors (Burgess) testified that he had facilitated the publication back in 2010 for marketing purposes.  The court also gave weight to an examiner statement during prosecution that the document was “published on October 20, 2010.”

Slip Op.  The applicant did not, at that time, dispute the examiner’s statements regarding the publication.   The court also looked to the IDS document where the applicant had stated that the document was published in 2010. Finally, the court also suggests that the PTAB should have relied upon the Internet Archive – Wayback Machine to further verify the authenticity.

35 thoughts on “Authenticating Prior Art”